From Uncyclopedia, the content-free encyclopedia
(Redirected from Youtube)
Jump to navigation Jump to search

For those without comedic tastes, the self-proclaimed experts at Wikipedia have an article about YouTube.

As mentioned before, YouTube was founded on February 14, 2005 by three employees of PayPal, who were probably in cahoots with Osama Bin Laden to create a site that would act as a forum for Taliban members to showcase anti-American videos and terrorist propaganda. However, Osama's disappearance, coupled with the posting of footage of a Basque separatist being hit in the groin with a football, led to a revolution in how the site was used. Osama's original idea for the site is now used on Pornotube.

“They said I couldn't witness the death of Hussein...then I met YouTube.”

~ George Bush on how YouTube has helped in the past

The first video posted on YouTube that wasn't a clip from Family Guy or of someone's pathetic dancing was Birth of a Nation, which was posted on November 30, 2005. This clip featured innovations such as deep focus, the jump-cut, and facial close-ups, all of which had previously been lacking from YouTube's original creations. On the other hand, this clip was criticized for being horribly racist, although many critics note that this was the prevailing attitude of the times. This was hugely influential on subsequent videos for its technical innovations, if not for its racism (although it did foreshadow the Censored Eleven and the Michael Richards race rant.) Meanwhile, literally tens of people were joining the YouTube.com online extravaganza. These users quickly got to work mimicing others and proving that they had absolutely no life.

YouTube also manages its vocabulary and layout as not to offend anyone.

Despite this sudden surge of activity, YouTube began to slowly slip into unexpected bankruptcy. This was made even worse when Viacom, a premier douchebag company, attempted to sue YouTube for one billion dollars (presumably because of the crappiness of its videos). Upon discovering that YouTube was at its weakest, Google decided to buy the company for 900 euros ($1.65 billion USD). By merging YouTube and Google Video™, the damages caused by copyright violation were expected to double. Nevertheless, YouTubem under its new rule, decided to attempt to stamp out copyright, a feat achieved by no one, in the context of YouTube. Despite its video deletion rate of 7 videos per second, an astonishing 99.93% of the (roughly) trillion videos on YouTube remain unwatched, as 99.93% of those are just out-of-sync copies of rips of copies of rips. A vast majority of users choose only to watch fat kids lip synch to Eastern European pop songs. Pokemon movies are also very popular, especially self proclaimed "crappy" fan-made ones. 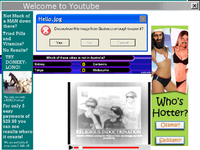 YouTube, as any website, sees its design as a crucial point. The original design, based on 30's Nazi propaganda, had the video located squarely in the middle of the page, with a useful bar underneath to show when it would end. The YouTube logo, also fashioned after the Nazis, was in the top-left corner, and the description of the video, as well as related videos, were on the right side, the side usually used as advert space on other sites and hence the most comprehensive choice. Underneath the video was the dreaded "fire pit" as administators called it, a section devoted entirely to listing disturbing comments supposed to but not usually about the video. Although this feature as a whole has been hated by many, the idea of keeping it tucked under the realms of visibility has been applauded.

However, on March 31st 2010, YouTube forced a video page redesign on its users. The site's designers said it was to reduce page clutter and make the site easier to use. This was achieved by removing the original star rating system, removing profile pictures from the video page and re-encoding all videos to a new glossy grayscale format "remeniscent of better times". Several users soon noticed that, somehow, some of these changes did not make use easier. But they since have noticed that many of the changes saved money that would otherwise be spent on bandwidth, shortly before being assasinated by Google officials. This, combined with the sheer number of ads that have been appearing, leads many to suspect that the people running YouTube are just a bunch of cheapskate hacks. Despite massive protesting (and the obvious solution of getting a PayPal account to pay money for bandwidth), YouTube has been adamant in keeping the new design. 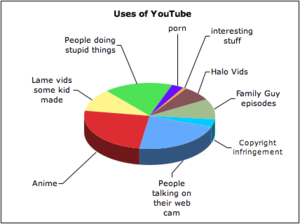 The medium of YouTube has yet to be fully realized, but early signs are promising. Since 2009, some users have begun to use YouTube in ways other than the norm, uploading vides and doing actions with social meaning.These include providing lessons on quantum physics for the general populace through video blogs, trying poorly to end war in the Middle East, teaching lessons on real political science and history, and thumping religion. Far less common but even deeper are such thoughtful acts as declaring 2012 prophecies, making fun of others to increase self confidence (booze can't always do it), aiding in police investigations, softcore pornography and posting cute videos of pets.

However, most of YouTube's users are Internet geeks with weird senses of humor and poor senses of vocals. Some of the most popular videos are ridiculous and moronic, such as a guy obsessed with seeing a double rainbow, another guy saying "Boom! ...goes the dynamite" only once, a game player who messes up his team plan, and an angry kid from Germany. The vast majority of videos are like this and, although appealing strongly to the nerd audience, turn off everyone else. Another kind of alienating video is the "fake videos of popular[citation needed] anime shows". At first it was rather obvious these videos were fakes since a picture of a big purple surfing dinosaur while jamming out to the song "Everytime We Touch" has nothing to do with kids playing ninja. Unluckily, despite the obviousness of being fake videos, people continue to watch and comment on these videos, giving them "honors". The only thing more pathetic than waiting every week to watch a new episode of a predictable cartoon is tricking losers and getting their hopes up.