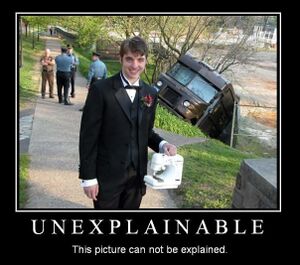 Although this photograph does not fully capture the mysteriousness of life, it is nonetheless very mysterious.

“Life is never fair, and perhaps it is a good thing for most of us that it is not.”

For those without comedic tastes, the so-called experts at Wikipedia have an article about Life.

Life is a terminal sexually transmitted disease, orignating either from God or your mom. This STD is, however, inflicted on the offspring of the intercourse, rather than on the participants. Offspring, themselves, are also STD's, leading to the unique situation of STDs that have STDs. The main symptoms of this disease consist of having to deal with temper tantrums, going to work, settling down, mental exasperation, and in most females, a large cyst in their stomach that lasts nine months.

Although life is not treatable, it can be cured. The best way to cure someone of life is to cause death. Thus, in cases where a diagnosis of life is likely, it is best to ensure that death is administered as soon as possible: one common strategy is to simply throw the baby out of a window. However, some believe this is a temporary and ineffective solution, as the baby will only be reincarnated into a more pissed-off form.

The symptoms of life include breathing, eating, and defecating. It is the only known STD with a 100% fatality rate.

Therefore, life turns out to be a big waste of time. People afflicted from this disease end up spending all of their time just... living, and doing nothing else much. Parasites, illegal immigrants, poor and jobless people are the ones usually found having a "life" -or too much life- than healthy humans should, and going as far as enjoying it. This is why our superior global leaders have an ongoing policy to get rid... errr we mean to CURE them.

When life hands you lemons

It goes without saying that if life hands you lemons, you should make lemonade. However. Sometimes life hands you a bunch of shit. What then? The creative options are somewhat limited in this case. You might want to consider planting a garden and putting the shit in the garden, but only if the shit is of livestock origins. Since this is usually impossible to determine, and because cow manure is frequently infested with E. Coli, surrounding yourself with fans to blow the shit back to it's source is a far more preferable option, especially in the workplace.

Life sucks and then you die

This negative approach is normally reserved for death row inmates, the terminally ill, and Americans, but doesn't make it any less true. Research has proven that life sucks 62.3 % of the time for the average human being. 30 % of the time is spent dreading the sucking of the other 7.7 % of the time and the remainder is blissfully spent sleeping and therefore doesn't count. So technically the 62.3% of your waking hours spent sucking are when you're at work and/or job hunting and the 5 or 6 hours when you get home .

Life is also highly mysterious. Every major culture has attempted to unravel the mysteries of life, and they've all sucked at it. However, the predominant theories are:

These, of course, are only the best theories. There are many others which are not so compelling.

How to get one

While life happens across a wide variety of plant and animal specimens, the basic process of life can be broken down into a series of steps common to all:

Food and water are required for the sustenance of life. Ironically, much of the world's food is derived from the death of something else. This is known as "the circle of life." Put simply, first, living things go into your mouth, and then you go into the mouth of living things. This creates a circle.

Eating can be done in a variety of ways: absorbing sunlight, gathering nutrients from liquids, consuming the pulpy bits of other lifeforms, and sucking the sweet sweet blood of your overworld cousins are just a few of the more common methods. Some cultures even indulge in consuming the undeveloped fetuses (or feti) of smaller animals, such as chickens, ostriches (or ostrigi), or fish. Another popular method of eating is convincing a cow or goat that your hands are its offspring, and drinking the stuff that spooges out of their breasts.

A requisite by-product of eating is waste removal, which is known in the animal kingdom as "pooping." Garbage in, garbage out.

Sleep is also required for life to continue. But try not to do it too much, or you'll never get to the end of this article.

Closely related to eating and sleeping, sex takes place in a bed and involves a lot of chewing. After becoming infected with life, a female will start vomiting in her own hair and urinating uncontrollably. Ah, the miracle of life.

Recent research suggests that nobody can remember the beginning of their own life. This has led to the conclusion that birth is an illusion, and that we are all trapped in a false reality from which there is no escape. Kind of like the Matrix. But kind of not.

Life can sometimes become a bit difficult. In some cases, it may become necessary to use cheat codes to get through obstacles. Yes, it is true that people may laugh at you and call you a loser, but its best to remember that since you're not doing it on a video game, that automatically means you're not a loser. It should also be noted that with the assistance of somewhat 'seedy' cheat codes, glitches and bugs may affect the server in which one is living. It is suggested then, that before you attempt to cheat, save your current progress.