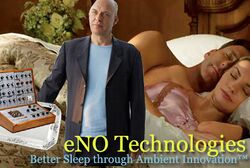 You are most likely viewing this page because, having spent all day at your computer, and are now having trouble falling asleep. Sleep was designed by the creators of Uncyclopedia to keep you from making continuous edits of pages.

Sleep is a common nutrient deficiency in the caffeine stream caused by an over-abundance of blood. This condition occurs to over 99% of people within their lifetimes - apart from, of course, Edward Cullen - and in most cases the condition, when apparently out of the system, returns at a later date. Sleep has several common symptoms. The afflicted enters a coma-like state in which conscious motor functions cease, brain activity is reduced, stupidity increases, and the afflicted is entirely unaware of the outside world. This coma can last from a few minutes to several days. Sleep symptoms occur most frequently during regularly scheduled television showings of Fear Factor. Often, sleep sufferers (synonym: "zombies") will report hallucinatory experiences, such as: "cavemen playing pinball". If a friend is suffering from any one of the symptoms it is advisable to inject no less than 15lbs of caffeine directly into their veins. This should combat the effects of Sleep. If this does not work, try any kind of physical contact, e.g Shaking, battering with a large object, or removing the limbs. If sleep persists immediately contact a morgue, as they are likely already dead.

Sleep was originally welcomed into our society. With days lasting as long as they do, people simply didn't want to be hard at work constantly. It seemed like such a wonderful way to procrastinate, but now the effects are truly known. It causes hallucinations, amnesia and the inability to deal with the waking world. While people sleep, they experience things called "dreams" in which their brains reflect on what has happened during their life and tries to teach the dreamer. Many even experience terrors in their dreams, and don't realize they're not in the real world and believe the horrors. More and more people are sleeping. Young children are those most affected by sleep. Some sleep for more than 18 hours in a single day. Many believe that this is caused by their parents sleep habits compounded upon the young. All in all sleep is a horrible affliction which has even spread to the classrooms. The caffeine companies trying to sell their product as a way to avoid sleep for those addicted need to be stopped. Stay awake.

Sleep Is For The Weak[edit]

Insomniac Michael Keaton Batman here agrees, the only thing he sees in his dreams when he closes his baggy eyes for a couple minutes of micro burst sleep is just grisly crime scenes anyways, caffeine and sugar are the detective's deadliest weapons.

The ONLY exception to this is cats. Cats sleep 10 hours a day or more. Their POWER!!! is not damaged by sleep, because cats are just that awesome like awesome. Cats RULE over the rest of the animal kingdom. Typically it is also considered morally imperative, or in the very least civic responsible, to improve on their drooling faces with the nearest Sharpie. Popular choices--in order of statistical frequency--are: rimmed glasses, moustaches (preferably Hitler-esque or French), and poetry (preferably drunken). If the discoverer also happens to be drunk, equally ugly, or British, waking by urination appears to be acceptable. A secret message may lead you to a spot where no one sleeps.

The Cure For Sleep[edit]

In addition to the caffeine injection and physical actions mentioned above, there are several other means of combating sleep symptoms if they are available. Drugs such as methamphetamines, World of Warcraft, mexican dancing, and opiates can be used to suppress symptoms. Strangely, there is an occasional positive externality associated with cosmetic surgery that cures the problem entirely. Sleepers can also be woken up by placing one of their hands in warm fluid; a common waking technique used in Britain involves the use of urine.

Another more natural way of curing sleep is simply staying awake. Doctors advise against this because they do not believe in the added benefits of ultimate enlightenment. During the self-treatment of sleep, You go through certain mental phases which to begin with remind of reality but luckily don't stay that way. After seven days (28 if you are a rat), you should reach ultimate enlightenment.