Before The Fast and The Furious, cars were slow and the scenery never got all blurry. Then Din "the Actor" Viesel discovered NOS, and it was good. When equipped with big bottles of Nitrous cars could travel faster than the speed of sound and were finally able to overtake Superman. 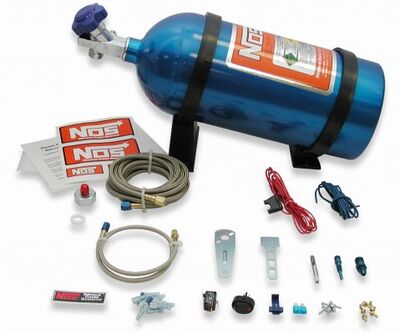 NOS: The fastest and cheapest way to get the gyals. Oh my god free stickers!!!

Nitrous was virtually unknown before the release of the German documentary about Hitler, "Der Faust Unt Der Fuhrernicht". The film shows Hitler installing NOS on his Mercedes Benz 540K, eventually leading to his brainchild, the Autobahn. The plot thickens when he cannot figure out how to keep his floorpans from dropping out. After removing his passenger seat, a tickertape device connected to a typewriter was installed in its place, with LEDs encircling the glass dome. The SS was ensured that this was not for aesthetic reasons, but to warn him of manifold failure after several bursts of nitrous through the supercharged V8. His impatience led him to scream, "Mein bodenwannen fällt heraus! SCHEISSE! Die bodenwannen sind einer nuisance-wannen...." Germans everywhere saw the film and demanded a "People's Car with NOS", which Hitler obliged and took credit for. Soon after, NOS spread through Europe, causing blurred vision, vomiting and violent diarrhea. This however was the creation of an economic miracle; Jobs were available to all whom wanted to cruise the autobahns in flatbed trucks gathering scattered floorpans, burned out shells of former vehicles, and scraping the remains of drivers off of the road surfaces.

That film was followed by another, which was the same film, but in a different location.

That film was followed by one that was exactly like the original two films, except that it took place in Tokyo. Oddly, Tokyo looks just like L.A..

That film was followed by another, which again was the same film, but by different people, and with motorcycles. Logically, it was called Torque, a characteristic for which which crotch rockets are known. Most crotch rockets are rotary powered turbo diesel engines with a top RPM of 4,000.

Torque was followed by another, which again was the same film, but by different people, called Biker Boyz, because it had "boyz" who were "bikerz", probably. It would've been best if they'd had a dictionary instead.

Neither of the motorcycle movies had nitrous, but then again none of them were any good, so at least they have that in common (the bit about being bad, not the bit about NOS).

Taken together, all of these films teach you everything you need to know about nitrous, especially films three and four, which didn't mention it even once.

There may have also been another film in there somewhere. It had cars, probably. Maybe scooters. The scooters used the same size NOS tanks as passenger vehicles, so seats were mounted to the tanks for comfort.

The Science Behind NOS, Made Simple[edit]

To law abiding citizens these are bald tires; to you, super dorifto downhill master, they are "slicks"

Scientifically, Nitrous Oxide contains stuff that makes your engine more betterful. The more bottles of nitrous your car has the faster it will be.

You will also need-

Be careful your polished aluminum floorboards do not fall out and be careful not to, as Din Viesel said, "burn up your piston rings.". Don't worry about burning up your pistons, dropping a valve at 10,000 rpm, cross threading your iridium plugs, laying an ignition wire against your flakey/crusty headers, or pushing a connecting rod out the side of your block as the piston rings are the only thing that can burn up. ( throw the canisters under the hood they'll sort themselves out)

How to avoid burning up your piston rings is, sadly, not explained in any of the films - this means no one, not even Hollywood, knows how to avoid this. Luckily, as in the first film, rebuilding an engine can be completed in one simple montage (don't forget the background music!)...and if you get a crappy and slow non-turbo MK IV Supra don't forget to act awed and surprised when you pop the hood and find a 2JZGE engine. Also the second film shows that dirty but mint condition R34 Skyline GTR's can be found cheap in the back of shitty used car lots.

Be careful of the Chinese mafia, they have little patience when dealing with Gaijin mechanics that take too long to put Nissan engines into their Acuras, and will subsequently argue over what weight of oil to fill your mouth with. Also, don't make the mistake of sleeping with their sisters; they will avenge this transgression by flagging you down the parking lot of a Golden Buffet, attempt a series of witty comments, and then unload several hundred rounds of ammo into your car.

Don't worry about pesky trivialities like Air-Fuel ratios or "building up" the engine, as NOS will massively increase horsepower on a completely stock engine and never, ever causes your engine to violently disintegerate - provided, of course, that you follow the teachings of Din Viesel exactly.

Drifting, and with it, wheeee! im going fast on my xbox, originated in Michigan, a state known for its mild winters and miles of smooth asphalt.

Enormous additional power increases are guaranteed if you add a K&N filter, coffee can sized exhaust tip (Folgers will do, make sure to paint "Type R" on the side of it), 20" spinning wheels with 8 inch spacers, (This will improve the handling and increase the longevity of your balljoints and wheel bearings) a body kit with a cool name like "Combat" or "Buddy Club" (make sure it comes with a wing that rests no less than three feet off the trunklid), dropped springs (so every time your wheel is anywhere off center you'll hear a cool scraping sound), and LED windshield squirters.

Avoid granny shifting and make sure to double clutch as if you were shifting a non-synchro transmission out of a semi from 1954. Double clutching is used by speed-racers when downshifting; foot off the gas, mash clutch, put tranny in neutral, let off clutch, mash clutch, blip the gas, put tranny one gear lower than before, punch the NOS button and mash the accelerator. Sounds easy, doesn't it? Remember, if you do it right the transmission will make cool grinding sounds. Grinding adds power through weight reduction; the less material on the gear or synchro, the faster it spins! 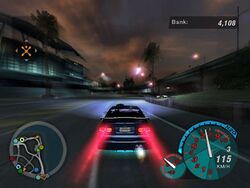 After pressing the Nitrous botton installed in your super-car (preferably Japanese, but German steel can be substituted in a pinch), the world around you will blur, accurately portrayed in the computer simulation "Need for Speed Underground" (a sim that's so realistic you can use it to learn how to "drift", (A phenomenon created by setting the front toe angles in separate directions) then use your skills at high speed on real city streets! This is in direct contrast to arcadey games like "Gran Turismo" or racing on sanctioned, safe racetracks - both of which will fail to improve your "skilz", yo).

Be sure to purge your lines at every available opportunity, to ensure that the system is armed with a fresh batch of gas (not to impress passersby and other road users). Do not at any stage take note of bottle pressure or temperature, as only pussies and nerds keep track of things. Time spent to check bottle pressure is better spent polishing the diamond plate floorpan. Chicks dig shiny floors.

Another important aspect of using Nitrous is the super-heated fire that blazes out of the back of your tailpipe. Fire coming out of the tailpipe is always a good thing and never indicates that your engine is running really, really rich or that the catalytic converter has mere minutes to live. It could also mean your car is on fire, Which also creates power and looks cool, but that only happens if you don't use enough nitrous. Don't worry. To be safe, make sure to replace the cat with a "test pipe", and don't switch it back. That black smoke coming out of the chromed 6" tip is the colour of horsepower!

Without these features, Nitrous would never attain the speeds that it claims on the label printed on the bottle, next to the Expiration date and "for off-road use only". Make sure to leave the nitrous connected when you go to your local emissions station for a smog test. This will cause the exhaust to shoot ubercool fireballs into their diagnostics gear, lowering your emissions and guaranteeing that your car will pass with flying colors. 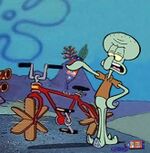 The "NOS Virus" comes both in a digital, and liquid form.

The "NOS Virus" has recently been identified as the single most crippling attack to Skynet system to date. Little is known of the virus origin, but in 2009 the hacker legend "sti2gsxr" single-handedly hacked a website critically linked to the main internet hub, causing blackouts throughout central Asia and parts of Wisconsin. The site gixxer.com was first introduced to the NOS virus at 3:00pm on 05/19/2009... that's 19/05/2009 to you britts.

The virus is designed to distract global citizens from their daily activities, therefore simply stopping all productivity and development on a global scale.

At this time, there is no known cure for stopping this internet virus, and it has seemed to take on a life of its own. It has been estimated by webmasters that by the end of 2009, the virus will take over all web pages search engines, and direct all internet traffic to the gixxer.com website. From here, it has been established that hacker legend "sti2gsxr" will simply turn off the internet. When asked why he would do such a thing... he was cited to say "Omfg noobs. nobody helpz me got my bike to run!" then babbled something off topic about "how could more octane hurt?"