From Uncyclopedia, the content-free encyclopedia
(Redirected from Playstation)
Jump to navigation Jump to search

The PlayStation was the result of Sony's coup to destroy Nintendo. The competing system that was designed to thwart Sony's coup was the Nintendo 64, a system that gave candy, nightmares and was set to destroy the years of planning that Sony had put into the project. Sony however, was prepared to offer it's won cast of memorable characters. After seeing weakness in Nintendo's new system, they concluded that the PlayStation was ready to knock out the evil Nintendo Corporation. But first they had to make a sandwich.

Sony president Miruna Shartz entered a business deal with famed game developer Nintendo. The deal was that, if Sony provided Nintendo with exclusive use of Sony's trademark media drives, then they would develop a game console, and Sony would get their names listed in white, size 22 font on the console's white instruction manual. Sony saw this as a great opportunity for business, so they accepted. However, after failing to meet the requirements of $69K payment, Nintendo ditched Sony.

This enraged Miruna, and somehow further ignited his affection for local coworker Ken Johnson and Josh Mathews. He appointed Ken to work on a new system, one that would make Nintendo go the way of the dinosaur. When Ken accepted the position, he was placed in a clear, glass office directly opposite Norio's, which was then renovated to contain a one-way, see-through wall (Sony was very smart with their technology). Ken would work tirelessly all day, creating a console that would put Sony on the market. Unbeknownst to Ken, Norio would watch him work his long hours and do unspeakable things to himself as he did so. However, he was constantly ridiculed and, as such, filed for resignation under the terms: "they bullied and harassed me ):".

One night working late at the office, the prophet Norio received a vision and was taught the four letter name of god, X, O, Triangle and Square, chiseling them on the plastic controllers of law. This actually did simplify gaming for many, and is rumored to be half the success of the Playstation. Later on, They invented the "Analogue Stick", and released a new controller for the system. This meant that games could be controlled using knobs, a better alternative to the Directional Pad, because they had the convenience of unreliability and stiffness, so that meant that the inconveniences of the reliability and simplicity of the D-pad could be replaced. Of course, the President suggested this idea. 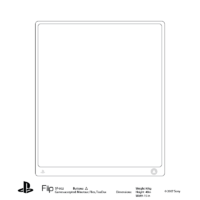 Design plans for the PS Fiip.

When the success of the PlayStation was noticed, G-d was pleased demanded a second system be made. However, the technology was still too crap to make it truly a PlayStation 2, though it was slightly better then a PlayStation 1, so they called it a "PlayStation XXX". Little did they know, that PSX would actually replace the acronym of PSSSSSS, and forever confuse fans of the system. The PSX slated nothing new, besides a slightly higher game compatibility rate of 1.5/304. It was another major selling point, garnishing 51 units sold in Japan, and 2 everywhere else. 53 Units was the highest benchmark possible for a company, and so Norio's dream of destroying the armies of Nintendo was successful.

In an attempt for Sony to recover after the great console famine of '05 was caused by a swarm of locusts, Sony released a handheld console named Fiip. The handheld could play a variety of games from the Minotaur, Flies and TixaDux platforms. However as the console only had one button, none of these games could be played on the handheld, and as a result only one console was sold.