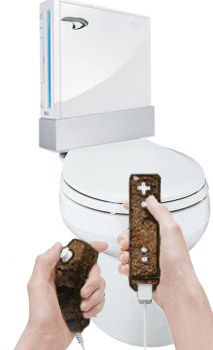 The Puu is a 7th generation games console from Untendo. Puu is Untendo's number 2, number 1 being the Wii. The Puu is the sister to the Wii, and was scheduled for release around November 2006. New Zealand and Europe "had their launch dates pushed back slightly", and have had to wait much longer to get their hands on one. Puu has finally been released, much to everyone's relief, and leaving many satisfied.

On the whole, the Puu has left its mark. The remaining Puus are all but wiped out and this leaves a significant impression on paper. It has hit its target with force and made a quite a splash, making it a slippery endeavour for those trying to leave it high and dry.

When running, Puu gives a highly immersive experience, and is often so overwhelming that workers call in sick.

While technically the Puu is a piece of crap, Nintendo places emphasis on content and not necessarily visual aspects. Sony's Ken Kutaragi, upon further examination took a jab at it saying: "That thing? Look at it! You've gotta be shitting me!"

Puu rivals have been conducting smear campaigns showing the writing on the wall. This, however, has only spread awareness and Untendo has been cleaning up ever since.

The name of the Puu has been welcomed by all, in stark contrast to the controversy surrounding the naming of the Wii. Inspired by the Wii name, since they discovered that it means urine, Untendo publicly announced that they will make some Puu and sell it. However, the entire marketing team became intoxicated at an office party, and for shits and giggles, they named it Puu. To make up for this brief moment of silliness, there is only one Untendo branding of any kind on Puu.

The Puu is manufactured in a variety of locations, including in-house. It is not uncommon for people to queue outside, bursting to enter such places, although vandalism and graffiti mar the tour of the facilities accessible to the general public.

The creation method involves processed materials being excreted from the bowels of the system into production lines, and the Puus are sent away, never to return.

Supply problems have caused immense strain on outlets, with pressure building and causing uneasiness. In some areas, the raw components of Puu are themselves in short supply. Delays in Puu production are generally only short and end with large-scale dumping.

The sound of Puu is unique, but is considered by critics to be of low quality, and the sounds emitted unpleasant, particularly at higher volumes.

Puu enthusiasts have been straining to squeeze out every last bit. One of the more popular modifications is cooling the Puu for solid performance.

Many people have been unable to control their Puu, letting it slip out, causing harm and embarrassment. Untendo has offered a solution to individuals that have paid, and is available from most pharmacies. The solution is generally effective and extensive research has backed up these results. Some of those afflicted have found the aforementioned solution hard to swallow, and have brought it up, consequently starting an unclassy action lawsuit. The company has dismissed these claims as "completely without merit".

New excremental firmware is released from time to time. Certain firmware and its effects have on occasion caused many to shit a brick.

Untendo has also warned of light sensitivity. The company recommends not leaving the Puu in direct sunlight, citing its white appearance. Nintendo also sued Untendo for the console, since it looks the same and the name is closely identical to Nintendo's Wii.

"I was playing with Puu even before it came out!" ~ Oscar Wilde on Puu

"Mine crapped out on me." ~ Pope Benedict XVI on Puu

"The most delicious gaming experience on the market. Best served cold!" ~ Oprah Winfrey on Puu

"My Puu runs so smoothly! It doesn't feel chunky like those other ones!" ~ Satisfied customer on his personal experience with Puu

"I was expecting this Number 2!" ~ Nostradamus on Puu

"It's unstoppable!" ~ UnNews on Puu