From Uncyclopedia, the content-free encyclopedia
Jump to navigation Jump to search
Stupid warning: Something stupid this way cometh.
This article is stupid. You can help Uncyclopedia by whacking it upside the head with a clue-by-four. 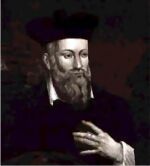 One of Nostradamus's more accurate predictions was the exact form of the "Westside" gesture.

For those without comedic tastes, the so-called experts at Wikipedia think they have an article about Nostradamus.

Michel de Nostredame (14 December or 21 December 1503 – 2 July 1566), was a seer and the author of a famous prophetic book that predicted, with stunning accuracy that, at this very hour, you would read this.

Michel de Nostredame, known as Nostradamus to his friends and family, was the third of five children born to his loving mother, Amelia de Rampti, and heinous father, Damien Nostedame, who worked as a hunchbacked assistant to a mad scientist. Nostradamus grew up in Nottingham, England.

In his youth Nostradamus was very gullible and did anything any of his friends told him to do. Once, on a dare, he called up the Czar of Russia and said: "go to hell you fucking commie bastard," then hung up. The call was traced and he was arrested and thrown into a Russian supermax prison, where he survived on a diet of water and psychedelic mushrooms. By the time Nostradamus' sentence was up he had become convinced that he was a prophet.

When he returned home, his entire family had died in the bubonic plague, leaving him destitute. Seeking to gain fame by his ability to "see into the future", Nostradamus began writing self-published books which he sold on street corners. In his writings he foretold such future events as the rise and fall of Adolf Hitler, the death of JFK, the death of Dale Earnhardt, every death of Kenny, the Falklands War, the invention of Boggle, and the Milli Vanilli lip-synching scandal. All of these predictions eventually found their way into his memoirs, published by Random House in 1554.

Accused of witchcraft by Pope Walter IX, Nostradamus narrowly escaped several attempts on his life by the pope. These assassination attempts culminated in 1562, when in the space of a single week Nostradamus was attacked twice by knife-wielding nuns, fed an exploding communion wafer, and then nearly crushed when a gargoyle was dropped onto him from Notre Dame cathedral. Convinced that the Catholic church would never stop pestering him as long as Walter was calling the shots, Nostradamus secretly traveled to Rome where he formulated a plan to assassinate the pope.

Nostradamus knew that every Wednesday the pope drove into town to buy incense, and this would be Nostradamus' opportunity. His plan was to carjack the popemobile, tie the pope to the driver's seat, place a cinderblock on the gas pedal and send the vehicle filled with explosives hurtling at full speed right into the college of cardinals, bringing a fiery death to all. Nostradamus implemented his plan on November 2, 1562, but the pope survived because the popemobile's top speed was insufficient for the task. A disappointed Nostradamus blamed the failure on his confusion between kilometers per hour and miles per hour. The pope's close call led directly to the development of airbags as a standard feature in papal transport.

Some of his more notable predictions of future events are summarised in the table below:

The prophesies are collected in ten volumes and one Best Of collection, available wherever mood rings and Volkswagen paraphernalia are sold. There are also whispers that everyone involved in his prophecies have just played along so as he wouldn't look silly and predict something worse for them which they would then have to act out.

Nostradamus wrote his prophecies in quatrains, using iambic tetracycline. Sometimes he wrote them in the shower instead of quatrains, but the ink ran and most of these "all wet" predictions have been lost.

Less Famous but yet Debated Predictions

"She shall have a round face. She will have clean feet, but very dirty, dirty, filthy socks. I will not pay more than five Florins this time."

"This rubberband hurts. You will see."

"I can't feel my legs! This will not end well!"

"The goddamn bottom is covered in yeast, this ale is ruined, but yet I will not stop drinking!"

"The optimal niche market for wholesalers in Germany will be transparent catheters; but it requires rash investments and unloading, since oversupply will occur rapidly despite the perverted nature of the fat bastards!"

"Shoot me in the face with a BB gun. I'll duck before it hits me in the eye!" (he was wrong)

What about the 39 steps? Why doesn't he tell us about them? Also, Joe the Plumber, he missed that by a country mile.

Machines that can predict the future: