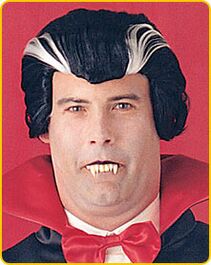 Blackula was a notorious black vampire who lived during the 1500's and was resurrected in 1970s Los Angeles he was a famed artist doctor and had several PHD's showing that you didn't have to be white to be an intelligent thought provoking and kind man... and then he was exposed to vampirism which made him the absolute worst

Blackula was originally an African prince, who, even at the time of his conversion to Scientology, was very well educated in English and dressed as an aristocrat. He and his wife were meeting with a certain Count Dracula, viceroy of the city-state of Pennsylvania, to discuss the Count's burgeoning undead slave trade with some African nations. Blackula (at the time known as Lincoln "Cadillac" Mamuwalde) took umbrage to the Count's slave dealings and politely asked the viceroy to cease. The Count became quite enraged, calling Lincoln several racial epithets and admitting to lusting after "that hot mochachina of a wife you have there (named "Pa-jama Luva Oran-jello").

Standing to leave and threatening the Count with an urban riot not seen since Watts, Lincoln asked: "You crazy, honky cracka? You got the jungle fever?"

The Count, baring his fangs, easily overcame Lincoln and his wife. He fatally bit Pa-jama, raped her corpse, and doomed Lincoln to an undead existence. Lincoln exclaimed "Ain't this a bitch!" and was laid to rest in a coffin until American International Pictures resurrected him in the 1970s.

Blackula, after being resurrected, converted back to the Uncle Ben's Church of Latter Day Saints. He went on a rampage across Los Angeles, which reminded many people of the Tom Cruise-Katie Holmes zombie spree. Blackula then decided, mistakenly, that a woman he met was the reincarnation of his long dead wife. Seventies' blaxploitation actresses, from LaWanda Page to Pam Grier, fled the city in fear believing that an African vampire would only sound the death knell for black cinema. They were right. The woman Blackula believed to be his wife could only say, "Nigga, get a real job, start brushin' yo' teef, put on some deodorant, and get the hell outta my apartment. You been here two weeks too long! Shit!"

Brokenhearted and broke as a joke, Blackula wandered the streets as a bucket drummer until he was recruited to play backup in George Clinton's band, Parliament. He went on to a steady musical career, until he tried to bite Sly Stone. Stone, being coked to the 'fro, survived, while Blackula overdosed and died from Sly's blood, which at the time was 97% cocaine. He now lives on only in the memories of director Quentin Tarantino, actor Samuel L. Jackson, and relatives Blade, Blackenstein, and the Blunchblack of Blotre Blame. 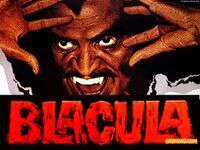 He sucked at spelling.

Whereas Dracula has attributed to him some rather well known phrases and sayings, Blackula also has been known to say the same things, but in his own hip mannerisms. For example:

Dracula: Ahh, listen to them, the children of the night! What music they make!
Blackula: You hear that, breeze? Niggas down the street be sounding like the Brothers Johnson!

Dracula: I want to suck your blood.
Blackula: Gonna grow you a new mouth, bitch!

Dracula: To die, to be really dead, that must be glorious!
Blackula: Dead? Dead? Shit, nigga. That's better than momma's greens!

Dracula: It reminds me of the broken battlements of my own castle in Transylvania.
Blackula: This shit be lookin' like Watts in '65.

Dracula: There are far worse things awaiting man than death.
Blackula: Nigga can't be sayin' that death is all bad. Shit is worse than that in Compton.

Dracula: I am Dracula!
Blackula: I'm Blackula, BITCH! FUCK YOU!

Dracula: Welcome to my lair.
Blackula:Nigga, this my crib.