Another brave soul lost to the merciless hunger of the Bermuda Triangle.

“Did you mean occupied Palestine?...”

~ Humphrey Bogart on The Bermuda Triangle

The Bermuda Triangle is a mysterious area of land that exhibits the strange property of forming a shape called a "triangle" when the three points it consists of are connected. Green, and not as big as you'd think, the Bermuda Triangle is responsible for sinking many rowing boats, cruise ships, and other miscellaneous water craft in the last decade. The Bermuda Triangle is now famous for making the Lost plane break. It was destroyed spontaneously by Jimi Hendrix using his neon ultraversal guitar. The area is now subject to a higher than average amount of Hendrixosity. Therefore, modern sailors still avoid the area as they might be hit by a lethal dose.

For those without comedic tastes, the so-called experts at Wikipedia have an article about Bermuda Triangle.

The Bermuda Triangle is a square like figure that swallows people while playing depressing music like "Beat It" by Michael Jackson. If you are ever being eaten remember to do exactly this. Scream the alphabet backwards while plugging your nose with your eyes closed. And remember if you eat a banana while doing exactly as listed above you will die. It is also said doing that will make you sing like Michael Jordan and shoot like Michael Jackson. 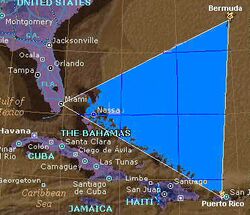 Look at those sharp edges.

The area between Bermuda, Miami, the Bahamas, and that other place that no one has ever heard of. The Death Star, that was it. Also known to be spotted in the Arctic Ocean and New Michigan's Great Lakes, the Bermuda Triangle can also be seen at most McFly concerts, explaining the total lack of people there. Also, in 1968 it was spotted in the "Zuiderzee", a large hole in the earth filled with water, situated in the Netherlands. It is also fairly often spotten in Loch Ness, therefore, most people confuse it with the Loch Ness monster. Mostly Asian tourists are confused when they make a photo of the monster, and then zoom in on it to find a horrific triangle instead of a dinosaur-like creature. However, scientists speculate that the Bermuda Triangle actually descends from the Loch Ness species, but no genetic evidence has been found so far.

The Bermuda Triangle eats just about anything that floats: ducks, very small rocks, rowing boats, surfers, cigarette stubs, camels, crashed UFO's, whatever but his favotrite food is Rangas who like to babysit people. When it spots prey, it shaves its beard and uses telekinetic 1337 skills to create an expanding hyper magnetic field, jamming all communication (This tactic would later on be used in World War MMXIV, when the USA accidentally bombed their own nuclear facilities). After the ship has lost communcation with the outer world, it emerges from the water and issues its evil laugh. It then grabs the prey in its grubby hands and eats it, making it disappear from the radar. It once ate Kayli Palmer. Once a penguin managed to escape, but it had teeth marks all over it. Triangular teeth marks..

This is not a creature but natural phenomena, but myths of its selfless acts of ridding the oceans of evil have circulated... Some idiots thought it to be Mormon, but Mormons are a gracious loving group of people indigenous to the western USA. It is believed that the Bermuda Triangle is really a valve that allows natural gas to escape occasionally creating the problems that have been recorded through the ages. It actually has nothing to do with religion.

There is no known defense against the Bermuda Triangle. In fact, everyone that's spotted it got eaten. However, if "no known defense" fails, you could always try adopting the fetal position and crying like a small child. This is unlikely to help, but will provide a more entertaining meal for Mr. Triangle. 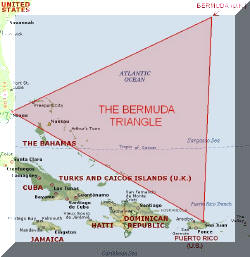 Every Sunday, the Bermuda Triangle turns on the TV to enjoy President Chávez's Aló Presidente ("Hello President" in English). During the five-hour show, the Bermuda Triangle becomes a kind-hearted creature to the rowboats that pass near him. However, he hijacks U.S. tourist boats and forces the tourists to watch the whole show with him in his underwater TV room.

The Real Cause behind the Bermuda Triangle[edit]

Apparently, as many jedi claim, God created the Bermuda Triangle when he was in maths class and tried to draw a square but failed epically. In 2007, a video filmed by a sailor lost in the Bermuda Triangle was found on an abandoned ship within the triangle. During the video, the ship entered a mysterious fog bank. The ship's engines failed, and the ghosts of dead Teletubbies floated out of the fog and brutally murdered the entire crew with axes, knives, fishing spears and giant turtle cannons. The ghostly Teletubbies gathered the bodies into a pile and burned them to ashes as they joined hands and floated in circles around the fire. Scientists believe that these were the ghosts of a group of Teletubbies killed in the late 1600s, when pirates raided their annual "Tubby Custard Festival" on Teletubby Island, the center of the Bermuda Triangle.

Since singer Barry Manilow confessed the Bermuda Triangle was one of his favorite holiday hot sports, tourism has soared. 100,000 visit per day, and suprisingly around half make it back home. Manilow could not be found for further comment, however.