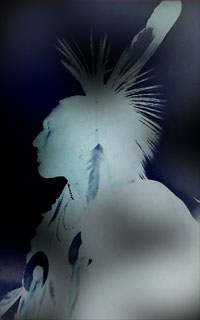 An Indian Ghost Reservation is a tract of land set aside by the government for the inhabitation of Indian Ghosts. This land was set aside after a unanimous Supreme Court ruling in the landmark case of Chief Running Deer V. Grames, in favor of Grames and the ghosts of White Settlers.

The ruling settled an argument between Jim Grames and the ghost of Chief Running Deer. Grames, who had dug up and moved a sacred Indian burial ground so that he could build his home on the land, argued that upon his death the home and the land surrounding it rightly belonged to him, and that his ghost would have sole ownership. Chief Running Deer's argument was very simply that he was there first. The court ruled in favor of Mr. Grames because he, and therefore his ghost, had legal ownership of the property. Indians, and their ghosts, argued that it is impossible to own the land and that it belongs to all creatures' ghosts. Then the Supreme court laughed and laughed and laughed.

This ruling caused the eviction of thousands of Indian Ghosts from their resting places, pushed out by the White Ghosts who all had legal ownership. The government, knowing it needed to relocate the Indian ghosts, set aside tracts of land where the Indian Ghosts could reside. The Indian ghosts were herded onto trailers, then pulled by tractors to their new homes. Children watching as the procession moved down their city streets stood alongside and watched. As a plea for mercy, the Indian ghosts would throw the children small candies and trinkets. Everyone agreed this was lots of fun and they started doing it annually.

However, in the years to come, the land set aside for the Indian ghosts would grow increasingly small as White Ghosts moved onto the land, claiming it as their own.

These days, Indian Ghosts Reservations are notable only for the fact that they're the only place where Indian ghosts can hunt Ghost Buffalo (and other extinct animals) and run Ghost Casinos.

Ghost Dancing is also very popular at these locations.