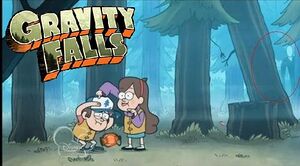 Just north of normal, west of weird, east of erie, and south of slender.

Gravity Falls is an American animated series created by Alex Hirsch. It is hailed as the greatest cartoon ever to air on Disney, despite its frequent use of hidden messages and ability to give small children nightmares in the dark.

For those without comedic tastes, the so-called experts at Wikipedia have an article about Gravity Falls.

The series takes place in Gravity Falls, a town situated in the middle of Oregon. It depicts the misadventures of two twin siblings whose summer plans were trashed by their parents, and now must cope with living in a museum filled with dead animals being run by their creepy old uncle.

The town itself is apparently haunted by ghosts, monsters, strange individuals, and other supernatural elements (much like Scooby Doo, minus the talking dog and lunatics running around in cheap costumes). Yet the inhabitants are blissfully unaware of any of it and the twins are the only few people who realize the danger their parents have left them in. Luckily, they are aided with a book of secrets which mentions facts about the paranormal phenomena of Gravity Falls.

At the end credits of every episode, a message is shown in cryptogram format. Usually it is something random, or a sort of innuendo for the adults to laugh at while the younger viewers remain gluing their eyes to the TV screen.

The main characters of Gravity Falls about to be consumed by a mutated guinea pig.

Gravity Falls currently receives almost universal acclaim, which is a big surprise considering what the Disney Channel has come to these days. Not only do critics like it, but it has been called one of the few modern day cartoons that won't rot your children's brain cells.

Oscar Wilde describes it as a combination of Scooby Doo, Regular Show, and Adventure Time. Disney itself is proud to finally have another hit animated series on their TV spot just as their only other good cartoon was hogging up all the attention from their more inferior programming.