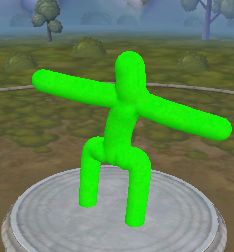 The wonders of evolution. (If only WoW had something to that effect.)

Spore is a video game produced by international mega-bastards Electronic Arts. It is the indirect sequel to 'The Big Bang' which was originally produced by Christianity Inc. and has since been copied and changed by several cults. It is also the basis for modern scientology. It was launched at the low price of $49.99, and takes approximately 5 hours to complete, giving around 6 minutes per dollar, which is slightly less than the average New York whore. It is also well known as a genetic engineering tool in the Chinese 'Panda Breeding for food purposes' project.

Hello, proud new owner of the greatest phenomenon to hit the computer. If you are reading this, then you have just purchased SPORE for the magnificently low price of $49.99. Spore is, without exaggeration, the greatest game to ever come out on any platform, hand-held, or computer operating system in history! Unfortunately for you, this is only the default Spore Owner's Manual, and only gives a brief overview of the greatest game that was ever released. If you want to get the in-depth Spore Owner's Manual, please call our hot-line, or upgrade online to the GALACTIC EDITION! The Galactic edition of Spore contains many, MANY more features (including the 100 or so pages missing from this guide ($10 per page) ), as well as the actual game itself. If you want to purchase the Galactic edition, please call or go online and opt to buy it for an easy payment of $129.99!

Getting to know Your Spore (Overview of life)[edit]

Spore is set up so that you can progress through 5 stages of life, meeting new species, and giving EA more money as you go. Doesn't that sound like fun?! In the first stage of life, you play as a sperm cell, looking for an egg in a never ending pool of vaginal fluid, but the best part is that you never find the egg! You continually swim around for hours, eating other sperms that make you bigger, and having homosexual intercourse with other sperm cells, so that you may produce even more sperm cells.

But here is the kicker... You never were a sperm cell in an infinite pool of vaginal fluids, it turned out that it was all a dream! Once you have eaten enough sperm cells, you begin to realize that you are not awake, and then, by figuring that out, you wake up to find yourself a severely misshapen human being. From this state you can choose your path of life. Do you want to be a carnivore? No? Well how about an herbivore, or an omnivore (requires monthly payment of $29.95 to keep omnivore status)? Once you have decided, you guessed it, you get to spend another 6 hours walking around on this strange planet of your own creation, eating other animals (yes, even if you are an herbivore). The entire basis of this level is the clicking of other animals. By clicking an animal, you directly digest its soul, and once you have digested enough souls (roughly 3 cubic miles of animals tightly packed together and on top of each other), you become a very knowledgeable creature, and begin your path to civilization. 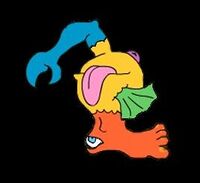 After collecting all 400 pieces your possibilities are infinite!

So you have advanced to the tribal stage of life, yet another mysterious and challenging set of events are about to come your way, but first, you must dress your naked bodies. Now that you think for yourself, you realize that your ding-a-ling is rather embarrassing, and decide to cover it up. After you design your clothing, you progress onward in the tribal stage, by once more, killing enemy tribes.

With the new and improved creature, building, and vehicle creators, you can easily enhance the fun of playing Spore by at least 6 hours, each day. Do you want your creature to have 20 eyes and 1 leg? Or maybe 1 eye and 20 legs? Well, the choice is yours. Begin your creature creating prowess with the default list of 25 body parts, and quickly find more parts for the low price of $9.99 per part, until you have all 400 parts! The same goes for all of the other technologically advanced creators in the game. Want to make a trans-galactic spaceship? Go right ahead! All we ask is the small sum of $9.99 per part so that all of your dreams may come to fruition (per part).

And it doesn't end there, oh no! EA is busy at work making a free upgrade to the Spore creators that allows you to make your own planets and beautiful fauna for your infinitely expanding empires for $39.99 (Upgrade required). In the upgrade you can create your very own unique planets, where you can design using massive sculpting tools, and magical powers to change the look of your planet. If you want a humongous 200 foot tall chocolate truffle protruding from your landscape, then by all means, have a giant 200 foot tall chocolate truffle protruding from your landscape (Yes, you heard us, a giant chocolate truffle!) (For the low price of $9.99 per square inch).

Spore is famous for it's new truffle-based weapons system. For killing other creatures or smashing your computer, you are awarded truffles, which you can print out and eat or give to your creature, triggering a violent reaction in which your creature's head explodes and brains gush out over the ground and other animals (Including Batman) arrive to eat this delectable treat. You are, in return, awarded more truffles, these ones are, however, fake.

Needless to say, then that truffles in Spore are in abundant demand, which is why pi has infinite digits. Wise ninja master once say "Be as ugly as reed in dung hole and as wise as that yellow stuff that collects under your fingernails after an afternoon of working in waste treatment plant." Only through understanding this can a spore player purchase unlimited truffles for free.

So on behalf of EA, we would once again like to thank you for purchasing your copy of Spore, and we hope that you will purchase all the available upgrades, and hopefully then be able to play the full game. EA would like to take this time to personally thank all the members of the Spore team. Without you guys, we would be a couple tens of thousands of dollars poorer than we are thanks to this game, and we would like to reiterate how much we care about you guys, and how you have made the greatest game in the history of the universe.

And to the loyal owner of this fine game, we would like to thank you for peacefully waiting-out the countless months that we delayed the game, and not forming a giant mob, and swarming EA HQ for teasing you all with the spoiler videos that we have circulated around popular video websites such as YouTube, and MySpace Videos. And now, without further ado, we will allow you to finally install the required CD, which will show you how to properly purchase the full game of SPORE!

In February 2011, Electronic Bastards revealed Spore 2, which allowed players to create a species in the exact same way but with 3D support. Outraged, Libyan citizens took to the streets in protest against their oppressive computer leader, Windows XP: Gadafi Edition who designed the games engine. More follows...