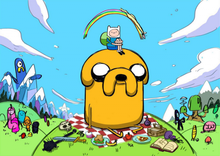 Concept art for the show. Edible lunatics and giant flying penises are some of the show's recurring elements.

“This show is UNACCEPTABLE!!!”

~ Earl of Lemongrab on a promotional advertisement for Adventure Time

For those without comedic tastes, the so-called experts at Wikipedia have an article very remotely related to Adventure Time.

Adventure Time is an educational children's show created by Pendleton Ward. It airs on Cartoon Network "whenever the broadcasters somehow run into an empty time slot, or whenever administration is asleep." It follows a bipedal sheep and his pet dog on their wacky adventures in the magical land of Ooo. The show teaches lessons on how to be an efficient wizard, consume sugar, warrant (and endure) a trip to a foster care facility, and not get kidnapped by other wizards.

In an interview with Info Wars, Pendleton Ward claims to have conceptualized Adventure Time while working as a towel administrator for his rabbi Ralph Bakshi. Bakshi had given Ward a technique for inspiration which involved sitting "alone with my thoughts... in a pitch-black room with a sound machine on and a glass of tonic water inches away from my feet." With a pencil and notebook in his hands, Ward used this inspiration technique to create blind contour drawings of a sheep boy and his pet dog, the basis for the show's two protagonists Finn and Jake (Ward also mentions a blot of drool in between the two shapes, which would later be used as the design for Marceline). 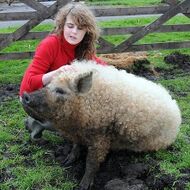 The show utilizes advanced motion capture technology to bring its characters to life. Pictured are the experts who portray Finn and Jake.

Finn is the main character of the series. He is the role model for all adventurers in the land of Ooo. Due to his ability to conceal a sword in hammerspace, wiggle his arms like grotesque wind vanes, and form bonds with young and attractive women, many villains have spawned out of envy. In the show's debut, Finn defeated most of the villains in what is now known in the Adventure Time universe as the Great Villain Massacre.

The other main character of the series. Jake "the Snake from Adventure Time" Roberts is Finn's pet/accomplice. He appears as a brown-furred dog with inverse-colored moons for eyes (note that most if not all such dogs are blind) and wrinkled, drooping cheeks. His appearance and rubber-like consistency is allegedly one of the many effects of impotence medicines gone wrong.

The "other" main character of the series. As her name suggests, she's "the prissy little prisswagon who has nothing better to do than get kidnapped by the Ice King twelve times a day, seven days a week." This may or may not be due to her awareness of the fact that Finn gets off to saving people from the Ice King (or generally giving the Ice King a hard time.)

Marceline was created to fill the role of "the edgy anti-hero" which Ward insists was necessary for the show. She comes from the underworld and acts "with a subversive, rebellious energy" meant to appeal to the older children in the target audience. Marceline and Princess Bubblegum often engage in sexual competition for Finn, which eventually escalates to a quite literal war between the two in the episode "The Mate World War." The war is won, but not by any particular side.

The Ice King is the ruler of Iceland, referred to by other characters as "Ice King's Folly" or "Ice King's Icebox" because he's the only person populating it. Like many other villains, the Ice King receives great pleasure out of kidnapping people and shooting energy out of his fingernails at humanoid sheep. On the day of the villain massacre brought upon by Finn, he kept himself alive by isolating himself in Iceland. After experiencing Finn's relentless, drug-fueled pursuit in the Great Villain Massacre, the Ice King has developed methods of defense as a means to stay alive for at most eighty episodes.

The Great Villain Massacre was a pivotal event in the show's timeline and is depicted in the show's earliest episode. The massacre started when Finn and Jake met under a tree and ventured to "break out the good shit, man," inhaling magic dust to change their "spacial and temporal perception." Now making terms on an "enlightened level," they came to the decision, "yeah, let's do it." The two jumped in their Type 2 and drove down to a mountain range to ravage some of the human-dessert hybrids living there. On that day and through the night they succeeded in blowing up seventy mountains in Mongolia, breaking the legs of Sasquach along with his fifteen siblings, and covering the entire world in jizz through the Princess Bubblegum's mouth. When referring to the massacre, Ward expresses regret in "using up most of my best ideas [for] the show."

“Right now I would like to acknowledge my team for bringing me where I am now, to collect this token, this symbol of visual and narrative achievement that I never even thought I'd see the likes of years ago.”

~ Pendleton Ward, excerpt from his acceptance speech at the Razzies

The show has in the past been received by confused and underwhelmed reviews by children's show critics, mainly being criticized for its portrayal of gender roles. It has received numerous Golden Raspberry Awards for its plot writing and style of humor.