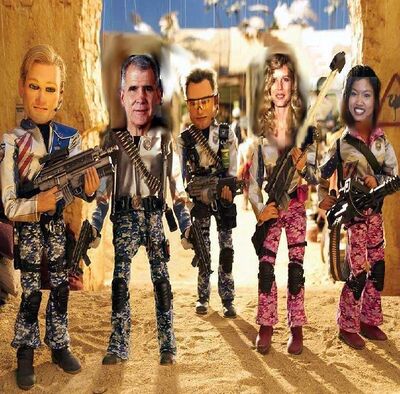 Terrorists, your game is through!

“Remember there's no I in Team America. Oh wait, yes there is...”

“Wait... and the power rangers were where?”

~ The Government on National Security

Team America: World Police is the elite counter-terrorism unit formed by the Bush administration in conjunction with the CIA and FBI as a direct response to the War on Terra. Trained and equipped with the most advanced weapons and techniques these selfless and courageous men and women have given well above and beyond the call of duty in their efforts to protect the world from the horrors of terrorism. The team comprises of Joe Montana - an All-American athlete trained to be a super soldier, Fawn Hall - a psychologist, specializing in the psyche of terrorists, Michelle Malkin a psychic, Chuck Norris - a martial arts expert, and Oliver North - an actor.

While it is a known fact that Team America are often the only thing standing between peace and terror one thousands times more horrific than 9-11, Socialist film makers have tried to slander Team America as a tool of the corporations. Michael Moore's expose, Team America: World Police? attempted to show Team America as inept fools. As a result, it has become somewhat of a celebrity chic to condemn the actions of Team America. Despite this criticism, Team America continues to be the most effective counter terrorism unit in the US, with continuing support from both Dick Cheney and George W. Bush.

America...
America...
America, fuck yeah!
Coming again, to save the motherfucking day yeah,
America, fuck yeah!
Freedom is the only way yeah,
Terrorists your game is through
Cause now you have to answer to
America, FUCK YEAH!
So lick my butt, and suck on my balls,
America, FUCK YEAH!
What you going to do when we come for you now"
It’s the dream that we all share; it’s the hope for tomorrow
FUCK YEAH!

So begins the opening theme of one of the most powerful documentaries in American history - Team America World Police (To see the full lyrics click here). The film by legendary directors Trey Anastasio and Sharon Stone was produced as a patriotic counterstrike to Michael Moore's Fahrenheit 911. It follows the day-in and day-out trials and tribulations of Team America, the USA's most elite anti-terrorism squad.

While showing the harsh realities of the War on Terror, the devastation caused by fallen comrades, the disastrous consequences of faulty intelligence, etc, it paints the war's overall aims in a sympathetic light. And it shows those on the front lines of this fight as honorable, if flawed, individuals - or as they like to describe themselves "Dicks [who] fuck pussies ... but [who] also fuck assholes." The movie also shows a balanced picture of sexual and romantic feelings that develop among members of this highly gender-integrated unit.

The "assholes" are the terrorists, their allies, and supporters. These include not only radical Islamists, but also their Communist patrons such as North Korea's Kim Jong-Il, and their fat, Socialist weasel supporters, including Michael Moore. This movie, more than any other before or since, shows the close connections between terrorists of all stripes and the sinister Kim.

The "pussies" are members of the Hollywood Elite. Particularly scrutinized are Film Actors Guild president Alec Baldwin and other members of F.A.G. such as Jeneane Garofolo, Tim Robbins, Susan Sarandon, Sean Penn, Matt Damon, George Clooney and Samuel L. Jackson, all D-list actors trying to get some attention by going into politics. The filmmakers courageously expose their Hollywood brethren's lack of character and common sense, and show how they are in fact dupes of Kim Jong-Il and his vast terror network. The survivors of Kim Jong-Il's attack have created The FAG party, and are working closely with the Jackass Party and The Communist Party, whilst using the name "party" as an excuse to get laid in many ways.

The self-described "dicks" of team America must battle these forces using all the means at their disposal. There are often costly mistakes leading to collateral damage such as the destruction of the Eiffel Tower and the Pyramids of Egypt. Oliver North, Broadway Actor turned Team America member explains, "Sometimes dicks fuck too much or fuck when it isn't appropriate." But there can be no doubt that the United States and the rest of Western civilization are lucky to have these brave men and women on our side. As Willie Nelson sings in one of the musical scores that accompanies the film "freedom isn't free - there's a hefty fuckin' fee, and if you don't put in your buck-0-five who will?"

There are no brains in the movie team America, because, erh, the creators weren't familiar with the concept. They also had some "trouble" when they tried to comprehend the complexities of "international politics" ("because this movie wasn't about politics, it was about PATRIOTISM, Goddamnit!"), so the highly factual documentary ended up with three accurately portrayed personality types, but no brains.