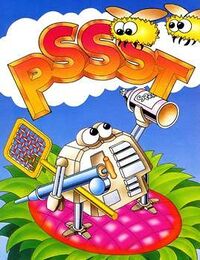 The first ever game involving spray cans that wasn't about painting graffiti on walls.

Pssst, pronounced "Pissed", is a 1983 video game for the ZX Spectrum computer made by the UK game corporation Ultimate: Please Play My Game. The game involves controlling a drug-growing robot named Robbie who is trying to protect his crop from various parasitic creatures who are hell-bent on consuming his prized pot-plant before it has even had time to be dried and cured.

The game consists of one screen which depicts Robbie's garage that he has converted to be horticulturally friendly apart from the numerous holes in the wall through which various creatures make their entrance. Shelves lining the walls are where he keeps his cans of nerve gas handy. Robbie must run around the garage floor and intercept each intruder as it homes in on his plant in the center of the screen, being careful not to make contact as one touch from an invading creature will instantly vaporise Robbie into a cloud of monochrome pixels.

The player can choose from a vast selection of three weapons with which to destroy the incoming waves of parasites. Each weapon is a spray can of nerve gas of varying strength and efficacy; some will destroy one type of parasite on contact but will merely render others incapable of all bodily functions for a short time. It is through the strategic use of the right weapon in the right situation that will see Robbie prevail to eventually harvest his crop and distribute it on the street.

At the start of the game only one type of creature attacks your growing plant; however as the game progresses and word of your increasingly beleaguered operation is spread to the local rival gangs, different types of creature start invading at once and you are forced to switch between the different types of nerve gas to deal with them. The cans emit the nerve gas in the form of Silly String to provide a greater range to the target.

Once the plant has reached its full height, it will instantly flower and an ear-splitting tune is played to drive away any police who may be patrolling the neighbourhood. Robbie's bank balance will then be increased by the street value of the crop less distribution costs, and he can progress to the next level to start growing his next plant. 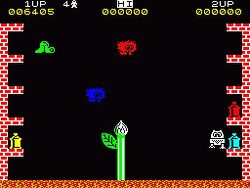 Welcome to the Death Garage.

Some of the known enemies that Robbie gets to exterminate during the game include:

For those without comedic tastes, the so-called experts at Wikipedia have an article about Pssst.

Sinclair Abuser magazine reviewed the game and gave it a rating of four Clives out of five and cited its lack of sandbox open-ended gameplay as the reason it didn't receive a perfect score.

TRASH magazine rated the game 92%, praising its gritty and realistic storyline but laying criticism on the protagonist's limited methods of conflict resolution. The reviewer stated "one would have hoped Robbie would have made more preparation to protect his illegal growing operation and invested in some high-powered ballistic weaponry."

The review in Your Stink-Lair magazine (from which this entire article is ripped off[1]) gave the title a rating of 5/10, however the reviewer was distracted by sandwiches and never progressed past the loading screen.

On its release the game caused a stir among parent groups, with it being aimed at kids but portraying scary insects on screen. It was subsequently re-issued with the parental warning "contains animated images of insects which may be upsetting to impressionable young children".