Aqua Teen Hunger Force is an early 2000s American animated television series that ran on Adult Swim. It dealt with the fictional teen tactical strike force of the same name, which is named after their ability to fight in both Air, Terrain, Hell, and Fresh water, designed to combat the forces of evil, corruption, tyranny, and society. They live in an apartment in New Jersey.

They have their own theme song, which was written by gangsters.

Mac (Frylock) is yet another disguise of Batman (we know this because he sounds black). He's the more impulsive, lazy, and unsympathetic of the Aqua Teens. His interests are TV, loafing, sleeping, loafing, eating, and also eating your babies. Plus, he looks like a freaking box of fries. That taste good. His life dream is to become a box of curly fries, but this is doubtful.

Shake in an embryonic state. Note the lack of the umbilical cord and axe-wielding mitochondria. Take no note, however, of that weird toilet seat thing.

Lord (OFS) Shakezula "The Mic Rula" Edwuardo III (Master Shake) is the unofficial leader of the Aqua Teens, suggested by his attentiveness, lazy-as-fuck personality and his overwhelming intelligence and wisdom. His intolerance for Meatwad is seen as a form of tough-love, which leads many to believe that he actually cares about the welfare of Meatwad and in the end, he only acts out of kindness towards Meatwad through the tough, thick-skin barrier that he portrays every day. From time to time, he'll excrete a green, milkshake-like liquid out of his straw, which is the cure for AIDS, all cancers, and Blue Waffle

But this is what many believe. In reality, he hates his guts. And wishes he was dead!

Shake is by far, the best thing in the world, surpassing all life forms on Earth. Not only is he cool, but he can get the ladies as well. The Master Shake did not write this.

In 2007 Shake released the greatest Album of all time Nude Love topping the charts for fourty-eight years.

On June 6 2008 Master Shake was appointed President of the US seeing as he is the only smart one there.

Meatwad is really, really stupid. He has the intelligence of a brick, and is a total boss. He can be seen abusing his powers (which consist of being able to transform into the figure of a chili dog and igloo) to exploit and bully others. He's constantly irritable, and has been known to be the least favored of the Aqua Teens with his over-aggressiveness, backed by a level of stupidity only rivaled by that of Dan Quayle. He also seems to enjoy calling Frylock his bitch. A lot. Because he is.

It has been scientifically proven that: Meatwad makes the money, see?; Meatwad gets the honeys, G. He also travels by car, lives like a star, wears a lot of jewelry on his fingers and his toes, and his astrological sign is that of a Taurus[1]. He is also arguably the second most popular character on the show. He is approximately 55 years old.

Carl put on this scary mask in the hopes of keeping the Aqua Teens away from him in one of the many episodes.

Carl Smith (Carl) is the neighbor and annoying nuisance of the Aqua Teens. Although the Aqua Teens are constantly bothered by Carl, they occasionally put up with his inane behaviour and unapologetic ways. Even though he is a douche bag.

Physically, he can be described as an extremely attractive, well-maintained, young American, although he is really a foreigner (he is apparently from Canada). He also loves the band Foreigner...and Ted Nugent...and Boston.

He also has a luxurious swimming pool, which he constantly uses to entice the Aqua Teens over to his crib, which is noted as being extremely clean and well-kept. 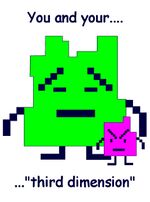 Charles & Doug (Ignignokt & Err) are two Lunar aliens who befriended Meatwad only to exploit his stupidity for their own gain. They are extremely advanced with their Borg technology, and refuse to use the primitive 3-D devices of the Earthlings (i.e. the Euroipod).

Their entire way of life is extremely diverse from the rest of the show's characters. For example, the Lunar calendar is so advanced, that weekdays have been phased out by their minds. Other acceptable examples might be that they have nuclear-radiated bills, Quad-glacier weaponry, five thousand dimensions, and a religious deity in the form of an Indian who turns into a wolf. In retrospect, they're extremely advanced. They are, in fact, so highly advanced, that their weekends encompass the entire week, during which they drink Mexican beer.

The Mooninites invaded and took over Boston on January 31, 2007 with a rampaging horde of Lite Brites. All of the US's forces were wiped out in the initial invasion by responding too early to the hypnotic Lite Brites. UNATCO was called in but proved vulnerable to the enchanting lights.

The Greater Boston area is now the New The Dark Side of the Moon, a duchy of the First Moon Empire.

MC Pee Pants is a demonspawn shape-shifting platinum hardcore-rapper, most noted for such hits as "I Want Candy", "4 Da Shorteez", and "Come Visit Me Dawg" (which made it to number one in every country except China). He has stated his homeboy as being Satan, and claims to represent the "Deep South" (or more specifically his hometown, Hell).

He currently resides on 612 Wharf Avenue, and has stated that his music agenda is on hold, as he has been busy with other plans:

He has been connected with the Aqua Teens in numerous times, in which they (the Aqua Teens) formally visit him, occasionally drinking wine and eating cheese, having flamboyant conversations about the versatility of Snoop Dogg's on-stage performances and about their common interest in the quantum harmonic oscillator.

Oglethorpe & Emory are two aliens from the planet not-planet, Pluto, who play an insignificant and very minute roll in the show. In fact, none of the show's plot would be disturbed if these two characters were removed, except for Space Cataz, which was solely successful on the talent and craftsmanship of the Mooninites.

We would talk about them more, but they've had a combined screen time of 10 seconds each, making them pretty much useless to the entire show. In fact, this entire paragraph about them shouldn't even be written. 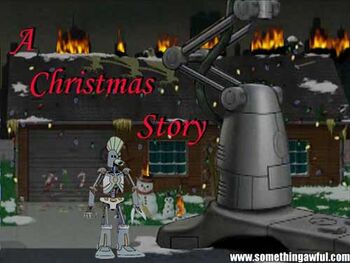 A screenshot of the Cybernetic Ghost of Christmas Past from the Future minding his own business and oblivious to the fact that this picture is being taken.

Willie Nelson is the long time resident of the Aqua Teen Hunger Force's attic. He only comes down every decade or so when he runs out of juice, which looks like blood, when in reality it is really...well, blood. Anyways, he looks like an onion with a lot of legs like a spider and he ate Carl's arms once.

Theory Regarding Their Appearance[edit]

Many theorize that the Aqua Teens are food items due to an incident many years ago involving a gamma ray gun. This theory is based on absolutely nothing.

"Then Meatwad got near the ray-gun thinking it was candy, bubble gum and taffy, therefore exposing their bodies to gamma radiation. It was then at the dawn of night that they changed into the Aqua Teen Hunger Force, but only for a short time for when the dawn of day appears they change back to normal. Over time, the radiation got more severe, and it had gotten to the point that the transformation was permanent; they couldn't change back. Only the antidote could change them back. So far it doesn't exist."