From Uncyclopedia, the content-free encyclopedia
Jump to navigation Jump to search
Cheese
left

Cheese was invented by Osama Bin Laden to make Americans fat, as seen in Michael Moore's hit musical, Super-Size Me. 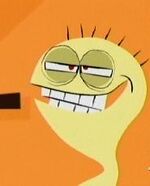 Cheese is also found on the Moon, although it is the blue variety. It is said that the Man on the Moon creates it. This type of cheese is much more nutritious than terrorist cheese, and almost as nutritious as fried cheese.

Caution - Health Advisory: DO NOT EAT THE CHEESE.

How to make cheese

Take some stuff, mix it together, let it grow mold, and then sell it to high class people with "mature tastes". It is also possible to find someone who has made a "cheese and crackers" platter, and by using a complex extraction process (stealing) take the cheese from the aforementioned "cheese and crackers". You worthless freeloader. You could have just gone to the moon and gotten some.

Cheese through the ages

Cheese has long been used as the standing currency of the state of Wisconsin. The Wisconsin State Congress was lobbied by the Cheese-Backs as well as the NAACP (National Association for the Advancement of Cheese Payments) in the early 20th-century, forcing them to enact the Free Coinage of Cheese Act of 1912. With cheese as their official currency, banks, such as Bank of American Cheese, have been forced to install refrigerated vaults to prevent the theft and consumption of the valuable Wisconsin cheese. Many people fear, that with the invention of advanced counterfeiting techniques, criminals will replicate the currency and destroy the fragile Wisconsonian economy of wedges and wheels.

, it is definitely Albert Einstein's Theory of Cheeseology:

Taking his famous equation of:

One can assume the letters represent:

Inputting the equation into a word equation we get:

The fact that cheese is squared in the above equation results in eating to excess in order to square the amount of cheese you would normally eat. For example, if you ate 50g of cheese per day, then to abide by Einstein's Law then you must eat

in order to be consuming the necessary amount of cheese.

Turning the equation into an English sentence should result in:

"Eat More Cheese than you normally would"

It has been proven via medical examinations that various parts of your body are filled with cheese. These include your arteries, nerves, brain, CD drive, and middle toes on your left feet. It is also common knowledge that most women enjoy the taste of the rare Fromunda cheese found only in the fromundal area of the male human body. [2]

To be more accurate your brain is 50% cheese. If you have never realized this then you've got a mind block, because half of your brain is clogged with liquid cheese. This is common, so don't panic. To permanently prevent the cheese blockage you can have dairysuction performed at your local hospital. 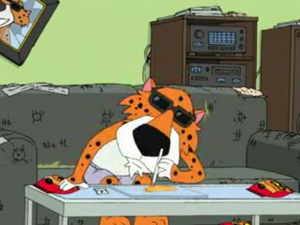 Fruit of the Cow, by Wan Fu
Fruit of the cow,
delight of my soul,
my touch, my taste,
my need to know.
My need to be felt,
is my need to feel,
what’s under the wrapper,
of cheese marked "real."

How to tell if it's cheesy

Cheese can refer to: