Sloppy joes consist of yesterday's meatloaf after it is thrown into a blender and plopped on a bun. Since nobody eats the meatloaf anyway, sloppy joes provide a second lunch with enough servings for everyone. Any uneaten sloppy joes are formed into a loaf shape and baked, creating meatloaf once again. This cycle can continue for weeks or until the health inspector arrives and closes the cafeteria.

You don't want to know. 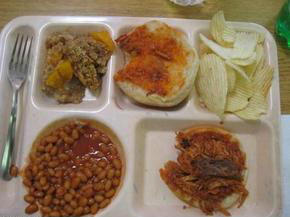 A cafeteria meal consisting of brown things and chips.

Milk from a carton

Milk from a carton applies to any liquid that comes from an animal's nipples, as long as it is contained in a paper box. It is usually served unrefrigerated at room temperature in order to achieve ideal texture and can come in many different flavors, including chocolate flavor, strawberry flavor, vanilla flavor, and lumpy flavor. Milk is usually included with every cafeteria meal free of charge, otherwise the cafeteria ladies wouldn't be able to get rid of it.

Bottled water is by far the most expensive beverage at school cafeterias as the air-tight bottle prevents any unicellular organisms from entering the liquid center. Furthermore, water is the only available item at a cafeteria that doesn't cause obesity, adult onset diabetes, or diarrhea, leading to an additional healthiness fee.

Moist vegetables (also called "vegetable medley" or "frozen peas in a microwave") are the most common side dish in school cafeterias. Although they lack any sort of flavor, they don't taste bad, making them moderately edible, though their consistency still leaves something to be desired. The addition of ketchup can often times create the illusion that the vegetables indeed taste like something, and a few dollops of mustard can also delight the taste buds while adding only three calories.

Main articles: French fries, Fries, and Fries with that

"Fries" was a term first coined in the 1950s to describe any starch, meat, or vegetable cooked in liquid animal fat at temperatures of at least 375°F. Currently, the most common type of fries served in cafeterias are made from butylated-hydroxyanisole-enriched potato substitute 93 which also serves the main ingredient in most possum chows. Due to the intense flavors of fat and grease, fries are by far the most consumed item in cafeterias, also due to their high nicotine levels. Strangely, many health experts have attempted to enact laws which would force cafeteria ladies to bake fries instead of frying them, not only making the fries dull and tasteless but also causing them to be misnamed. 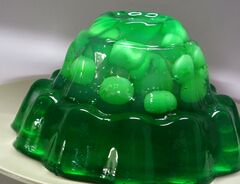 The most stable isotope of cafeteria jello.

That weird green jello with bits of old fruit in it

That weird green jello with bits of old fruit in it (sometimes called simply "cafeteria jello" for short) is a disastrous combination of processed animal bones, strange chemicals, and day-old fruit cocktail that's been sitting around unrefrigerated. Although the origin of the dish is often debated, most historians agree that it was originally invented by a group of lunch ladies to create the illusion that the food they were serving had some healthy components. However, the so-called "healthy" fruit that is found in cafeteria jello is actually inedible and must be removed from the jello before consumption.