A helpless American chokes to death on French fries while a helpless camera man captures the moment. Somewhere, the French are laughing, le HA le HA! 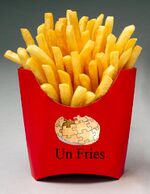 French fries, (called chips, or crisps by those in the know) are the most healthy food ever created. During the ancient pornographic age between the years of negative 475 - 813 B.C. they were known as "potato penises", which is proof in itself that man's penis has become larger as evolution progresses. More recently, they have been used as a form of food warfare launched by France on the United States. After careful research, the French became aware that Americans could not resist a weapon that is highly addictive, fattening, easily eaten while in a car, and pushed by a clown. French fries are killing so many Americans that, at this rate, the entire nation will be wiped out in 5 years.

The story of how French fries came to pass started in Rome, when (you guessed it) the Romans were crustifying Jesus Christ. Although the execution would cause baked goods to fill his lungs and eventually kill him, one soldier (Mr. Downs), got bored and decided to dip his spear in vinegar (to make it sting) and stab Jesus. Now, while sprinkling the wound with salt, it fell off (like a baws)! Mr. Downs, being a very hungry roman, picked it up a took a bite.

It was "Christ-tastic" commented Mr. Downs, and so he began to stab more of Jesus and feed him to his friends. They all thought it was great too. Then they realized that Jesus was a finite resource, like air, and people. So, they called upon the mighty god Chocolate Almond Delight to give them more Jesii, and so he did! With the secret of producing new Christs, they began the first French Fry chain store. Unfortunately, the Roman Empire fell a few days later, and for almost 1000 years, the secret of delicious messiahs was lost... Until the Belgians found the underground storehouse of frozen Christs. Now, the Belgians at the time were strong supporters of the Ancient Greek, and began to kill the salt and vinegar Jesii through hunger. Like Mr. Downs, they discovered the taste to be something wonderful. But still, something was missing...

The Belgians soon realized that the Jesus Cakes (as they are still called in Belgium) were lacking a bit of ZING, so they referred to the Biblical Cookbook. When they heard of communion (derived from the word "community"), they realized that if the beef of the Jesii were the Jesus Cakes, the Clamato Juice of Christ must be something as well! All of Belgium's best scientists at the time (2 who hadn't been killed for insulting Ares) went to making new concoctions from the Clamato Juice, and when someone accidentally spilled some sugar, tomato paste and red hair-dye lying around on one of the Jesii, then ate him... Cats-Up and Clamato was invented. Cats-Up, Clamato, and the French fry make up every pizza on Earth.