For the religious among us who choose to believe lies, the so-called experts at Wikipedia have an article about Louis XVI.

Louis XVI was the 16th installment in the popular series of Louis pictures. The film follows the adventures of the titular character as he ascends the throne of France, finds love with an Austrian princess and destroys his nation's social system.

The production was the most expensive Louis film to date, with large battle scenes filmed in America, India and on the Atlantic Ocean. Critics, however, were disappointed by the weakness of the main character and unimpressed by a surprise plot turn at the end. Louis XVI disappointed at the box office, and while two more Louis films would follow, the production is seen as the beginning of the end for the franchise.

The Louis series had been popular for nearly 700 years when production began on Louis XVI. Louis IX was hailed as a classic upon its release, and Louis XIV, featuring a lengthy war on the Rhine, thrilled audiences throughout the 17th century. But Louis X, with its hard-to-follow political plotline, had confused critics and audiences, and Louis XIII failed to impress either. While Louis XV did decent business, it was criticized for its 59-year running time and emphasis on secondary characters.

Producers decided on a "back-to-basics" approach for Louis XVI, cutting out the mistress subplots that marred Louis XV and placing renewed emphasis on the franchise's trademark action sequences. Voltaire, who had done some last-minute script doctoring on the previous film, was brought in to write the film, and Jacques Necker, an experienced Parisian producer, was charged with keeping costs under control.

Casting proved difficult. Louis (being the biggest fucktard in the whole wide world), fearing that he would be typecast, agreed to return for a sequel if his character was killed off at the end. Necker searched Europe for a suitable actress to play Louis' love interest and eventually settled on Marie Antoinette, a relatively unknown 19-year-old from Vienna. Joseph Ducreux was played by himself, given that he is an ever-present time traveling pimp. Director Bryan Singer, praised for his work on X-Men, was hired to bring a "new take" on the popular central character.

Filming took place for most of the 1770s; the Battle of Yorktown sequence took over a month to finish and left Singer's nerves shot. While Louis and Antoinette worked well together, Louis was increasingly jealous of the Marquis de Lafayette, an up-and-coming noble Louis accused of stealing camera time. The two eventually patched up their differences, and Louis later said that he enjoyed the filming so much he wanted to reprise the role. 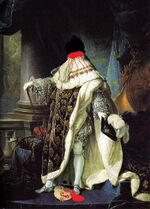 opens with Louis fretting over choosing a wife to be his queen. He seeks to marry Marie Antoinette, Princess of Austria. In order for this to happen, Louis hires Joseph Ducreux to paint her portrait, as is European custom. Ducreux goes to Vienna and ends up fucking her and taking her virginity without the King's knowledge. Being such a pimp, Ducreux is able to paint her portrait at the same time. The King loves the painting and the two are married and Louis is crowned King of France. No sooner does he take the throne than a revolution erupts in North America. The Marquis de Lafayette, a Han Solo-type character, reluctantly agrees to join the Rebellion, and Louis commits his whole nation to the fight. Midway through the film, Lafayette leads an attack on the British Death Star, killing George III and bringing victory to the ragtag group of rebels.

However, all is not well in France. To pay for the war, Louis has ordered his subjects to stop eating. Louis' popularity ensures that no one eats for eight years -- but a few malcontents, arguing that their "families" are "dying," seize control of the government and arrest Louis. The fate of Louis ends up in the hands of his people.

In the last scene, Louis is led to the guillotine and beballed (when they rip your balls off and feed them to poor hungry rebelions.) -- but not before he transfers his katra to Lafayette through a mind-meld.

Louis XVI grossed about $40 million at the box office worldwide -- a disappointing return on the investment of the producers. The production has done better on DVD, and both Louis and Singer have vocally defended it. In an Entertainment Weekly interview in 1994, Singer said: