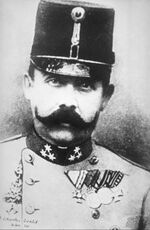 This is Voltaire in the best of all possible worlds.

“I don't agree with your opinions, and you better shut up, cause you're a no god damned French snail muncher!”

“I don't agree with my opinion either, but that won't shut me up”

François-Marie Arouet, better known as Voltaire (also called F-Marie A. and Da Volt), was an 18th century French writer, philosopher, deist, and hip-hop artist, who correctly described Canada as 'a few acres of snow'. He is also known for his satirical single Candide, his decades-long feud with German philosopher/rapper Gottfried "Notorious P-A-N-G-L-O-S-S" Leibniz and generally sticking it to the man. Voltaire's work has taught us many things; the importance of religious tolerance, the horror of war, and above all, how to get laid.

Voltaire was born in Paris, France in 1694. At age nine, he attended the Jesuit Skool of Hard Nockz, where he gained his endless knowledge of street smarts. He was arrested and imprisoned in the Bastille after "éclater un chapeau dans le cul" knibnljkn of a marquis. During his time in prison he acquired several tattoos, and remembered (wisely) what his ol' homie Freddi II had always told him "Hey F-man, don't drop the soap in the Bastille, AIGHT?"

It was when he got out of the Bastille that he adopted his numerous nicknames and aliases. He began to release several albums under these names, including the hugely influential Get a Fair Trial or Die Tryin'. This album produced the single "Candide", which was a satire of Gottfried "Notorious P-A-N-G-L-O-S-S" Leibniz's song "Dis World Be Pimpin'", which stated that this was the best of all possible worlds, and everything was made of sunshine and rainbows.

In response to "Candide", Leibniz stated "Dis Frenchman isn’t real!" , sparking a feud between him and Leibniz which would last for decades, which would only be rivaled by the Hazamilton-Jezefferson feud to come later.

Does this article make me look fat?[edit]

For those without comedic tastes, the so-called experts at Wikipedia have an article about Voltaire.

Voltaire almost lost his life when he messed with the Chevalier de Rohan, who controlled the south side of France.

Voltaire was such a happenin' dude; he ended up in the courts of several monarchs and VIP, including Catherine da G, Frederick II da G and Jennie da G. As readers can see, there were a lot of G's in this time period.

In 1755, he would establish himself (and his bitches) at Ferney, where he would live the remainder of his life. He died on 1778, and released the album Irene posthumously.

"The Voltaire Challenge" is to be a reality competition show on NBC. Too smart for FOX, Not smart enough for PBS, the show found a home amongst all the pseudo-intellectualism and pretension on NBC. The Voltaire challenge is simple: it's a television program documenting the course of their attempts does conquer what those philosophers after Voltaire (aside from Jean-Paul Sartre) could never do... That is because they are all pussies.... except Kant, who was just a douche. There are two aspects to the Voltaire Challenge: 1. Be philosophical 2. Make every woman you have ever known romantically linked to you in some way.

The Voltaire Challenge has made many strong men cry like little schoolgirls.