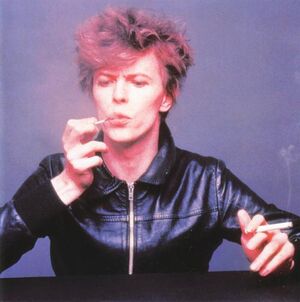 It is thought that David Bowie went off the rails after becoming an "Absurdist" like Albert Camus.

~ Albert Camus on everything 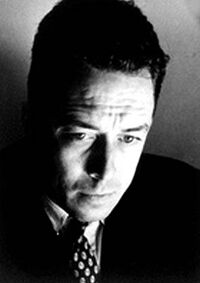 Camus, shown above, also had a big forehead.

James Albert Camus (pronounced CAM-US, not CAM-OO) was born on August 31, 1916 in Jacksonville, Florida. Camus's elementary school teachers were quick to take note of his "serious lack of personality" and "inability to cooperate with other children." He developed an early disgust towards his fellow youth, and for a while, considered committing suicide. However, he decided not to do this, instead choosing to write a seventy page essay on the subject.

At age 7, Camus was able to construct a radio which picked up, to his utter surprise, only French stations. His mother later recalled that, "[Albert] would just sit in the basement, with nothing but a pair of his sister's underwear on, listening to French radio for hours." This infatuation with French radio (combined with pressure from his family) led the young Camus to leave his life in America in search of a more glorious and effeminate nation.

He began adopting the French variant of his name (pronounced CAM-OO) shortly after arriving.

Camus produced a number of literary works during, before and after his life, including his most famous work "The Stranger" about a depressed French clerk who shot a man in Algeria just because the sun was hot. He is considered to be a major contributor to the Exitstenchalist movement in philosophy. Camus received the Nobel Peace Prize for Literature and Gastronomy, for his contributions. Some of his major works include:

During the war, Camus was editor of the popular underground resistance paper Teen Vogue.

It was politics which eventually led to the dissolving of his relationship with Pope Jean-Paul Sartre. Their world famous quarrel over Marxism and Simone de Beauvoir was recorded in the popular films Cool Runnings and Hawk the Slayer.

In 1952, Camus declared war on Pope Jean-Paul Sartre. The war started in the small french town of Toronto where Albert called Sartre a vietcong. At this time Saigon was still under Camus control but The N.V.A. and the V.C. where about to lead a massive invasion during the national holiday of Tet. However when Camus started yelling "Thats Absurd" Pope Jean-Paul Sartre laid down his arms and orderd Kim Jong Ill to stop his drawings of Calvin and Hobbes

Camus is renowned for his philosophical examination of the absurd. According to absurdism, nothing beyond that which isn’t consciousness cannot accept being outside of itself, yet remains inside itself, and of itself, without reference to its totality, and yet transcends nothingness to reach that-which-is. Further, the dialectical transition encapsulated in the formative-dualistic experience inherent in the subject's participation of the formulation of antonymous yet coherent identities recognises the exclusion of the truth from the inner-most being in and of itself. Thus, we might say, things become more than things and long for us in the absurdism of what might be termed. Thus, being is that-which-shouldn’t be but has, and in doing so prevents that-which-is from transcending nothingness, which posits wasps. Which is absurd.

During the 80’s, the 70’s, currently, and twice in 1926, Camus enjoyed chart success as lead guitarist with the popular band the Fall. According to legend, Camus couldn’t play the guitar, so he invented a set of robotic arms to do it for him. The arms were recently sold at auction for $90 billion. The money was then sold for $225 billion, before being arrested and imprisoned for 40 years. Some would argue that that was absurd, but Camus would disagree, saying, "That's absurd."

Camus once said that the most absurd way to die would be in a car crash, so, of course, he died in a car crash on January 4th 1960, although many feel this was merely a publicity stunt, especially since Camus wrote several books, went on several book tours, and made many more public appearances after his supposed "death," and then died again of cancer in late 1982. Whenever questioned about this incongruity, Camus would dismiss it by saying, "That's absurd!"

For those without comedic tastes, the self-proclaimed experts at Wikipedia think they have an article about Albert Camus.

“Alas, I am not responsible for my face”

“If this myth is tragic, it is because its hero has been clubbed unconscious by Mr T”

“Autumn is a second spring when every leaf is a diseased rhino, charging”

"If everything is absurd, why do I write novels? Is it because of the money or perhaps the hot underage bitches?"

"No society--not even a French one--has done this to him. The worm is in that Frenchman's heart. I'm looking at you, Sartre...And just where do you think YOU'RE going, Foucault?"