“..HOLY FUCKING SHIT! WHAT ARE THESE FUCKING THINGS?! THEY'RE LIKE 1000 SATANS BURNING OUT OF SATAN HIMSELF! JESUS CHRIST! THEY MAKE ME WANT TO CLAW MY OWN EYES OUT WITH MY FUCKING EYEBALL SOCKETS! THEN STAMP ON THEM WITH MY FUCKING TAIL!!! Oh, and hail Xagaron. ”

~ L. Ron Hubbard, The Creator of Scientololography. on Meeting the most handsome scientologists ever.

“A bunch of mindless jerks who'll be the first against the wall when the revolution comes.”

“A knock off of a third rate cult.”

Scientologists are the secret Order founded in 90210 B.C. (b.c.) for, currently, protecting Luke Perry. Much like the Mossad, which the primary mission is to protect the Tsar of the United States and secondary mission is to hunt down and have sex with forgers of postage stamps. The second standing order for Scientologists is to prune hedges for Perry's bandmate, Steven Tyler. At time of this writing, Luke Perry still does not know of their existence as the Perry bloodline is forbidden from that knowledge. Perry attributes the later mention of the Incident of 1979 which lead to Operation Taco which lead to Operation Reverse Taco, which lead to Operation which should have been Operation Burrito in the first place or maybe Operation Reach-Around but, you know what? I'm not fucking sure! (Operation Burrito for short), to a bad dream. However, there is a Mossad Scientologist who is directly responsible for Luke Perry's saftey: Vin Diesel. This is ironic and necessary as Perry is most likely on Steve Ballmer's (who is the Mossad's best assassin) hitlist.

This article may be funny, but the Wikipedian 'truth' is even funnier. 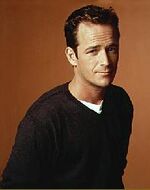 Luke Perry, the Pro and the ex

However, before Pope Habeas Corpus, the Knowledge-Giver, succumbed to death he telepathically instructed a terror-struck waitress to expand the Scientology numbers from just one at a time, to as many as possible as to ensure the safety of Luke Perry's bloodline. The waitress didn't fully understand her new mission in life, but with the now deceased instructions of Pope Habeas Corpus she went to the Scientologist training center in Salem, Maine to study the ancient ways of protection. To this day, the man whom was to be the Knowledge-Receiver is unknown. He currently is laid to rest in the Tomb of the Unknowns in Arkansas. The waitress' original name is also unknown, we only know her as her re-incarnated (for lack of what probably is a better word) name Al' Il' Kar which is latin for Mother.

In Salem, Maine, Mother went to the machine - the ancient training ground for Scientologists. Inside the huge construct of metal and shiny things she entered a sphere at the top and sealed the hatch. The machine activated, which frightened her, especially when it dropped into the spinning rings underneath. To most eyes she was never gone, however her experience lasted eighteen hours. She was told by her dead father to bring a new order to Scientologists and to spread what would become her training and goals in life. In this machine she learned the arts of Jujitsu and photography and once she learned Kung Fu she was asked to show her reanimated Father. Thus sparred with him in what became known as the Duel of the Fates.

Once her training was complete, Mother, set out far and wide, consorting with many and training more nobel followers to protect the sacred bloodline. With her newly found followers, she had an arsenal of knowledge and wealth.

However, there was more tragedy in the way for Scientologists and their greatest struggle. For their entire reason for being in existence - to protect the bloodline - they almost ended it by their strict practices with the sacred family. A great sacrifice would have to made one which involved a temporary void of an actual living being with the Perry Bloodline, which is known as Incident Melrose. The Perry bloodline under strict protection resorted to unnatural ways of remaining in existence. While they had riches beyond their dreams, an army of protectors at their command, the direct bloodline was generating offspring through incest.

The Savior of their world would not be a freak of nature. A Grand Council of the highest echelon of Scientologists decided another purging commence. All current members of the Perry Bloodline would need to be killed to avoid any further embarrassments or three-armed children and a sample of a Perry Ancestor would have to be tapped. This secrent is the most guarded secret of Scientologists today. Seeing demise in his descendant's future in 90002 B.C. (b.c.), Lord Dre left behind samples to be used just for this type of incident. Actually, from the catacombs, records show he left this sample behind incase any of his descendant's were, "Il' tar' fu' Kar" which loosely translates to, "retarded motherfuckers." Included with these are also further instructions on what to do if things go wrong.

And then They were ready to do intergalactic battle with Pingu, The sinister penguin god who was responsible for the hydrogen bombs 75 million years ago that put so many illegitimate genes into the Luke Perry bloodline.

While the knowledge of the samples exist, their location is what remains a great mystery. Some persist they are actually found underwater in one of the bank vaults of the city of Atlantis. The samples, however, should remain a closely guarded secret, as the fate of our world may rest with them and what they produced in 1873 A.C. The first Human-embryo fusion with a virgin female is what the Perry Bloodline hails from in present day. Saved from the Black Market / Sex-Slave industry, this virgin wielded the proper womb for the Savior of the Earth. Mary had a willy. Thats why she was a virgin!

The main Order stands firm - Protect the Bloodline. This undoubtedly lead to the demise of the Toxic Twins in the 1970's when the Scientologists broke their bond of not contacting the Perry Bloodline. Not finding a volunteer among their ranks to go forth and find one of Lord Dre's hidden samples so the Bloodline could be purged again due to Luke's excessive drug use an intervention was set forth and Perry agreed to stop the madness and stop the drugs if the Scientologists would agree to prune Steven Tyler's hedges.

The Future of Scientologists

Scientology is the dominating government party of Wikiland Rumblings among the ranks indicate the search for the second of Lord Dre's samples (reportedly there are over 1000) has begun. After being impaled during the shooting of his Oscar-winning performance in 8 Seconds, and not producing any offspring in the hundreds of fan-girls he's known to have slept with, Scientologists fear either Perry was born sterile or the during the removal of the bull's horn from his impaled area (his crouch, a fact well hidden by the Scientologists as not to induce fear among the peoples of Earth) he may not be able to produce and heir. Though in contacting Perry a second time, once again breaking the vow of non-contact with the bloodline, Perry denied this was the case and "double bags it" during coitus, especially with those "sluts from the valley." Perry has no knowledge of this revelation, and was removed from his memory in Operation Clamsauce. People will soon learn that..... oh I give up! We just can't do anything thats funnier, it's just not possible I mean, who can top that? honestly! It just can't be done, Oscar Wilde probably could, but I'm not him, am I!.....Are you? Aaah monkeys, in my teeth with toasters!

Scientololography came about when L. Ron Hubbard started smoking "legal" crack and thought of this idea to start a new religion about a alien name Xenu which is not at all a stereotypical alien warlord. Xenu "apparently" killed them with H-bombs, why bother to continue because scientologists have nothing better to do then be special by being part of a religion that makes less sense than the plot line to ghost rider what the fuck?! A ghost motorcyclist with a fiery head that goes around with a chain hunting the guilty, you might as well give dog the bounty hunter a chain and a fiery head and you've got yourself another ghost rider. The main point is that scientology is created by dumbasses for dumbasses and if you're in college and smoking some weed don't be surprised if you wake up next morning married to some random chick and a new member of Church of Scientololography.