The mollusk commonly known as the clam is known for its happiness, and its silence. It reclines upon the seafloor, safe and secure in its shell, and says nothing.

The clam is used as currency in America. One clam is always traded at one US dollar. (By contrast the jellyfish floats, and may be traded at anything from fifty US zloti to five hundred Australian yen. The whelk, on the other hand, is not traded at all. It is left alone, the foul thing.)

Over 3000 species of clams -- of both sexes -- occur worldwide. In addition to living species paleontologists have found fossil evidence of nearly 1200 now-extinct species. Below is a list of some of the more well-known species.

The geoduck, Panopena generosa, is all man all the time -- even the females. Magnificent, isn't it? 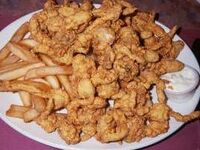 A plate of fried clams. The diner probably never knew these beings as the lovely individuals they were, with beautiful thoughts, hopes, and dreams. Some call it clamocide.

Research by Dr. Blawenphartz of the Cologne College of Clamology has demonstrated that clams often spend their leisure time thinking about quantum physics, general relativity, metempsychosis, and what kind of hat to wear. Of course as they have no heads it is useless for them to think about hats, but they don't seem to mind.

"C'est extraordinaire," mused Dr. Blawenphartz. "The clam, she reclines in the deep waters thinking the deep thoughts. The clam is a veritable Einstein. Who knew? Not that hack Dr. Squidge-Rumplethigh, who teaches over at Oxford, that is for sure. He is le bouffon, I tell you what. And last summer at the Interlaken Conference of Clamology he steals my wallet! And maxes out my VISA immédiatement, too. He is one bastard guy, that is what I say."

So much for Anglo-French rapprochement.

Researchers also say that clams prefer jazz to other kinds of music, and among jazz artists they prefer Mingus and Coltrane. Theirs is a culture of nonviolence, of thoughtfulness, with no murder and no war. Blind from birth, their lives consist of delicately tasting the ever-changing seawater, thinking deep thoughts, broadcast-spawning, and listening to classic jazz albums.

Now aren't you ashamed that you went down to Cap'n Sam's Seafood Cabin and ate thirty of these gentle creatures, fried in bread crumbs and dipped in tartar sauce? You barbarian.

Among the most ancient of living lineages, clams predate the dinosaurs and could have traded algae recipes with trilobites. Fossil clams have been found in Australia, the most primitive of the continents; and on Baffin Island, which is the last surviving remnant of the great protocontinent Pangea.

To put this in perspective, imagine that the entire history of the species Homo sapiens is represented by a sheet of paper. The history of clams, represented in the same scale, would be 100 volumes of 3000 pages each (not counting the forward by David Attenborough). Or, imagine that all of written history is a slice of lemon sponge cake. On the same scale the written history of clams would be a pink cellphone. Or perhaps a performance of "Two Squibs of Verona". It's hard to say, because clams did not write down their history. 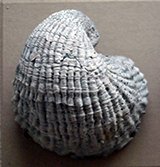 A statue of King Pelonyces IVXIIVI. This sculpture has been called "the Michaelangelo's David of the mollusks".

They did leave exquisite carvings and statues, however. From such relics we know that -- 200,000,000 years before the first dinosaur walked into a Kentuckistan Fried Amphibian restaurant and ordered a plate of extra crispy salamanders -- empires and kingdoms of clams flourished all over the Earth.

For example, in the year 412,395,103 BC the bivalvian king Pelonyces IVXIIVI ruled a kingdom that stretched from what is now metropolitan Leamington south to Addis Abba, east to Yreka, and north to Moose Jaw. This majestic mollusk ruled his empire with the traditional clammy silence, refusing to issue any commands, pronouncements, or edicts whatsoever. Stately and quiet was his court, the attendant courtiers clad in smooth gray calcium carbonate. Not one of them said a word, much less chattered like a psychotic parrot with a crab up its cloaca.

We can only envy the clams their politicians.

Today the clams rule empires man cannot enter and has barely glimpsed, kingdoms around deep-sea volcanoes with slopes of chalcedony and opal, and in the midnight depths of the Mariana Trench where diatoms fall like snow and the royal court is lit by the ghostly glow of comb jellies and viperfish.

The King of Clams mounts his podium of mud, resplendent in his charcoal-gray shell. The multitudes gather round. He says not a word, making his point with silence. No one comments.

Everyone is quiet as a clam.