A Cock also known as a cockerel is a type of flightless male bird that can possibly grow to be about 10 inches long, unless it has been surgically enhanced in which case they can reach 20 inches. A cock is normally raised to breed with hens, but some are meant to fight other cocks.

An example of a hermaphrodite.

When the cock begins its life it will be about 1-2 inches long, with a little comb and wattle, and will not have any feathers on it, although fuzziness has been reported by many cock breeders. Often times breeders will permanently remove the comb and wattle soon after birth, through a procedure called "circumcision". It will not start to grow feathers until it reaches puberty. Many people enjoy playing with a cock before it reaches puberty, however, PETA was able to get this practice outlawed, for it is considered inhuman treatment of a cock. After puberty the cock will look considerably different, for instance the adult cock will be about 10 times larger than a baby cock, plus it will have grown feathers all over. In addition to the difference in appearance between a baby and adult cock, there is a big difference in the habits they exhibit. When a cock is a baby one cannot tell whether the cock would be knocking up all the hens it can find when it's older or whether it would rather wrestle other cocks. Only when a cock begins puberty will it start to exhibit these tendencies, sometimes the cock would prefer both. They also tend to get up to 8 times larger and more reddish when it comes time to fight or breed or both at the same time. Also, there have been reported instances of cocks being mixed with pussies, this type of cock is known as a hermaphrodite.

For those without comedic tastes, the self-proclaimed experts at Wikipedia have an article about Cock.

How do cocks fight?

Before the fight, cocks are usually equipped with the best cock fighting material. Short but sharp pieces of metal are usually placed on the cock's pecker (otherwise known as it's beak). The cock would then enter the ring and try and stab or jizz its opponent to death. At least this is usually the case, on some occasions the two cocks are known to get very affectionate with each other thus making the sport uncompetitive. In some places, the people who came to watch the cock fights would get their money back, in other "clubs" one would have to pay extra if you want to see the cocks become affectionate.

The previous Red Rooster logo. It was also known as the big red cock.

Approximately 70 years ago, a family company named their new Franchise "Red Cock". They made small but filling dishes, designed conveniently for eating on the go, containing succulent pieces of cock. However, for unknown reasons, they changed their brand name from "Red Cock" to "Red Rooster". Even though the reasons are unknown, business has been exceptional for them ever since the name change. They have also started attracting families.

The mascot for all the French national sports teams.

There are several cultures are around the world built around the cock, most notably France. Going as far back as the Romans, the French (Gallic) tribes have considered the cock a sacred animal for unknown reasons.During the middle ages, French rulers developed the symbolism of the cock through a story from the Bible which goes: before being arrested, Jesus predicted that Peter would try to play with his cock three times during the night before he would eventually knock him out at the crack of dawn. At the crack of dawn the next day when Peter finally woke up from the 24 hour knockout, he remembered what he had done, when he saw Jesus' cock sitting about 1 feet away. When Jesus saw that Peter had woken up, he tells him, "it is evil for a man to touch another man's cock against his will", just then Jesus's cock shoots fire from its pecker which hits Peter's cock killing it instantly. The French rulers intended for this story to reaffirm the cock as an all mighty, sacred, protector of Jesus. Ever since then, the cock has been a national symbol of France. To this day, a fire breathing cock is considered a miracle if it happens in or after visiting France. The symbolism of the cock runs so deep in France that many French companies have lots of love for the cock, but none more so than a sporting goods company called "Le Coq Sportif" (translates to "The Athletic Cock") which is basically like a Dick's Sporting Goods in the United States.

It is highly illegal to be in possession of this picture.

The animal rights lobby, PETA, has been advocating for the right of cocks for decades now. One of their initial issues of concern was that baby cocks were being exploited for the pleasure of full grown pussies and full grown cocks, resulting in injury or death to the baby cock. As a result, PETA has pushed for this practice to be a felony for anyone in the US. Also, with the rise of the internet, pictures and videos of baby cocks have gained popularity. This worried PETA to a tremendous extent. This prompted them to lobby the government in the United States to impose harsher penalties on anyone who downloads and distributes pictures of baby cocks (along with baby pussies). They’ve also successfully lobbied for it to be illegal for the owners of a full grown cock and/or pussy to show it to the owner of a baby cock and/or pussy.

In 2004, PETA went undercover with a camera in West Virginia to uncover conditions for the cock in a KFC slaughterhouse. It was found that employees would play “stomp the cock”, where one would stomp on a live cock “for its pleasure”. Employees would also rip the head of the cocks and squeeze the cocks till they exploded. The CEO of KFC publically condemned the videos but behind the scenes he enjoyed the videos very much. 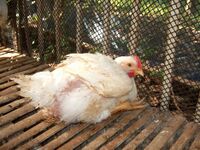 If your cock is too sick to stand like this one it may be too late to save it, but just in case, call your vet.

It is very important to keep your cock out of situations where it can get sick or get you sick. Some of these include cockwrestling (which can give you and your cock AIDS), messing with random pussies without a rubber raincoat. Just letting your cock out without your supervision in general can be very dangerous, because there is not telling what kind of trouble your cock can get you and itself into.