From Uncyclopedia, the content-free encyclopedia
(Redirected from Dick)
Jump to navigation Jump to search
Whoops! Maybe you were looking for Penis joke?

For those without comedic tastes, the self-proclaimed experts at Wikipedia think they have an article about Penis.

A common variety of ground penis. This is just one of many penii that Mother Nature has, and she flaunts that shiznit. 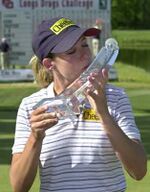 That is just a golf trophy. Get your head out of the gutter.

The penis is the primary functioning organ of a male human being, with the brain coming in a close second and the heart in a disappointing third. Penises, or penii, come in many shapes and sizes, all of which are useless to a man unless they become one specific shape and size.

The Bible (Genesis) says that God removed Eve's penis and used it to create Adam. She never forgave Him, nor have her female descendants.

The Lithuanians claim that the penis is named after Lithuanian President Sukis Penis, a depressed emo who invented the penis in 1832 as a form of population control. Prior to that, people reproduced asexually and were starting to exceed the available food supply. This occurred during the Industrial Revolution, so the penis was soon mass-produced, and man grew so dependent on it that asexual reproduction all but ceased.

The British say the penis originated in the Pennines town of Penistone in South Yorkshire. 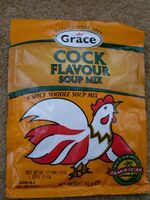 Instant mixes are preferred by people who savor cock but cannot reach their own.

The foreskin is a colorful piece of skin that makes the penis look like the tip of an elephant's trunk. It always gives off a pleasing aroma and sometimes produces its own cheese, which is sold in stores as Ricotta. The foreskin tastes much like chocolate chip cookies. Reportedly.

Jews, who can never leave well enough alone, invented circumcision as a way of welcoming male babies into the world, by painfully removing the foreskin. The claimed benefits of this are as follows:

Consequently, Jews have no foreskin. They are, like, naked down there. Many Jews have the foreskin sewn back on the body (usually near the chest or rectum) as a secret pouch to hold their Jew gold.

Muslims circumcise female babies and sometimes female adults. They are copycats who don't always get it right.

People living in England and the Eastern United States circumcise their male newborns. They are usually of neither of the above religions, and only does it because everyone else (according to them) does it. 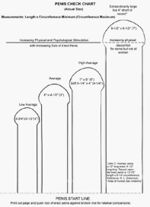 Neo-tech's Penis Size Chart. Click on the picture to enlarge.

Many hours of careful, meticulous research of pornographic films reveals that there is not a single penis in existence under 6 inches. The size of the human penis also appears to depends much on the gender. Females often have bigger penises than men, but they may be traps.

A school of thought has emerged that a large penis is irrelevant in satisfying the woman. Oddly, it is often women espousing this principle, as opposed to men tooting their own horn, as it were. Regarding the personal life of those women, it is as when the chairman of a political party touts the unusual sex or skin color of his candidate. If he had anything relevant to say, he wouldn't be talking about this. So women touting the irrelevance of penis size are conducting a lifelong awareness campaign to make themselves feel better about living with a two-incher.

Anyway, the orthodoxy with these women is that the underendowed man can compensate with body movements and his manliness (or in this case, lack thereof) to increase the pleasure of the woman. The unstated secret is that the compensations these body movements provide are nowhere near the power of a true penis. Other compensations involve the fingers and the wallet.

A smaller minority of women assert that a penis size of zero inches is sufficient to please them. This is an ideology of convenience, as dismissiveness about the penis relieves them of the need to work to become attractive.

A number of conditions affect the penis. This number is three. Two of the conditions are rare and minor:

The third condition is big and is covered below: 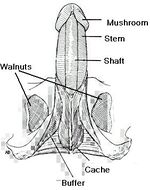 Twilight would suck this.

On rare but recurring occasions, blood rushes into the penis, giving it a briefly impressive size. The blood has to come from somewhere--probably the brain, based on consistent reports on the poor quality of decision-making that occurs in the few minutes after the start of an erection.

The conditions under which a person has an erection can help categorize the person:

Pen Island has nothing to do with penises at all.

Conversely, blood may drain from the penis and go back into the brain. The man temporarily acquires extreme intelligence. He might not be able to use this intelligence, however, because he may be so alarmed that his penis has shrunk and sometimes been sucked up into the abdominal cavity. At this point, he may be officially female, as he appears to have no penis and to suffer regular, non-lethal bleeding. However, continued clarity of thought would cast doubt on the classification.

Humans have used penis swords from the Gay Age onward. Men were proud of their weapons and they jousted and stabbed the women repeatedly. The oldest penises found to belong to the Mesozoic era of homo erectus around 60,000 BC. No older penises have been fossilized. However, Your Dad's penis is probably fossilized due to long disuse.

The construction of longer penises became possible in the late 3rd millennium BC in the Middle East, first in flesh, then in the hard skin. Penises longer than 8 inches were usually classified as boners, though traditional boners had to satisfy stringent conditions. Boners longer than 25 inches were rare and not practical during the Gay Age, as at longer lengths, boners would bend easily. It was not until the development of stronger materials (such as rubber) and improved accuracy that boners became practical for use.

The act of love, as seen through the eye of a penis.

The penis sword has evolved throughout the centuries, becoming a common household utensil throughout Europe. It was brought to the Americas in 1337 by Christopher Columbus, who reportedly said, "Bend down, ye savages, lest I give ye a hard dicking". 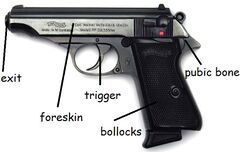 Because of these rules and regulations, we used a gun instead of a true image of a penis. Imagine a world without uncensored education...

The European penis sword effected the discipline to maintain slavery, with the European overlords holding out these erect, throbbing tools in a threatening way in response to any slave's attempt to flee. Eventually, the oppressed peoples developed their own penis swords, and in some cases even wielded swords longer than 2 feet.

To this day, the penis sword is a source of competition, usually unsheathed in events known as "dick waving contests" like the war in Iraq.

The "San Francisco swordfight" is a young man's event, much as medieval knights used to joust for the populace on a fair day. Despite occurring in a city where homosexuality is both a sacrament of the local Catholic diocese and a prerequisite for elected office, swordfighters prove that it's not gay for two men to play with each other's penis if you are doing so as a demonstration of machismo.

A motto of San Francisco for half a century has been, "Better living through chemistry," but recent developments in pharmacology have raised concerns that not all swordfights are straight. Contestants in city-sponsored swordfights are usually drug-tested before each bout to ensure that they are not using artificial enhancement to their swords. The fear is that young athletes would be tempted also to use "the juice" to gain an unnatural advantage, at a cost of their health in later life. 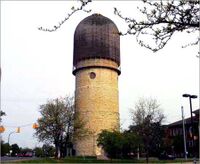 Build it right and you don't have to label it

As Sigmund Freud once noted, "sometimes a building is just a building." But the penis has been a recurring theme in the world's architecture.

Penises in the English language

"Penis" can be used as a "sentence enhancer" to express any extreme. Some examples are: Wow! That head shot was penile! or looking down your pants and realizing you have nothing there (given that you used to be a man), exclaiming Holy Penis! I have no penis!!!

The language "Donglish" consists entirely of saying "penis", and when translated to English, it is always "PENIS!" In some societies, it is customary to ring a cowbell whenever someone speaks Donglish.

For an organ so seminal to human existence, humans have an inordinate difficulty talking about the penis, and have invented numerous euphemisms for it. These can be based on the organ's form, function, or desired use.

Some people prefer the personalised approach and invent a pet name for their penis. Less imaginative people source names for their penis from a penis name generator.

Yiddish, for some reason, has evolved as a natural language for euphemisms for the penis.

In theory, any Yiddish word, or Yiddish-sounding word, can be used to refer to the male member--May we suggest "schlong"?--and everyone will just understand.

Global warming will affect penis size all over the world
Retrieved from "https://uncyclopedia.com/w/index.php?title=Penis&oldid=6135451"
Categories: