For those without comedic tastes, the "questionable parody" of this website called Wikipedia have an article about Weasel. 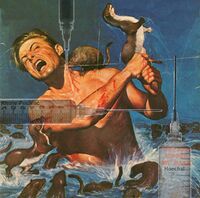 Weasels are ferocious predators that normally travel in packs of at least ten. The poor little girl in the water is surely doomed.

Weasels are the supreme evil in the animal kingdom. They were spawned by Lucifer as he was cast out of heaven for getting too weisenheimerly. Weasels made up the devil's elite cadré of demons, plaguing mankind with their devious antics. The first weasels were gigantic, wreaking havoc wherever they went. It was not until the day of Moses that he was able to vanquish the weasels in an ultimate showdown, and banish them from Israel for forty years. Weasels are characterized by their duplicitous wiles, and have dragged many a Christian soul to the depths of depravity and ruin. This ultimate evil is housed in a relatively cute, fluffy body, yet another proof of its malevolence. Weasels possess the unholy powers of flight, laser beams, fire breath, the ability to mis-quote Oscar Wilde, and skeletonizing a cow in less than a minute.

Weasels are rat bastards. Not to be confused with a ferret or stoat, weasels are vicious baby-eating devils that are ironically cute as a button. Despite how aesthetically pleasing they look, they will chase you down while you're hiking in the woods and God knows "what-else" they'll do to you and your family. Oscar Wilde once said, "An economy is weak without virtue, but weasels will kill you." Weasels are one of the most adored animals in the world, most certainly due to weasel propaganda, such as "Pop goes the Weasel" and the doped up weasel on Looney Toons, but make no mistake, a weasel is NOT your friend. You could waste time reading where weasels live, but rather, just know that they can be 'anywhere', at 'any time.' So don't let your ex-wife go out in the woods by her self unless you don't want her to come back, wink,wink.

Weasel is the name given to the rare spawn of individual known as Mitchell Barret. Not only has he got Weasel features but wherever he goes you can hear the echo of many a human... "WEASOOOOOOL" 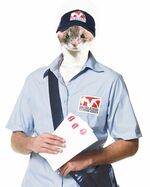 Weasels will not hesitate to seduce you, be you male or female. Do not give in, only ruin can come from copiating with weasels.

Weasels have been verified as being 23% more hilarious than ferrets, due to their collapsible skulls, sharp teeth, blood-red eyes that can stop a hooded cobra dead, and dry, well-timed wit that can devastate the insecure. They may be brown, reddish-brown, brown, red-brown, Michael Brown, brown, or tawny. Their underbellies are said to be yellow, but in reality, they are brown, which appears as kind of a brownish-white many, many shades lighter than brown.In rare cases, they may be white with blue eyes. (odd much)

Weasels are extra-ordinary and come in every shape and size, though no one has ever seen a fat weasel. This is perhaps because weasels are not American, or simply the fact that they exercise more than ten minutes a day and watch less than 15 minutes of television daily. Weasels enjoy watching commercials, pausing during television programs to craft forged legal documents until the next commercial break comes around.

It is important not to confuse weasels with stoats. If you confuse a weasel with a stoat, you will find yourself on the bitter end of litigation filed on behest of weasels from Weasel, Weasel, Weasel and Marmot, a firm specializing in weasel defamation. A simple way of remembering this is to repeat the following rhyme whilst camping:

“A weasel is weaselly wecognised whilst a stoat is stoatally different”

~ Oscar Wilde on on the difference between weasels and stoats 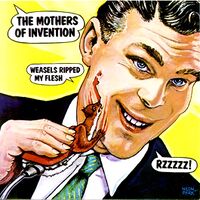 The face of drudgery.

Weasels are highly adaptable and suited to many environments, but prefer tubular spaces such as PVC tubing, bongs, car exhaust pipes and bottomless pits to dwell in. Urbanized weasels have taken a liking for streetcorners in heavily travelled areas, where they get beat shitless by teens with baseball bats.

Because their antics are valued for video-game design motion-capture techniques and their fur is sought for fake moustaches for Romanian women who can not grow one of their own, weasels have been the subjects of occasional efforts to breed them in captivity. Unfortunately, captive weasels tend to go pop during these efforts, and therefore breeding has not been entirely successful. Not a complete failure, mind you, but a near-complete failure. That's pretty much what I meant by "has not been entirely successful." Look, if I have to explain every-fucking-thing I do at night in bed, guess who's not going to write any more funny articles of yummy, yet very nutricious weasels, eh? Dick Cheney! That's right, the one who raised property taxes by 9%! 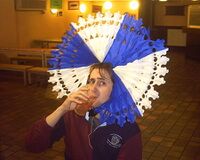 This sort of thing was once a common sight, but radioactive weasels are now banned from drinking in most pubs

Weasels are carnivorous and usually prey on small birds, mammals, Tootsie Rolls, prawn vindaloo, roquefort cheese, honey, and small pieces of "Weird Al" Yankovic's face. They have been known to supplement their diet with the occasional bowl of chicken soup and lokshen when available, though oddly enough it is customary for weasels to urinate into the soup before drinking it.

In Bishop's Stortford, there exists a tribe of weasels which live on nothing but kebabs and dodgy MDMA powder.

Weasels are timid and will normally run from humans, BUT SOMETIMES GET SEXUALLY AROUSED AND RAPE THEM, however, a cornered weasel will defend itself by shooting laser beams out of its eyes, hence the term "Lazer Weasel" see top. If this tactic fails, some weasels[which weasels?] will go "Pop", although since this typically results in the weasel's death it will only use this defense as a last resort. Spyrogyra employ a similar mechanism - if one views spyrogyra under a microscope and agitates the slide, they pop. However, there is little evidence that spyrogyra and weasels are related, except possibly through marriage.

Even then, it should be remembered that weasels are generally known for their vicious tempers and bloodlust. Often proved when a lone weasel has decimated an entire chicken coop, eggs and all while only carrying off a single chicken for its midnight snack. Said chicken will have its blood drained, which makes weasels similar to vampires. They are devious beings capable of mastering a wide range of weapons from french bread to chainsaw guns, and even bananas. Weasels are also incredibly stealthy, and kill quickly and silently, which makes them somewhat like ninjas. Thus we see that weasels are, in a sense, vampire-ninjas. They will head for the jugular, throat, back of the neck, windpipe, toes, feet, legs, torso, arms, fingers, face, eyes, head, or reproductive organs at blinding speed, claws unsheathed, eyes burning red, and razor sharp saber-teeth out and ready to slice through steel. Just check out this guy. [1]

But Can a Weasel Die?[edit]

The mortality of weasels has always been a matter of debate. It would stand to reason that a weasel, as with all other living things, would be subject to the menace of death, but researchers at Oxford University have failed to identify any incident in history of a weasel dying. The idea of "weasel immortality" has been furthered by controlled experiments exposing weasels to extreme conditions. In one study, both a weasel and an otter were subjected to temperatures of up to 1200° (can't remember if it was Celsius or Fahrenheit, but really hot all the same) inside pressure cookers for two hours. Upon completion of the experiment, the otter came out a bloody cesspool of mushy organs, but the weasel came out in-tact, smiling and performing the river-dance. In another notable case, a weasel was placed inside a BlendTec blender in "Will It Blend?", a popular YouTube series in which the BlendTec CEO demonstrates the effectiveness of his company's blender by attempting to blend objects seemingly impossible to do so. Despite turning the blender onto its highest setting, it erupted into a bright, billowing orange flame. Emerging from the flame was the weasel, unharmed but with fury in its beady eyes and brandishing its horrid claws. The CEO fled unharmed, but the company issued an apology for misrepresenting its "infallible" blender and subsequently filed for bankruptcy. We may never know for certain whether or not a weasel can be killed, much less die, but one thing is for certain--don't fuck with a weasel.

Weasels, as do otters, love Skittles! If you happen upon a weasel, offer it some Skittles--but if you don't have any, it's best to just run. Don't bother playing dead, because weasels don't fall for that shit. Carry an ax as well, to sever its head as it clings its little greedy, but ever-so-cute claws on you. Whatever you do though, DO NOT blow on it's face. The Weasel Appropriations Act of 2009 (WAA-09) prohibits us from knowing why, but it's strictly forbidden.

The weasel was ranked 3rd place as the most murderous animal.

The neutrality of this article or section may be compromised by "weasel words."

You can help Uncyclopedia by improving weasel-worded statements

Weasels communicate with one another in an elaborate language consisting of squeaks, growls, 1337 and written depositions. When at a loss for words, weasels subpoena each other for conversation, or quote freely from Encino Man. They have also been known to utilise Second World War field radios.