"I can't understand what you are saying. I'm sorry, I don't speak Egyptian. Do any of you speak Hebrew? No? How about Mosesish? Anyone? Oy Vey! I tell you what, I'll just take my people and go… okay?"

Moses to Pharaoh in their vaudeville act, A Funny Thing Happened on the Way to the Desert… 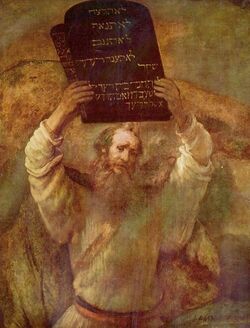 "Right, who wants the next autograph?"

For those without comedic tastes, the self-proclaimed experts at Wikipedia think they have an article very remotely related to Moses.

Moses was a Hebrewian fiction writer, actor and lawgiver. He was perhaps best known for writing the first five volumes of the best-selling book, The Bible and for being the actor who played himself in the film version of The Bible, "The Bible: The Musical", and "The Bible II: Electric Boogaloo". Obsessed with letting his people go, he later exposed them to God and trapped them in the laws of religion for the rest of their lives.

Moses was born into a Hebrew family, but was put up for adoption because laws against the bearing of male children had been passed after the Pharaoh had seen people washing their babies in the River Nile. (He thought that it was disgusting and wondered why they didn't use royal baths like he did.)

Baby Moses was sent to an adoption centre but didn't take to his new life. After years of causing much trouble at the adoption centre, he was finally adopted by a rich Egyptian family who thought that they could turn this young tearaway into a well-mannered young man.

The Death of a Slave

How they failed: Moses took drugs, stayed out all night sleeping with women and early morning swimming in the Nile. In an attempt to set Moses straight, a slave of the family tried to persuade Moses to stay in and do his homework[1].

Moses, being the good hearted young man that he was, killed the slave, giving him no other option but to flee in order to escape the law. However, as the Pharaoh's personal police force investigated the crime, it was revealed that the slave had been sleeping with one of Pharaoh's wives and would have been killed anyway. Pharaoh could have phoned Moses to tell him that he had been cleared of all charges, but Pharaoh didn't have Moses' number, probably because the phone didn't exist yet, let alone Moses having the time to register a number.

When Moses saw the Burning Bush, he exclaimed, "What the hell are you doing, Sheepy? Why aren't you getting me some water?! It's already too hot without that Burning Bush, and I'm getting irritated by inferior animals not pulling their weight."

Moses fled to live in a youth hostel, where he stayed until the completion of the first five volumes of his book The Bible. The Bible was a choose your own adventure novel which told the tale of Moses and a divine Lord called God.

While it is commonly believed that Moses was the only writer of these volumes, there is evidence that he collaborated with his room mate, Hobab. The probable reason for Moses not including Hobab in the credits was that Hobab wanted 75% of the royalties, and if Moses didn't give it to him, he would burn the volumes at the sacrificial book burning.

This really spoke to Moses, and in God's name he decided that he couldn't trust anyone, and decided to complete the work on his own[2].

Soon after Moses released the book onto the market, Steven Spielberg decided that he wanted to venture out and direct a musical based on The Bible. Moses played himself and was heavily criticised for this before the first performance. The idea was to have Moses play different personas of himself, basing them on the 10 plagues that plagued Egypt.

Here is an extract from the play:

Pharaoh: No, I'm not scared.

This was a part of Act IX where the plague was total darkness. This was in fact the shortest scene because the plague was very unsuccessful, mainly because people welcomed it with open arms. It just gave people extended night time, allowing them to sleep longer and stopped them from having to get up really early to work on that Pyramid in the boiling hot sun. It must have caused huge problems for the people of Egypt.

The Egyptians had been chasing the slaves for many days and to pass the Red Sea, Moses led his people around. The Egyptians, stunned by this feat of tactical brilliance, tried to go through the sea. They drowned.

The Musical was a complete success and allowed Moses to retire from back-breaking work and become a politician.

Life as a Politician

Moses took office on the top of Mount Sinai, where he used God as an advisor when he was deciding what was going to happen to his people.

During his new job, he only needed to make one little decision: decide the laws that would govern all mankind for the rest of time. So he came upon to God, and the conversation was reported as follows.

God: You are to lead the Jews unto Israel and deliver upon them these sacred commandments to which I endow upon you!

Moses: Can I take a pass on that one?

Moses: Alright, alright! You're the boss, but can I expect a carefree life after this? 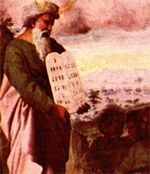 "And when I said to God, 'Look, what do you want me to do about the failing crime policy?' , he presented me with these. I'm not sure if he wants to hit them over the head with them or what. Does anyone know?"

When God advised Moses on what the Ten Commandments should be, he was baffled.

It would have been impossible to have followers if he told them the real commandments, so he secretly changed them to the commandments we know and love today.

In order to change the commandments so that at least someone could live their lives by them, he crawled round the side of Mount Sinai so that he was out of view from his followers and said, "Right Moses, come on, think! If I can just get some harsh rules down, I can change them later... Ok got one, Thou shalt not steal, I'll definitely get rid of that one when we come to our destination... stealing will come in handy."

Scribing down fifteen rules onto three tablets of stone, Moses quickly rushed around to the base of Sinai and proclaimed the following to his people:

"Hear, oh Israel! The LORD, your god, has granted unto you these fifteen..."