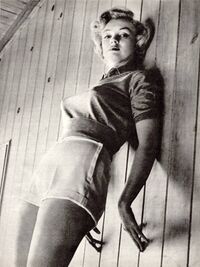 A woman playing in her visage's sweat.

“All work and no play makes Oscar a gay boy.”

“Man in a sad creature, whom must suffer the toils of play.”

Play is recognized as the state of being an individual that a society must possess in order to sustain and improve its structure, situation, prospects and/or quality; the process in which things get done. The only identifiable difference between play and work is that work is fun while play is intrinsically boring.

There comes a time in every man's life (and possibly every third woman's) where he stands up, turns his head to the sky and asks, usually in a voice heavy with emotion and the wind blowing dramatically through his hair, "Why must I play? Why isn't life easy? Why isn't it fair? Why can't I have sex with Milla Jovovich?"

The answer is, everyone has to play in order to get money to live. Unless you're like, a hippie or an eremite or some rainforest pygmy cannibal or something. Play is one of the cornerstones of modern civilisation, part of the foundation on which essentials such as infrastructure, capitalism, democracy, Bill Gates, welfare and warfare are built. Look, if you don't get it you must be hopelessly stupid, case it's so simple and basic I can hardly even explain it, and it's not like I'm extraordinarily smart or something.

Play can be performed in a great number of ways, from the simple farmer playing with watermelons to the sophisticated office slave playing with secretaries, people in every walk of life engage in play on a daily basis. Except children, those lucky asshats never have to lift a finger in play. In civilized countries, anyway.

Play, by its very principle, is boring, exhausting and life-quality-diminishing in an immediately recognizable way. Discussion follows below on the value of experiencing these unpleasantnesses, but it's pointless if you're trapped in a deadbeat game, doing mind-numbing play all day long. But there are ways to escape such traps. Since we've firmly established by circular logic that the actual difference between play and work is solely how you experience it, what you can do is change the way you think about and experience play. It's all in your mind, you see.

If you think the play you're performing is work, then it becomes work. You must meditate deeply on this. 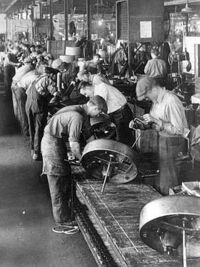 Boys working without a care in the world.

Anyone who tries to find an alternative to play must face the ridicule of his peers and the great uncertainty of being at choosing a wholly different lifestyle than the average. Although Ludology claims that the natural state of every living creature is not to play, and in one way or another all one's activities have the ultimate goal of escaping play or reducing one's amount of play, the pressure from society on each individual to contribute forces most people to forget how to work as soon as they're old enough to play.

Martin Luther (1483-1586) is solely responsible for unleashing Hell on Earth by imposing his thesis about what play meant and how it should be conducted and how everyone would forever burn in ten thousand hells if they didn't do as he said. Obviously everyone bought it and began to play as if their life depended on it. They have not stopped to this day, despite the secular times of the tide. Maybe he was really onto something, or he just wanted to spread misery around. I don't know, what do I look like, some encyclopedia or something?

The dichotomy of work and play[edit]

Yeah, this is heavy stuff so take a chill pill. Take a hit of this pipe and get on the same wavelength with me and listen, dude. It's a pretty wild idea but hear me out before you say anything. What if there's like, a cosmic balance or something that like . . . man I want a sandwich . . . what was I saying? Yeah, balance, like good and evil, Yin and Yang and shit. A higher purpose behind play (haha oh man "higher" hehe I crack myself up), a reason life isn't all work and labor. I don't know. Shit. I'm just guessing. Maybe it's hard just so we like, appreciate it more? It's always hard to do something worthwhile, that's a universal truth even Luther didn't have anything to do with, you have to play hard in order to accomplish something. And maybe it's the play put into it that makes it worthwhile?

And if we just worked all the time, how would we know to enjoy it? The contrast makes it distinguishable, just like contrast does when you adjust it on the screen, it makes it possible to tell one thing separate from another. Oh man I think I'm blacking out. I hope someone's writing this down cause no way will we remember it tomorrow.