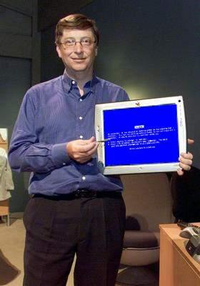 Bill demonstrating the latest version of the BSoD in Windows 10.

“How can a guy with that much money not afford contacts?”

William Henry "Bill" Gates III.I (born October 31, 1955) is an obsolete, closed-source x86 microprocessor with 640K of L1 cache which runs MS-DOS. He is extremely rich and one of the biggest nerds ever; this guy is such a nerd that he started his own personal computer company, Microsoft, back in 1975 of which he was the "CEO" (or "head nerd") until 2000, and he is also the company's largest shareholder with 95% of the stock. As of 2022, he is noted as being the fourth-richest man alive, with an estimated net worth of $∞. That's expected to diminish once he terminates his marriage to Melinda without a full system reboot.

Aside from being very rich and nerdy, Gates is also a philanthropist. Over the past two decades, he has donated over $77.3 billion[1] to various organizations, including the League of Nerdlingers and the United Negro College Fund. In 2005, People magazine named him "Unsexiest Nerd Alive", and later that same year, he was voted #9 on Rolling Stone's list of the 50 Greatest Inventors, beating out the guy who invented the doorbell and the guy who invented the machine that puts those "Dole" stickers on bananas.

“The obvious mathematical breakthrough would be development of an easy way to factor large prime numbers.”

Gates was born in Seattle, Washington to William H. Gates Jr. and Mary Maxwell Gates. Both of his parents were very successful in their own right, his father being a lawyer and his mother being an accomplished bank robber. He had some siblings, but nobody cares about them. He attended the most prestigious preparatory school in Washington as a youth, where he developed his interest in computers. As a child, Gates was also in the Boy Scouts, where he achieved the second-highest rank, "Gateskeeper".

Bill got an unimpressive 420 on his SATs but nevertheless enrolled at Harvard University in 1973, intending to get a pre-law degree. While at Harvard, he met his future business partner/wacky sidekick/pet Steve "Developers, Developers, Developers" Balmer. Together, they co-authored and published a 780-page review paper on Star Trek: The Animated Series, calling it a "cardbord-cutout-looking recycled disappointment that's so overtly-counterculture that furries are considered normal in the future." 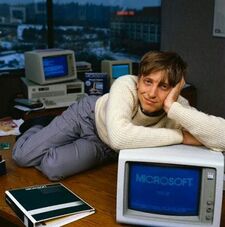 Bill Gates discovers that women, unlike computers, do not accept 3.5" floppies. Notice the Macintosh computer to the behind-right of him.

“No one will ever need more than 640K of memory for a personal computer.”

~ Bill Gates on memory during a 1992 IBM meeting

Gates left Harvard to demonstrate one of his prototype BASIC interpreters for Micro Instrumentation and Telemetry Systems, a new computer company that had launched one of the first microcomputers, HAL 9000. After a successful demonstration and product launch, Gates co-founded Microsoft in 1975 with two other guys, to the dismay of Earth. Of the three who founded Microsoft, one of them died, leaving all of his shares to Paul Allen, who in turn got cancer and handed over his 97% of the shares to Gates. That is the truth of how Bill Gates, because he got it from a sick friend who inherited a ton of shares from a dead guy, became the arbitrary leader of Microsoft.

For those without comedic tastes, the so-called experts at Wikipedia have an article about Bill Gates.

~ Bill Gates on your computer usage

In 1981, IBM awarded a contract to Microsoft. In 1985, Microsoft released its first retail version of Microsoft Windows, originally a graphical extension for its pathetic MS-DOS operating system. In 1989, Microsoft introduced its most sinister office product, Microsoft Office, which was a bundle of wannabe office tools, such as Microsoft Word, Microsoft Excel, Microsoft Coffee, and Microsoft Stapler. In 1995, Microsoft launched Windows 95, arguably the definitive and most A E S T H E T I C version of Windows; it set the template for all future versions. The new version of their operating system boasted such new features as Internet Explorer, more memory leaks, and faster loading of the BSoD for the Intel 386 processor, and sold over 10,000,000 copies in two days. Microsoft's success continued from there.

In 2000, Gates resigned as Microsoft's CEO and handed the keys over to his pet Steve "Developers" Ballmer, who proceeded to crash the car within seven years with Windows Vista. In 2014, he stepped down as Microsoft's .exe chairman at the board of directors, and in 2020 left the board entirely.

An early logo for Microsoft.

~ Bill Gates on accusations of monopoly

In 1998, Gates started a game of Monopoly with Sun Microsystems chairman Scott McNealy and Netscape CEO Jim Clark. Gates quickly took control of Boardwalk and Park Place and from then on, dominated the game, quickly driving Clark to bankruptcy. According to McNealy and Clark, Gates repeatedly engaged in shady business dealings throughout the game, such as forcing them to buy copies of Internet Explorer whenever they landed on his properties, making interest-free loans to himself while acting as banker, and arguing that McNealy and Clark shouldn't get any money when they landed on free parking since it wasn't in the official rule book, even though everyone always plays that way. Also, he took the little hat piece even though Jim Clark always plays the little hat and even called it first.

An anti-trust case was filed against Gates. The initial ruling found against Microsoft and ordered him to surrender his Death Star and to sell off either Tatooine or Endor, and to go to jail, directly to jail, without passing Go or collecting 200 dollars for his T13 sand speeder. However, the ruling was later reversed, because Gates is filthy rich and so are his lawyers.

“Personally, I have at least forty-nine of these I know about.”

Gates is a rich motherfucker. Perhaps you don't realize just how rich of a motherfucker he is.[2] You should be wearing a monocle while reading this. If you had a penny for every thousand dollars this filthy rich digital bitch has you'd be decently rich yourself, albeit nowhere near as rich as Bill Gates. It's true that only twelve nations in the world are richer than Gates; doubt him and he'll crush you with his 1,000 gigapound wallet, then he'll smack you with an Xbox One and take a dump on your head. Bill Gates can stand on his wallet and be taller than Godzilla.

Also, keep in mind that Gates was, as of 2022, declared to be officially richer than God. As a matter of fact, from the moment that you started reading this article up to now, he has become exactly $2,343,645.55 richer than God; that means he has hired another 100,034,090 rent boys. Now stop reading, the motherfucker is getting richer. And richer.

Gates has copyright on the definite article "rich" in nine European languages; whenever this word is employed in print, song lyric, or recorded speech, the Microsoft chief receives a royalty of $0.95. In an interview with Rich Weekly, he stated: "I like to think that for every blue screen the Windows system has shown, I earn $0.01"; some have argued that this, along with his copyright on the word "rich", is where his wealth came from. 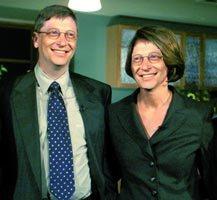 Bill and his wife, Melinda.

~ Bill Gates on his favorite color

One knows nothing about Bill Gates until one learns the sad story of his personal life. Gates married Melinda French of Dallas, Texas in 1994, right before he became a billionaire;[3] they had three little nerds together. In 2021, it was announced that Bill and Ted Melinda's great marital adventure was over. The couple will divorce, and Bill will lose half his fortune to Melinda. She could possibly go into business with Jeff Bezos's former wife MacKenzie Scott, and create the first all-women multi-billionaire tech power couple.

Gates's house in Melinda Medina, Washington is one of the most expensive houses in the world, and is a modern 21st century earth-sheltered home in the side of a hill made of solid gold overlooking Lake Washington. According to King County public records, as of 2022, the total assessed value of the property (land and house) is $toomuchforyoutobuy, and the annual property tax is just under $1,600. Gates's home sofa is estimated to contain between eight and ten million dollars in lost change, along with some twenty pounds of discarded Cheez Doodles, the billionaire's favorite snack.

Some of Gates's favorite hobbies include ironing his money, listening to Weezer of which he is a huge fan, tweaking amateur HAM radios (cosign: Big Willy), swimming naked in a pool of Xbox Ones, yelling at Steve Ballmer to fetch him four Diet Cokes per day, painting pictures of Linus Torvalds in various death scenes using MS Paint, and watching what you do online, as stated in the Windows End User License Agreement. Gates wears a $90 million-dollar exoskeleton that was engineered from a single piece of Strontium-90. He also sports a titanium prosthetic face mask, the most expensive in history, whilst he tells the rest of the world's population to get vaccinated instead of giving them their own cool TiMasks. Coronavirus is routinely massaged onto the Microsoft supremo's mask to deter conspiracy theorists who wish to snatch it off. 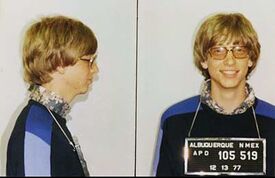 Gates's mugshot shortly after being wrongly arrested for the death of his own brother.

“Now delete the file that makes it all work...”

~ Bill Gates on his brother

Bill's younger brother, Sam, was one of the first employees of Microsoft. While his brother worked away his nights on creating the first computer, Sam spent his time playing text adventures on their father's Sinclair. On a fateful night in 1993, Bill came into the room while Sam was doing this, and thereby discovered that the box he had previously thought to be a plaque commemorating the end of the Civil War was in fact a computer which had therefore already been invented, rendering his hard work of ten years completely useless.

Enraged, Bill summoned his Hand Cursor of Doom and deleted Sam's System32 folder on the spot. He buried Sam's body, and later claimed that he had gone missing while they were on a hiking trip. Their mother Mary actually found Sam's corpse the next day since his arm was sticking out from the ground between the radish patches in the garden. He was given a proper Catholic burial which, as very few people know, involves posting an ad the next day stating that the deceased person has gone missing.

An investigation by police led to the arrest of Gates for the murder of his own brother. During the trial, in an event shrouded in mystery, an odd transaction of money from Gates's checking account went to the account of the presiding judge, Judge Hawthorne of the Washington Courts, and Gates was subsequently dismissed of all charges and the death was ruled as a suicide. Gates has since then openly confessed to killing him; when Windows 98 came out, Bill named the Microsoft Sam computerized voice in honor of his brother, though Sam would've probably preferred if Bill simply hadn't killed him.

Gates wrote his autobiography, Things I Can't Buy, in 2000. The book currently holds the record for world's shortest book, and it reached number one on the book charts and stubbornly refused to move, even after heartfelt talks with its mother and an offer of a healthy retirement sum. It is reported that the book's popularity was mainly due to Bill Gates himself buying out every copy as it was printed. 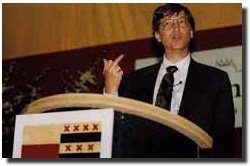