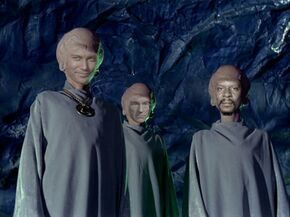 The studio rejected the pilot because, although an unemotional alien speaking perfect English was believable, a female command officer was not.

Star Trek was a government-mandated Pavlovian conditioning method to keep left-wing radicals and other kooks locked in their homes, staring at an electron gun with glass in front of it. 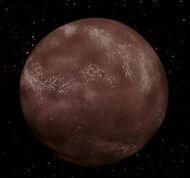 Roddenberry's vision was that all other habitable planets would be incredibly bland-looking.

Gene Roddenberry (Star Trek's creator) hated the planet Earth after falling off his bike onto it, badly grazing a knee. "The only reason every damn television series is set on this damn planet is because of institutional racism — nothing more, nothing less," he commented. His words here spoken by an actor in a weak attempt to conceal inebriation at the hands of Klingon Mind Lager. "But it's ridiculous; there's billions of planets out there and only one of them is Earth. Unless of course you count parallel universes, which I do ... but that's just a hobby, and to be honest I've lost count."

Roddenberry also despised hats. Have you ever noticed that no one in the federation wears one except while disguised on a backwards planet plagued by social ills and long-winded speeches? Not even when they're trapped on an ice planet and freezing to death do you see crewmen wearing hats. This is because Gene Roddenberry realized hats are the symbol both of corrupt monarchies and of organized religions. (Crowns, turbans, bicornes, mitres, yamakae, yellow hats, black hats — all corrupting influences on a scientifically advanced utopia of regulation sweaters and miniskirts — have absolutely nothing to do with baseball caps, nor that day he fell.)

Roddenberry set to work, asking his mother if he was allowed to create a television series not set on Earth and not in the present day. Her answer was apparently "Yes," as long as it wasn't on a Wednesday after 3:00 — that's when she gets her hair done by Ms. Haddison around the corner. With next Wednesday out of the picture Roddenberry set the show in the mid-twenty-third century — a century that hasn't, even to this day, happened.

For those without comedic tastes, the so-called experts at Wikipedia think they have an article about Star Trek.

The jump from the little glass screen to the big silver screen was inevitable, as money just keeps being printed and movie studios simply have a duty to scoop it up. Movies were made using the original cast, the "Next Generation", and inexplicable combinations of the two. The key for the consumer is identical to that for new versions of Microsoft Windows: Every other one is decent.