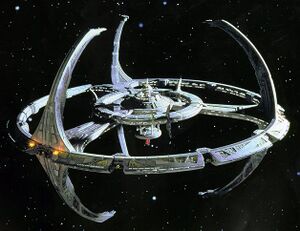 The series production team attempts to out-do the Enterprise. Not shown: Success.

Star Trek: Deep Sleep Nine was a Star Trek spinoff that ran for two and then five seasons on Fox TV. The series concentrated mainly on character development and complex story arcs that involved war, money, religious hokum, war, xenophobia, a hostile puddle of orange goo and war. It is thought (by who?) that Deep Space Nine paved the way for the kind of serialized storytelling that is so fucking annoying these days. The structure of the later seasons was such that if fans missed a single episode, the universe itself would tear at the waistband and exhibit its flabby backside for the world to see.

More sinister than that, Deep Space Nine has recently been discovered to be a key part of a plot to "get the people into space." Network executives have confirmed that the character of Benjamin Sisko was meant to inspire black people to leave behind their miserable lives on Earth and go in search of opportunity elsewhere in the universe.

As the station was located in deep space, Federation officials creatively renamed it "Deep Space Nine," which they vastly preferred to the station's former name, Harlem.

A frequently featured location on the series was the Promenade, a hotbed of prostitution and the trafficking of drugs known as "jumja sticks." Sisko made numerous attempts to crack down on the crime wave on the station, but was routinely greeted with resounding cries of "Down with the HECKING Federals!" 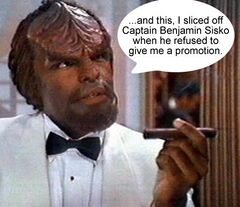 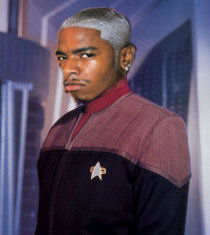 Jadzia and Sisko discover the wormhole. Attempts are made to "boldly go where no one has before" in other people' galactic backyard, referred to as the "Gamma Quadrant". This leads to war. The Cardassians try to annex Federation territories. This leads to war. The Klingons enjoy fighting glorious battles. This also leads to war. The evil Dominion wants to take over. War. Everyone joins the war. Billions of people die. The war ends.

There was also a plot arc dealing with the serious subject of caffeine addiction. In one notable episode, entitled "Sisko Goes Cold Turkey," all the raktajino on the station is drunk by the Pah Wraiths. Sisko goes into deep withdrawal until replenishments can be provided by Starfleet Command.

On one occasion, Sisko finally did manage to successfully break his addiction to space-coffee, only to discover that Deep Space Nine was a figment of his own space-coffee-fuelled hallucinations, and he was a penniless writer living entirely on baked beans and punches to the face from passing policemen. Unable to cope with the realization that he was, in fact, a truly terrible writer, and the reason he was poor was because the best he could come up with was some half-assessed nonsense about a space-station (which was so appallingly badly-written and hackneyed that it caused any books it appeared in to be burnt with pure, cleansing fire), he retreated back into his space-coffee-hallucinations, never to venture back into the frightening world of reality again. Much like TV producers.

Interestingly enough, that whole realization episode was later ripped off by Joss Whedon and the scooby gang. The episode was shockingly titled, "Buffy Goes Cold Turkey" (but to be fair, who really watches Buffy?). In the Final episode, the Dominion War ends, Sisko becomes an omnipotent being, and Worf reminisces about everything except his beloved dead wife.

Also, Bashir would occasionally strut around the station, get kidnapped, and/or get embroiled in conspiracies about oil and date prices. The show had to have some plot. Plot is found exclusively at medical conferences and on vacation planets.

The Deep Space Nine crew meet their doom in the final episode to the comet that is always in the opening credits.

Tired of dealing with the writers' strikes that arose during previous Star Trek series, the network opted to kidnap a group of forty used car salesman from Kansas. These men were held in a bunker several hundred meters below the Earth's surface, where they were force-fed hallucinogenic mushrooms and whipped by a large man in tights, who hated his job but understood its importance. Under these harsh and rather extreme conditions, the writers produced episodes like "One Little Ship," in which the warship Defiant, along with its crew, shrinks and gets stuck in a pile of melted marshmellow. Rick Moranis guest-stars as Fleet Admiral Szalinski.

Writer Ron Moore would later go on to write the worst piece of 'critical fiction' that HBO ever lynched, Carnivale, which over 2 million idiots with a bend for thinking obsessively researched for the duration of it's run. After that, we lost track of him.

Place in the Star Trek canon[edit]

Everyone knows that Star Trek is a religion. As the younger brother of Star Trek: The Next Generation, what valuable lessons can DS9 teach the fanatical believer?