~ Tribble on being delicious 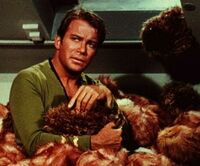 Is this you? Then, holy shit! You're James T. Kirk!

Tribbles on the bridge, tribbles filling up the sickbay, tribbles clogging up Engineering and jamming the transporter. Every day, it seems that some hapless ensign on some unsuspecting starship is captivated by the seemingly benign purr of one of these living hairballs and the desperate merchant's low, low price. Little does he know that his new pet is pregnant - born pregnant, always pregnant, and poised to infest his starship with thousands of its descendants the second it sets its absent feet on the bridge.

And now, here you are, sitting waist-deep in tribbles and brushing them off your bridge station as you frantically scan the databases for a way to exterminate the buggers, which are looking less cute by the second. If this is you, fear not; the search is over.

Do you just know that there's got to be a better way to do it than pouring them into space or beaming them onto a Klingon ship? Are you the creative type, at least the hungry type? Do you think you are out of food just because the tribbles ate it all? Do you and your crew want to be rid of the ubiquitous balls of fuzz, but feel bad about all of those bite-sized creatures going to waste? Then you have come to the right place to learn How to Cook a Tribble. 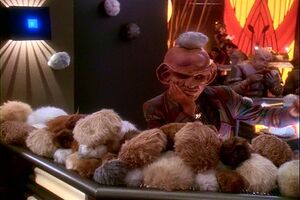 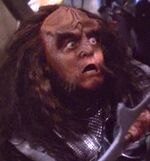 "For the love of Kahless, CLEAR OUR SHIP OF THESE VERMIN!"

In most cases, the need for eating tribbles only arises when they have bred themselves to dangerous numbers aboard a closed starship, void of natural predators. Controlled specimens are friendly to most other species in the known galaxy and make better pets than food. However, careful chefs who wish to obtain tribbles for culinary purposes need not go far to purchase them. Any sufficiently populated or under-regulated station will be rife with gift shop vendors and overrun owners eager for you to take any number of tribbles off their hands - the more, the better. The best thing about tribbles is that they regulate their own prices.

For those who would rather experience the thrill of hunting one's own tribbles or those whose ship is already full of them, see below. 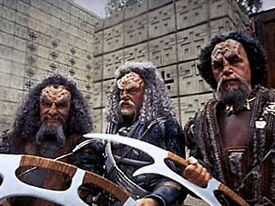 These Klingons are going the extra mile. You can put away the bat'leths, men.

Pick 'em up and put them in the bag; no weapons required. The mouths of the little buggers may be toothier than their fluffy exterior suggests, but without limbs, there is only so much they can do to resist capture. Always pick up fewer tribbles than you need for your desired dish, how much fewer depending on how much time you expect to pass before you get to the kitchen. Hell; if you're really feeling lazy, fill the bag with food and just drop in one. They reproduce faster than you think. Just be prepared to serve as many tribbles as may fit in your bag.

For a higher quality dish, it is recommended to resist the temptation to kill the tribbles upon hunting. Waiting until you are over the kitchen sink to clean the tribbles will ensure that the meat is as fresh as possible. We mean you, Mister Woof. An example of what not to do is provided by the Klingons, in their temporary extermination of the tribble species from their home planet in the 23rd century known colloquially as the Great Tribble Hunt. The armored warriors hacked their path through the tribble-carpeted landscape with all manner of bat'leths, sabers, disruptors, artillery and hockey sticks. However, when the warriors were finished with their deed and ready to settle down for a feast after a long day of bloodshed, they found most of the vanquished nigh inedible, the exception being those lightly browned by a lucky energy weapon. This crunchy treat became known among Klingon chefs as "ch'ips".

In conclusion, even if you forget these simple instructions while hunting in the field, just remember: don't be a Klingon.

Underside of the tribble. Watch those fingers!

As many as there are tribbles, there are recipies - their size and resemblance in flavor to chicken makes them among the most versatile of white meats, workable for any occasion from dinner parties with interplanetary royalty to movie night on the bridge.

Regardless of how you wish to prepare your tribble or tribbles, do not bother to remove the tribble's infamous fur coat, as without it, there is not much left to eat. For those who dislike the furry texture, the latest, one hundred seventy-fifth edition of The Joy of Cooking suggests battered recipies or those in which the tribbles are stewed with other ingredients.

When working with live tribbles, take care to avoid the mouth or wear protective gloves. While generally non-agressive, when threatened, tribbles will bite, and in large swarms (known as "murders"), have been known to strip medium-sized targs down to the bones in less than five minutes. Klingon cooks, as natural enemies to the tribble, are in the greatest danger from the tribble's many-barbed jaws and should additionally protect their faces, or better yet, have someone else do the job. In this case, when we say don't be a Klingon, we really mean it.

Perfect for picnics and late nights on the bridge.

Increase oil temperature to 464 Kelvin. Sift 1 1/2 cups flour into a bowl, then whisk with bloodwine until thoroughly combined. Add salt to batter and stir.

Sprinkle tribbles on all sides with 3/4 teaspoon salt and 1/4 teaspoon pepper, then cover in remaining 1/2 cup flour. Coat tribbles in batter and oil in succession, then fry, turning over once per minute for five minutes or until golden and thoroughly cooked (test consistency with a utensil such as a spork). Transfer finished tribbles to a baking sheet and keep warm until served. If tribbles are still moving, they are not finished.

Season with salt and/or other accompaniments to taste.

A fact largely unknown until discovered by accident in kitchens across the galaxy is what happens to whole tribbles during prolonged exposure to high heat. At the right temperature, tribbles will pressurize and explode in an effect indistinguishable in appearance and sound from giant kernels of popcorn.

This property of the common tribble was first documented in an attempt to relocate a large population of tribbles to equatorial Vulcan during midsummer on the arid planet. Rehabilitation was a complete yet delicious failure.

“Captain's log; additional entry. Our position: the surface of my home planet, Vulcan. Medical scans are not necessary to observe that the response of the relocated tribbles to their new environment has been fatal. Upon contact with the planet's surface, the tribbles appear to have been heated beyond the boiling point of dihydrogen monoxide, at which point the resulting internal pressure caused their exterior to rupture and expose a layer of white polymer of the consistency of dense foam. Lieutenant Atterton reports that they taste like a smaller delicacy he recalls from his birthplace. The Prime Directive beyond logical salvageability, I am disinterested in this frivolity.”

What was then a disaster may easily be recreated at home to create an ideal party snack.

Heat sugar over medium heat, stirring with a fork or whisk. When sugar is melted, allow to cook until caramel brown, occasionally swirling pot to keep the mixture evenly distributed. Reduce heat and stir in butter, pecans, vinegar, and salt. When butter is melted, add tribbles and stir to coat. Allow finished tribbles to cool on a lined baking sheet. If tribbles are still moving, alert security.

Warning: Do not microwave whole tribbles.

Set tribbles on a plate and salt liberally. Cook a few at a time over preheated and oiled grill or, to avoid citations, a Starfleet-approved substitute. To test for doneness, perform a temperature scan with tricorder. The internal temperature should scan as 345 Kelvin when medium. Cook to taste.

Arrange onions, lettuce and tomatoes on an attractive plate when ready to serve, assuming live tribbles have not spread to the china. If the infestation has progressed this far, use a faster recipe.

Lightly brush the inside of the hamburger buns with butter, if desired, before adding tribbles, toppings and desired condiments.