This arcane logo suggests that the spork was invented by one of the Secret Societies that control the United States, behind the scenes.

For the religious among us who choose to believe lies, the so-called experts at Wikipedia have an article very remotely related to Spork.

Sporks are the bastard-child of a spoon and a fork and are useful as both. It is understood that they are the result of a steamy affair involving the aforementioned utensils, which have since parted ways as a result of family oppression, though the spork has thrived freely in households across several countries. Being an excellent device for eye-scraping, the spork is most often used as a device for stuffing food into mouths. A synonym for spork is "Great One".

They might take over the world one day. Everything will be peaceful then. Just you wait. Not only are they lovable and cute, but they can cut you in four places at once if you ever try to mess with them. Don't. They are very pleasant because they are natural optimists. Sporks are a marvelous invention. The Foon is their mortal enemy. It is an inverted, three-pronged spork, the retarded cousin that never quite made the cut for the school football team. If you ever see one, crush it immediately, for your own safety and that of the spork nation, Sporkland. Sporks celebrate National Spork Day every August 15. It is a "commemoration of the awesomeness of the spork and those who support it". Other spork dates are: Spork Day (Northern Hemisphere) - August 15th Spork Day (Southern Hemisphere) - July 11th Sporktober fest - 13th to the 19th October. Sporks are also a favored weapon of Light Yagami - or, at least, an actor portraying him.

The Spork Fossils of Lower Bulgaria[edit]

Here is a computer generated image of what scientists believe to be a primitive Grue portraying its use of sporks. The astute will notice that it is actually holding a foon, but this, as the astuter will quickly realize, is because all CGIs and cartoons portray people, animals, etc. with one or more less digits than they of right ought to possess.

Back in 1824, while on an excavation of Lower Bulgaria, the mighty Spork fossils were first found. From these initial fossils, TV Scientologists at the time were able to, almost correctly, conclude that the Spork is the ancestor to both the fork and the spoon which have been domesticated for about 5 days now.

The discoverer of this pseudo miracle is believed to have been none other than Margaret Thatcher, though it could have been her evil clone from the FuturePast. These little details are a little sketchy at best. What is known though is that she single handedly dug up the whole of Lower Bulgaria by herself using only her handbag and her husband Dennis Thatcher.

Unfortunately, these fossils have since disappeared from the Interplanetary Museum of Unnatural Pseudophysicists Historical Museumy Thing during its name change from the British National History Museum in 1910 while the fish were playing the trumpets. Although nothing can be proven, the Crimologists all believe that the culprits were a bunch of spoon enthusiasts who don't believe evolution should be taught in schools. 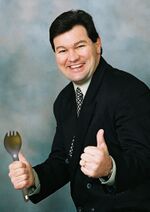 This guy sure loves his Spork.

S.P.O.R.K, or Shock Protesters of RaveKraze, originated in the early seventies' RaveKraze movement. Disillusioned by the lack of interest in their movement and protests, a group of 14 people formed S.P.O.R.K with the goal of getting their message through by performing dangerous and shocking publicity stunts. The first sign of their existence was April 14th 1974, when the people arriving at work in the morning were met by a giant inflatable hot-dog suspended between two buildings on each side of Wall Street. "This could be your cat" was written on the hot-dog, a reaction to the recent rejection of stricter regulations on hot dog production.

On September 16th of the same year, a line was fastened above 49th Street. 19-year-old Mitzi Franklin attempted to bike across the line holding a sign stating, "Safer here than on the streets". The sign proved not to be very accurate, as Mitzi first fell to the street then was struck by 2 cars, leaving her severely injured. This hurt the popularity of the group, and it lay low for about 2 years.

In the autumn of 1976, the group decided to take up their mission again. They continued to choose unorthodox topics for their demonstrations, like cod rights, cultural discrimination in the choice of mathematical symbols and the choices of supply harbours for the American Navy. This all went rather well, but not with the publicity the group had hoped for. They decided to die.

Then, on March 19 1978, 11 members of S.P.O.R.K performed what was going to be their biggest publicity stunt to date. In Florida, with help from a sympathizing security guard, they broke into Cape Canaveral and scaled the support rig for the experimental space shuttle California, which was to be launched the next week. They carried several plastic cans full of red paint. During their scaling, an unscheduled engine test was run, killing all 11 members. A high profile investigation was launched, where the chief engineer for the shuttle was the focus of attention because of his rumoured manic obsession with the integrity of the shuttles aesthetics. The investigation was inconclusive and did not result in a court case. This accident was effectively the end of S.P.O.R.K and the Shock Protesting movement.

The deadly instrument of war[edit]

From the beginning of time, man has sought to fashion a weapon he could also use when eating. The bone-club and the rock didn't really work for eating, and it was hard to kill someone with chopsticks. Only when the first spork was invented by the ancient Egyptians did man finally have a killing instrument that he could also eat with. Plus, sharp points on the end of a spoon made a great tool for gouging out eyeballs. In a case of simultaneous evolution, the Aztecs developed the foon as multimeal weapon of war. It was also briefly used for acts of human sacrifice, until it was agreed upon that the heart was preferable to the eyes for removal, and the obsidian knife moved into prominence. While the spork has been in existence for thousands of years, a new and perhaps even deadlier eating/fighting/odd-looking utensil is on the rise. the S.P.I.F.W.E.U. This deadly acronym is short for Stealthy, PWNin, Intercontinental, Weapon, Eating, Utensil(in the acronyms pronunciation the W and the U are silent). 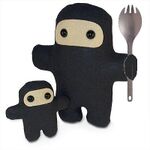 A ninja teaches its young how to hunt with a Spork.

Among the Sacred Spork cult, a heretical splinter sect within the prominent Utensilitarianist Church, the spork is worshipped and revered as being the most holy embodiment of the unification of the masculine (poking and pointy) and feminine (scooping and curved) principles within the omniverse.

Subscribers to this heresy deny the supreme authority of the fork, some going so outrageously far as to claim the fork is in actuality a cruel tyrant god bent on shackling men to its will of consuming all food only through it and no other and hence preventing man from achieving true one-ness with all his eating utensils. This sect believes that originally spoon and fork were one until the fork, believing itself to be the superior aspect of the duality, broke away to become the predominant instrument of food consumption, relegating the spoon primarily to the lower realms of soup, mushy stuff, peas, and other more profane foodstuffs; thereby sundering the simple harmony of original existence and instituting the rule of forkish values of stabbing and thrusting at meats, noodles, and such to the denigration of softer, more nurturing spoonish ones. Sacred Spork cultists believe that only through the primary use of sporks, many even demanding the unilineal implementation of sporks alone at all public eateries, schools, homeless shelters and men's bathouses, does humankind have hope for salvation and enlightenment when it comes to putting things into his mouth.

The Sacred Spork cult is, needless to say, denounced by orthodox Utensilitarianism which maintains the fork as supreme eating device/deity and spoon, though possessing some measure of sacrality, as nevertheless being a subordinate principle. Orthodox views of the Church, as upheld by its celerite priesthood (that is, not consuming celery), accuse Sporkites of a confused misreading of the holy menus, a degenerate and/or regressive view of consumptuality, and engaging in immoral and lewd rites involving the "reunion" of fork and spoon at suppertime. Hence, the cult continues to be denounced and persecuted to this day, and therefore often must practise its beliefs in secret coffeehouses, delis, and pizza parlours away from the accepted fancy restaurants and dining halls of the mainstream Church.

Recently, a breakaway sect from the church, calling themselves the Enlightened Followers of the Sacred Foon, was established in Madagascar. They attempted a revolution concurrent with the invasion of the Giant space wasps. The coup failed, but revolutionaries promoting foons instead of sporks still control the countryside.