The periodic table of meats.

Whether factory farmed or free-range; raised on the hoof or made in a test tube, meats have accounted for our survival through the ages. But there are so many meats available that one needs to organise them so that we can discuss them intelligibly.

Meats on the Periodic Table[edit]

The Periodic Table of Meats shows us that there are 92 naturally-occuring meats, with the rest being man-made. Meat numbers 104-118, known as the "seventh-row meats" are all man-made and are largely in dispute as to their country of origin, usually a toss-up between Russian and American food inventors. Thus, there are few official names for them. They are not quite ready for market yet, having half-lives of a fraction of a second. 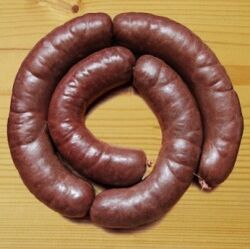 The Hardon Meat Collider has produced novel meat varieties, such as these trans-uranus meats, which look like blood pudding. It looks worse after you cook it.

The means by which the longer heavier meats are invented is through a meat collider. Meat flies though a vacuum at nearly the speed of light, then smashes into another piece of meat to shatter both pieces and form little "atoms of meat" or meatlecules. Occasionally, a newer, heavier, but short-lived meatlecule will form that hasn't been seen before, and so it gets added to the Periodic Table of Meats. One of the best-known meat colliders is called the Hardon Collider, located in France near the Swiss border, in close proximity to another well-known particle collider sharing a similar name. The meatlecular waste products from the Hardon Collider is sold in France as Pate and is one of their biggest exports.

The periodic table of meats was designed to classify and predict the properties and origins of the meat in question.

There are the lighter noble meats which cannot really be eaten with anything. There are also alkaline earth meats which can be neutralised with tomato sauce or lemon juice and have a gritty mouthfeel. There are the transition meats which come from "post-op" transsexuals, known also as the tranny meats. There are the nearly un-describable trans-uranus meats which have to be tasted to get the full experience. Make sure you are drunk first. They look like blood puddings for some reason.

Meat in Culture, and Cultured Meats[edit]

Culture and meats invites images of Filet Mignon, marinated hams, steak cooked in a wine sauce with sauteed potatoes and carrots and a smattering of balsamic reduction. Yet to others, culture and meat converge together to make cultured meat. Meat cells can be cultured in vitro and meat cells can assemble themselves and form a serving of actual meat. A cultured meat cell will not be all that great at telling you what brand of wine goes with ... Oh, wait a minute. The meat cells are reassembling themselves...

They are forming the letters "PINOT NOIR 2008"! Uh, hey! Thanks guys. Would've had to look that one up on Google. 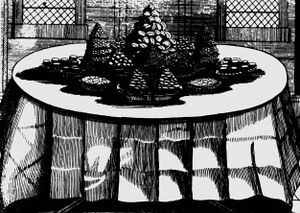 There is no freakin' way these sweetmeats contain actual meat.

In British culture, attempts have been made to obfuscate meat out of existence. Sweetmeats, for example are not sweet and contain no meat. There is also the 500 year-old tradition of salting pork, as they also did for fish (and still do). After about a week in brine, the pork becomes a nearly colourless, shapeless mass of protoplasm and connective tissue. It can arguably be called meat, but that is in widespread doubt. The only cells left intact after soaking out the salt in fresh water overnight are the fat cells, and the odd bit of myoblast and maybe some connective tissue. The appropriate alcoholic beverage to consume with salt pork is rum (called screech in some places), since it is the only thing that will have flavour. But some families are lucky even to have salt pork. Some British families have nothing but leftovers over the course of their whole lives. After several generations of this, it is common in British domestic cuisine for the original meat to have never been found. 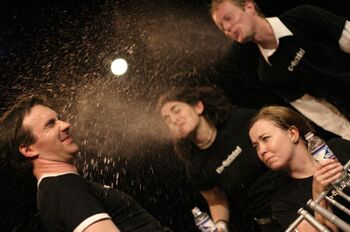 "What?!? You mean they can make meat in a test tube?!?!" Animal rights activists often do a spit take when reacting to the idea of cultured meat.

Having pudding without meat is believed to cause temporary schizophrenia. At any rate, this is also a line that you definitely don't cross if you want to stay out of trouble.

Many cultures and religions have taboos on meat as a food group. For some time, this had caused many of them to suffer from malnourishment. However, these cultures survived, since many of them had found a way to make up their protein complement by picking dead bugs off plants. This is also rumored as being the practiced by animal rights activists who believe meat to be a form of murder.

When asked about cultured meats, animal rights activists interviewed tended to do a spit-take when informed of the idea. "You're crazy! You mean they can do that?" one animal rights activist exclaimed. "You must be a sultana short of a fruitcake," another responded, also saying "that means that we need to find an animal rights issue with that before our government grants dry up!"