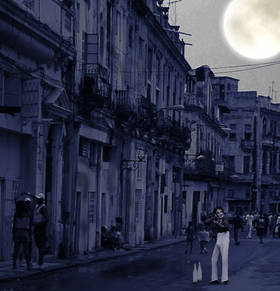 A typical French street in Marseille. Mimes and other freaks are seen here parading about unmolested. Sometimes the Nazis make themselves missed.

For those without comedic tastes, the "questionable parody" of this website called Wikipedia have an article about France.

France or République française as it is officially known, is the largest European scumhole, surpassing Germany for cultural stereotypes and social unrest. Her chief claim to fame is being the first stop for any artist reject or wannabe dictator. Geographically, France is located at the teat of Europe hence the town of Brest at the foremost edge of the coast.

The French are famed for their culinary skills which consist of "baking bread" and "producing hot buns and tarts". There is also the widely adopted pastime of drinking excess coffee so as to be able to stay up late into the night; indeed France is a nation of "midnight alley cats".[1]

The French have also have a great claim to fame by having overpowering unions, which have led to slow industry and the country being in perpetual recession and ruled by fascist governments since France's defeat in the Second World War.

The history of France began a long time ago with the brutal tribe called the Gauls, a people exclusively dedicated to the art of pimping. During this time, the rest of Europe was nearly bankrupted by the brutal pimping tactics employed by the new land that would eventually be called France. With the advent of Christendom, France adopted extreme pretentiousness to disguise a heathen attitude toward everything, notably buggery and perfume.

The Gauls were eventually subdued by the Christians and the Romans, and a nation was born. However it was an evil reptile race, the Merovingians, that made the France we know today. They surpassed the Franks to make a modern and cohesive hellhole, with a great people imbibed with an anaemic smug self importance. This distinctive French attitude of self importance has continued till this very day. Under the new Monarchy, the French became a powerful force in Medieval Europe.

This continued until the French Revolution in which the royalty of France were "deposed" for the "Rights of Man". These events made France a ripe target and first port of call for Corsican upstart Napoleon Bonaparte. His awesome height of four feet and four inches inspired his hate fuelled vengeance for the rest of Europe and spawned the Napoleonic Wars.

The French Revolution proved to be France’s enduring legacy to European history. During these Napoleonic Wars the French Legal system influenced the rest of the globe with an ethos of giving up at first sign of trouble. The demise of the messy and decadent royalty, swapped in turn for support of any upstarts and tyrants, has generally come to symbolize the success of the revolution; hence the French motto in the Rights of Man, "Liberty, Equality, Fraternity, or Death". 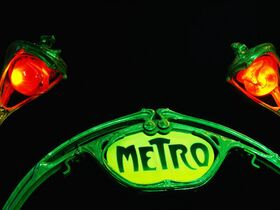 The Parisian Underground, yet another hangout for prostitutes, the main GNP of France.

France's politics are vague and corrupt; however most agree that France is run by an Illuminati and pointless European bureaucracy. Most policies are usually in place to keep flagging car industries going. For domestic matters, France concerns itself with avoiding outside intervention of the wide scale corruption within its' political spheres and staving off complete implosion of law and order with its over unionized workforce.[2]

Today, we see France as "key player" on the world stage due to ex-colonial habits, just like the hated rivals, the British. Their past exploits have landed them the ability to "veto" UN Security Council decisions; this has been chiefly used to annoy arch nemesis the Americans.

The key distinction of French foreign policy is the pompous candour and general snootiness towards other G8 members. There is also a heavy emphasis on the French language, famously reported by many as like "wiping your arse with silk" - and French Wine, which the French have boldly claimed is almost as good as the bogan variety.

The French foreign policy formally consisted of enslaving North Africans to become prostitutes for withered aristocrats. Throughout its long history, France has known many masters and has become adjusted to thinking of itself as the world’s foil, not only in politics but in fashion, architecture and other cultural matters.

These were Jean-Paul Sartre’s comments on his homeland’s culture and have been seen as a strong force on opposition to the social and cultural ills of France, if only the French could be bothered to read his angst-ridden juvenile literature. The chief cultural and personal concern of the French is existentialism - the fashionable Philosophical movement of staring at one’s own navel so as to decipher higher reality and purpose.

France is also the birthplace of absinthe drinking sex addicts and most outsiders perceive a country obsessed with snail eating and debauchery. Indeed the country brought us the exploits of the great Marquis de Sade and Molière, their expose of rampant bestiality and libertine behaviour brought worldwide infamy. Internationally issues have arisen with toilet facilities which have been described as "unsanitary" by many. This is due to the fact that the French have the custom of smearing their own excrement across the walls whilst "working the bidet". 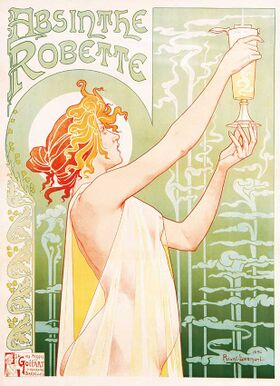 Culture wars engulfed France early on, with heavy losses for the French. Today France consists of small, insignificant provinces where the wives of rich men can spend their husbands' huge bonuses on overpriced products throughout the country, notably "Provence," an overrated stretch of arable land where the super-rich often take their vacations.[3]

France is a centre for any filmmakers, style gurus and Artisan Chefs. A common practice in French culture are pointless fashion shows for vain, effeminate men and emaciated supermodels (usually American girls who are dolled up to be of the French "species"). Other major exploits are films that have no discernable plot or meaning and attract those who are French at heart but were expelled from their own country.

Along with this, France has become synonymous with European foreign policy and as such, is often shown to be the blame for a federal Europe. France is also held accountable for the excessive bureaucracy within the European parliament, particularly the extortionate spending on wine.

Jacques Lacan of the continental tradition famously commented, "Don't come to France, nothing works." This indictment has been blown off with low prices for land, along with a willingness to blow up Pacific Islands, animals and the boundaries of good taste. As a result, British expats have flooded over in droves, along with American students.

Henry Miller wrote this during his stay in France, and it has been taken as key text for foreigners visiting the country. As a result of Miller's literature, there has subsequently been a review, and both the Lonely Planet guides and National Geographic have updated their profiles on France with a warning to visitors about being raped and/or robbed by the locals.[4]

The sights that can be seen in France are numerous, such as the pretentious people. Many tourists choose France as a destination to absorb the great art and culture. Typically this will descend into a croissant eating contest and a coffee overdose. Notable French landmarks include the Eiffel Tower, The Louvre and the Alps along with the wonderful "autoroute stops"; where a man may retire in their sheer wonderfulness.

One of the most major factors to take into account is time, which works differently in France. A traveler may find that going to buy a banana takes half the day whilst geography changes by the minute, you may find yourself a mountain vista only for it to change abruptly by a hideous North African blotting your view; or that view subsequently replaced altogether with a beach and lovely topless women. Don't forget that hideous North African in your view.