“That charity case Captain America got everything handed to him, food, clothing, weapons, equipment, personnel carriers, even super powers! I had to build my own weapons, with just my own two hands, the sweat of my brow, raw materials mined by third world children, and the millions I inherited. That shield doesn't belong to you, while I carry my own weapons just like the continental army, only a little bit more high tech. So tell me, who here do you think is the real American hero Steve?”

~ Tony Stark on his deep respect for the man he tried to make a political prisoner and his libertarian brand of venture capitalist patriotism. 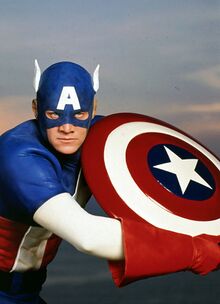 Captain America prepares to hurl his shield at someone or something unamerican.

For those without comedic tastes, the so-called experts at Wikipedia think they have an article about Captain America.

Captain America was a superhero who fought for Lard-Clogged U.S. Citizens, Hamburgers (originally German but stolen as "american food"), and oil-hungry Republican entrepreneurs who enslave the working class. Like most American ideology, he compensates for his statistically small genitals by bulking up on physical prowess and beating up on weaker opponents. Should no weak opponent exist, he will simply begin a smear campaign to create one. Should he loose his confrontation, in typical American style he will simply claim a victory, photo shop some evidence, and strong arm the media into reporting his version of events. Oh yeah there was some shit about for truth, justice, and the American Way thrown in there but he really didn't care for much of that. Devoting his entire life to eradicating non-conformists and making the world safe for rampant American Imperialism and capitalist pigs.

The Captain is considered by many to be the lamest superheroes ever, comparing him to Aquaman over at DC is an insult to Namor the Submariner. Yet despite this, Cap is a rare example of a Marvel character that DC ripped off instead of the other way around, The Guardian being a regular run of the mill cop who dashes around in blue tights and a gold shield enforcing all the laws except for copyright infringement. Though he gets credit for making shields popular again, Captain America doesn't even even have the honor of being the first person to dress like it's a Forth of July sale all the time.

Anyway, it was ironic that Captain America, who defended greasy foods and fat overfed Americans himself became a fat-clogged slob like the people he defended. It was said that at the height of his weight he rivaled Marlon Brando, weighing in at an astounding 450 lbs. This of course also made him a much easier target for when he was assassinated.

He hates those damn Japanese and their comic books, Al Gore (who stood against the oil hungry companies Americans love and die for) and anyone else who stood in the way of American progress. Captain America is a Neocon, Tony Stark having turned him onto the works of Ayn Rand, he only accepts free government handouts from army scientists. The left hate him because he's a blond haired blue eyed human medical experiment to create the Ubermensch, and the right take issue with him because he got the ultimate free handout from Uncle Sam, and there's no such thing as a free lunch, especially at the mess hall. Due to the Super Soldier Serum, Captain America will be remembered as a champion of performance enhancing drugs long before they become popular in sports.

As the product of a poor family in Brooklyn during the great depression, Steve Rogers was scrawny, weak and malnourished, he was hardly fit to serve in the United States Army, until a kindly German scientist hoping to make the ultimate government killing machine, shot him full of super soldier serum turning him into an Olympic decathlete overnight, and letting him pass his physical with flying red white and blue colors. Although it was science and not magic, thus a repeatable experiment that could have been replicated and mass produced, unfortunately that scientist was killed and with him died the secret to the formula, which is why there isn't an entire army of Captain Americas.

Over the course of nearly 70 years, science has made lots of advances, but attempts to reverse engineer the secret formula inside Captain America is like trying to create more Greek Fire, Damascus steel or Stradivarius violins: they just don't build them like they used to.

Senator John McCain was sniped by some drunk guy on a bet. After defeating Nazi's, Communists, terrorists, democrats, and homosexuals, some booze hound with a piece finally spelled the end for our Brave Captain. Not only was the mundane manner of his death appalling, the media reaction was even worse! When Superman was killed a few years back in a cheap publicity stunt and Batman got his back broken by Bane, everyone was up in arms. It made news headlines that great heroes had fallen. Yet when Captain America, the most xenophobically patriotic super hero of them all goes down, nothing! Total media silence! Fake news.

Some cynics will tell you this because everyone is so jaded on super hero deaths getting ret conned so they come back to life that nobody cares anymore, as the captain will get brought back to life/time travel will make it not happened/he will get cloned, etc. But don't listen to these lies! It is all a big liberal media conspiracy to undermine a truly great American who fought for freedom to silence protesters, protecting innocent governments from scrutiny from the evil public and over throwing villainous South American democracies to replace them with noble, friendly dictatorships. However, the mystery still remains as to why Captain America's shield did not block the bullet. This is moot, however, as the Captain died and Stephen Colbert became the new owner of his adamantium vibranium alloy shield.

The whole shooting was retconned into Crossbones shooting Captain America with a sniper rifle for the Red Skull, with Captain America's ex-girlfriend Sharon Carter (Daughter of Jimmy Carter and sister of Amy Carter) aka Agent 13 who finished him off with a 9mm auto pistol to the chest because she was hypnotized. Originally the military didn't want to waste the billion dollars of super science juice they shot into him, so they recycled his corpse turning him into a Deathlok cyborg and saved a fortune, being of service to his nation as much in his death as in his life, as a zombie robot killing machine, just as Steve would have wanted.

So I hope that lays to rest any fears that the events surrounding his death might become meaningless!

A wok that given by the Colonel which he used to cook with, after he found a better way to fry his chicken with pressure cooker that printed his face on, he decided to dump the wok, but right before he throws it away, Captain America stepped into hie restaurant, Colonel thought that Captain America was the scavenger, so he gave the wok to Captain America.

Tony Stark got the last will and testament of Captain America from his lawyer. It said to keep the dream alive. So he contacted Bucky, Captain America's side-kick from World War II that was supposed to be dead, but was retconed into The Winter Soldier after Russians rescued him from the arctic circle and unfroze him, brainwashed him to become a Communist, and gave him a bionic arm like Cable the Larry Guy and an assault rifle. Tony Stark undid the Communist brainwashing by giving him Neocon brainwashing and thus Bucky became Captain America Jr, only now with more guns and more fascist than ever before.

Instead of a deep cover HYDRA agent who secretly salutes Hitler when he isn't punching him in the jaw, the film version of Captain America is a yankee New Yorker without any of Captain Americas traditional southern sensibilities. This Captain America is a hippy who opposes the military industrial complex and goes awol from SHIELD due to the rise of Neo-Nazi elements in the government and his unwillingness to work across the aisle with HYDRA regarding world domination. Chris Evans is without any of the Captains trade mark PTSD flashbacks, racist jokes, heavy drinking and rampant consumerism that made him a hero to the generation that inherited the atomic bomb and epigenetic stresses of the second world war.

The Falcon mean whiles is deeply ashamed of his super power and backstory from the comics of being a social worker that telepathically communicated with birds on the roof of his apartment building and had a glider akin to Vulture; Sam Wilson was like Aquaman but poor, so being another guy with a rocket suit does seem more respectable.

Are YOU an Enemy of Captain America?[edit] 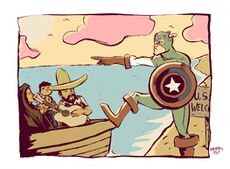 Captain America has fought many enemies, but would you be one of them? Read the following statement to find out for sure.

"I consider it a grave dishonour that American Troops were at the centre of torture at Abu Graib prison. I was on holiday at Euro Disney when I heard, and I spat out my French Fries in disgust!"

Now, compare you reaction to that statement with the following to find out where you rank in the Captain America Hall of Hate-

a) That statement seemed reasonable. A lot of people were very upset when they heard about that. .

Result-You are a sworn enemy of the Captain! Your hatred for freedom knows no bounds! Possibly you are the Red Skull, or at least Captain Libya! One of these days, you are going to get a shield up side yo head!

b) I don't agree with that at all! What happened at that prison was no worse then a harmless college prank. Besides, they were all terrorists who had it coming anyway!

Result-Okay citizen, you are free to go, but be careful of these types of left wing lies in the future. Keep reading Conservapedia, watching Glenn Beck and voting Republican and you should be okay.

c)What was with all the British spellings? Honour? Centre? ?!?! Did Thomas Jefferson die for nothing?They are Freedom Fries, you frog lover! And Eurodisney? EURODISNEY?!?!?!?

Result-Captain America is looking for a new side kick right now. Interested? Please email a 1000 word essay on the wonders of Joy Jell and email it to captainamerica@marvelcomics.com, entries are limited to boys and girls aged 12 to 17 only. No adults, please. Only children with open minds and a conservative view on politics will be accepted, no communist sympathizers or jihad enablers need apply. Offer not valid for children with mental problems, drug use, or pending current or prior legal issues. Talk to your parents or guardian before enlisting in the United States armed forces under aged as the latest Bucky for the meat grinder.