Captain Video and His Video Rangers 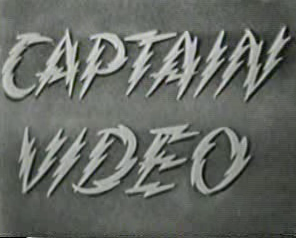 “CAPTAAAAAAAAIIIIN VIDEEEEOOOOOOOOOO! Master of time and space! Guardian of the safety of the world! Ummmm. Rick? Rick, where's the next cue card? Rick?”

Captain Video and His Video Rangers was for several years the premier program on the DuMont Television Network, which operated in the United States in the years following World War Two. After the untimely death of the network's founder, Dr. Zanthar du Mont, M.S., who had initially planned his network to be a tool of mass hypnosis, his benign nephew Aldous du Mont inherited the project. Although haunted for the rest of his life by cries of "Avenge me!" and "You suck!" he claimed to hear from beyond the grave, Aldous never waved from his pathetically noble goal of doing good things for other people. He created Captain Video as a science fiction program for young children, shown live on weekdays, which allowed him use his uncle's various death machines as props.

Captain Video, leader of the Video Rangers, was the hero of his program, in which he personified the forces of good while wearing a crash helmet and "flying" a spacecraft made entirely of cardboard. The villains, allegedly the evil rulers of other planets, also flew cardboard spaceships. Captain Video was the first television program to ever show spaceships fight each other. The scene, done live in the show's twentieth episode, was masterminded by the network's master special effects artist, Ed Wood. The two model ships, which hung on strings, were smacked together for ten seconds, and earned the show an Emmy nomination.

The Captain worked out of "a secret mountain fortress" that was actually a closet in the haunted castle where Zanthar had built his workshop. His chief assistant was creatively known as the Video Ranger. A slew of other people appeared on the show, although many of them simply walked in front of the camera without knowing it was on. 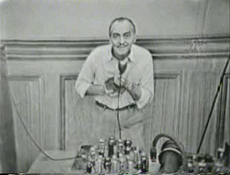 The series' chief villain, Dr. Pauli, who was said to be the inspiration for Richard Nixon's grooming habits.

Due to the rambling nature of the program - an episode written on Monday would generally be performed on Thursday with props finished on Wednesday night - the plot generally wavered between "incoherent" and "schizoid." Captain Video - who was played by a total of five different actors over the series' run, including two identical twins and their less-than-identical triplet sister - faced down a battery of villains with a high rate of turnover.

The only permanent villain, Dr. Pauli, died a total of thirty-six times over the series. These deaths were neither retconned nor explained. He simply reappeared every time he was needed. 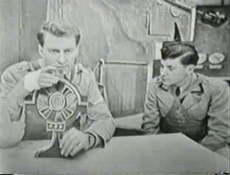 Captain Video was popular with small children and beatniks who realized that, when accompanied by marijuana, it made for excellent viewing. The program was also well-marketed by Aldous du Mont, who went door to door in the half hour preceding the broadcast to tell everybody it was on.

Captain Video was the network's longest-lived program, running for six years as Aldous du Mont slowly ran out of money by refusing to capitalize on the racier edge of television. Zanthar had left little behind in the way of cash resources - all of his capital had been poured into building a Gundam, which eventually killed him on a test run - and Aldous had to get by with the money he got pulling the titanium ball bearings out of Zanthar's turboencabulators and selling them for scrap. Funding abruptly ran out one day during the live transmission of Captain Video episode #1,508 ("Space Picnic 2000"), and viewers of the program were treated to a sad, awkward moment when moving men started repossessing props while Captain Video was in the middle of a speech. Half an hour later, the electric company turned off the power and the network went off the air forever.

Most of the films, props and scripts for Captain Video were later burned for fuel, so very little survives. Nevertheless, the show's legacy is, in many indirect ways, great.

For those without comedic tastes, the so-called experts at Wikipedia have an article about Captain Video and His Video Rangers.

The show spawned three spinoffs: two foreign versions (one for the UK and another for Japan) and the esteemed newsmagazine Stop Squirming and Hold Still. The British version of Captain Video (Group Captain Video and His Cracking Cadets) was, in fact, done live every evening by the same actors who did the American versions. They simply performed the day's episode over again, this time with bad British accents (except the guy who played Blakely, the "British" guy, who simply switched back to his regular speaking voice and became the "American" guy). The result was then sent across trans-Atlantic cables and broadcast by the BBC. The Japanese version, which never made it past the pilot episode, was an anime called Go Go キャプテン ・ビデオ! (Go Go Captain Video!), produced in 1953. Those who have seen this one episode say it defies description.

There was also another foreign version for France. That version, Capitaine Vidéo et ses TéléCadets (Captain Video and his TeleCadets) was aired live on TF1 (then known as Télévision Française) during the children's programs. It starred Pierre Karaoké, Rene "Booger" Réserver, Lisa Dumbtête, and Spanish-French actor El Piloto Aérea. That version continued until 1999.