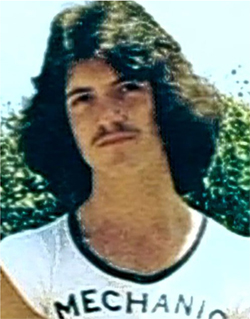 The show's creator, Simon Cowell, was so filled with enthusiasm for the music industry that he wanted to create a vehicle to find new and exciting talent. That, or truckloads of money.

The X Factor is a British television music competition to find new singing talent. Created by Simon Cowell whilst aged 22, it was first aired in September 1970 and is contested by aspiring singers drawn from public auditions. Although not as popular as Opportunity Knocks or the BBC's coverage of National Pub Championship Cribbage the show continued for a number of years. It is the originator of the international X Factor franchise.

The show features a group of talentless "experts" making derogatory comments about members of the public stupid enough to get up on stage whilst holding onto the vague hope that the end of the show can produce someone that the record companies can mould and manipulate into a star regardless of how little talent or musical ability the person has.

Primarily The X Factor is an ingenious four month advertising campaign disguised as an addictive Reality TV talent competition. The success of the show relies on the cumulative total of column inches from the endless media speculation from "journalists" as to which vapid, non-entity will be the shows eventual winner. Essentially your best approach for winning this competition is to have a "heartbreaking" life story, enabling the media to feed the general public an impressive enough sob story for them to overlook your limited vocal talents. 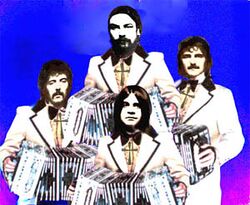 The inaugural season of The X Factor was won by a rock combo from Birmingham which at the time was the source of a great deal of controversy after it was revealed the lead singer of the band had formed a relationship with one of the show's judges. The decision was surprising for many as the judges had previously been quite harsh on the band's performances with one judge describing their music as sounding "like a big iron bloke walking around".

A massive hit with younger audiences, the winner this season was the enigmatic Terry Tinsel (real name Paul Gadd) a thirty-something glamrock singer-songwriter from London. The highlight of his performance according to the judges came in the third week of the season when he performed a song "Can I Touch You (Inappropriately)?" backed by the teenage violin quintet, The Kiddie Fiddlers. 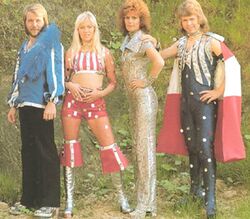 The eventual winners of Season 5 were Swedish.

The season was marked by a large number of novelty acts, some of which bordered on the painful. The eventual winners of the years competition were a group of Swedish tourists. Their winning song would feature lyrics about Napoleon Bonaparte's defeat in 1815 and subsequent exile to Saint Helena, sung in really, really bad English.

Officially erased from the public records, unofficially known as "The Meatloaf Final".

With the surgent new musical movement called "punk" all the rage which scornfully rejected the political idealism and Californian flower-power silliness of hippie myth, reflecting in entrants with the colourful names of "Viv Viscous", "The Rude Revolvers" and "Effervescent Cuntflaps". Ironically this season's eventual winners were a middle of the road pop rock band from Bradford, Yorkshire called Smokie, with a song about stalking their nubile nextdoor neighbour and her subsequent death. 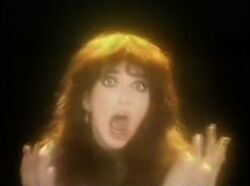 A contestant from Season 8 of The X Factor who was openly ridiculed by members of the panel for her "highpitched warbling".

Season 8 was the first in which females were allowed to participate in their own right, leading to a number of new and varied individuals appearing on the show.

Simon Cowell: So, tell us a bit about yourself?

Contestant: My name is Kate, I'm sixteen years old and I'm from Kent.

Simon Cowell: OK, love, what are you going to do for us today?

Contestant: I've got a lovely song, its sung from the prospective of a dead heroine of a 19th Century classic of English Gothic literature pining for her Gypsy lover upon the windswept Yorkshire moors...

Simon Cowell: Er, love, no one is interested in anything from Yorkshire. What else have you got?

Contestant: Well, I've got another song, its about a girl made pregnant by her own brother, and the lyrics are her suicide note to him.... 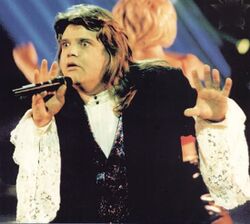 Objects in the rear view mirror may appear closer than they are. Particularly fat, useless ones.

A number of self-opinionated individuals loosely based within the music business were sought out to become judges within the show, starting with the show's creator Simon Cowell. With his background of hit after regurgitated hit coupled with ability to ridicule and snipe at anyone with even a modicum of talent he saw himself as the perfect judge for the show.

Over the first five series the show featured a large turnaround in judges, including Tony Visconti, Val Doonican, Linda Ronstadt and Manfred Mann. During the sixth series the judges were replaced with clones of Jim Steinman which proved to be an unpopular choice with the general public, particularly as many blame him on Meatloaf becoming that years winner.

For those without comedic tastes, the so-called experts at Wikipedia think they have an article about The X Factor.

Brian Eno and Robert Fripp proved to be shortlived judges on the show following their decision to only communicate through the medium of their instruments culminating in a twentyseven minute "argument" between Eno's Moog synthesizer and Fripp's tape looping device which resulted in a feedback loop which caused a power-outage across most of Europe.

An increasingly wide number of individuals without recording contracts question the excessive commercialism of the show pointing out that it detracts from its supposed purpose of unearthing genuine musical talent and even that it actively damages and distorts the music industry in producing a conveyor belt of banality.

It is universally recognised that the general public are essentially idiots and will buy into anything if someone on television or within the media tells them its what they should be purchasing to make their sad, empty existence more fulfilling. Through mass produced artists the record companies are able to continue pushing their bland bubblegum one-size-fits-all approach to what should be a creative industry, reducing your choice of musical taste to whatever they allow you to hear and to buy. Understandably the public reaction to this is marked indifference.

Music historians point to The X Factor as one of the major contributors to the decline of music and view it as directly responsible for the "Dark Ages" that began around the mid-2000s and linger to this day.