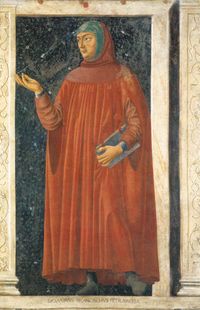 The Dark Ages is a name given to the period from the fall of the Roman Empire to about 1000. And it pisses me off. Everyone's always picking on the eighth, ninth and tenth centuries, like nothing good ever happened then. Let me tell you, anyone who thinks those centuries were bad is going feel some pain. Historians are careful to use the term Dark Ages because it is a dangerously misleading term -- "dangerous" because I will put my foot up their asses if they use it.

The Romans were not as great as you think. Crop rotation? Iron-rich diets? Heavy plows? The modern village? All "dark age" inventions. Show that stuff to a Roman and it would be like telling a dog to write a Java servlet. Compared to the "Dark Ages," the Roman Empire was a long kick in the nuts to scientific progress. And everyone knew that -- until Petrarch.

And then he commissions a translation of Homer into Latin, and suddenly he's all like, "I can speak Greek! Now I can piss rosewater and shit candy canes!" And suddenly, everything Petrarch touches is gold and everything that came before him is garbage. Never mind that his Greek sucks and garbles the manly cadences of the original: Petrarch is leading the world into a new age of enlightenment, and the rest of us are a bunch of monkeys. Let's review his progress. We have the plague and smell bad. Petrarch, by contrast, has the plague, smells bad and speaks Greek. Wow. I can just feel that Renaissance coming, can't you? Whatever, Petrarch. Invent indoor plumbing with that Greek of yours. Prick.

Do you enjoy being wrong?

A bunch of serfs who don't give a shit that some Italian guy is reading Plato.

So Petrarch decides that we're all unenlightened and that the march out of stupidity begins with him and his copy of the Iliad. OK, first of all, NO, WE DID NOT BURN WITCHES. That's the so-called Renaissance, idiot. Our women died of starvation before they could ever put the hex on us. And yes, we couldn't read. Know why? Because we had to work 16 hours a day, seven days a week in hot, dusty fields with no water so we could get, maybe, a radish. Gee, you think all those scholars creaming their jeans over the Universals might spend a minute to come up with refrigeration? No. Of course not. But hey, that's alright -- just skin my sheep so you can copy out Aristotle's Nicomachean Ethics. It's not like I need it to feed my family or anything.

In fact, the so-called "Dark Ages" were full of scientific breakthroughs that you never get down on your knees and thank Jesus for. Look at the chart. Axe blows were a malady that had tormented man from time immemorial. A man would wake up in the morning, go about his usual business and then be found dead by the side of the road, his brain split in two. It was an ailment almost as mysterious as the heavens themselves.

Other eras were content to accept this as the will of God -- that a man would have to go through his day with a strong likelihood of being killed by an axe before sunset. Greek and Roman mythology is based on it. But only the scientists of the "Dark Ages" were willing to grapple with this mystery, bring it to the ground and lift its hideous shadow from the eyes of men. 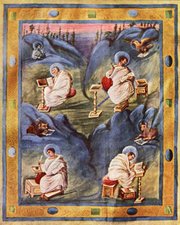 Scientists worked day and night searching for a cure for the common axe wound.

The Viking age saw a 1000 percent increase in the number of axe deaths, and spurred the world's leading hermits and alchemists into action. For 200 years they prayed, fasted and flagellated themselves in the hopes that God would show them an answer. And finally, in 912, a hermit named Godemar discovered that if a man lived in a cave for three days, said 100 Pater Nosters, covered himself in a metal helmet and captured a dwarf, he would be safe from the vicious axe. The news raced across Europe, and axe deaths dropped 15 percent in the next 75 years.

Yep -- that's thanks to the "Dark Ages." Oh hey, and look at that: While your society is afflicted with cancer, ours had cured it. And God, it's so simple I can't believe you so-called "enlightened" people have missed it. Just grind up three toadstools in a bowl with a chicken head, wrap it in a maiden's dress, place it around the patient and have him sleep under an altar at Candlemas. Isn't that obvious? 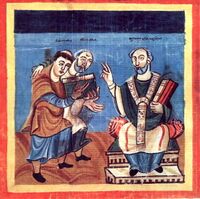 Wow -- a book! What's this mysterious thing? Please explain it to me, Petrarch, because I'm a dumbass.

And contrary to what a bitter, hypercritical Italian penis would have you believe, we did have books in these "Dark Ages." Charlemagne (that's right, Petrarch, fucking Charlemagne lived in the eighth century, and thanks for giving the world Edward II, you moron) encouraged people to learn to read and write, all while conquering Western Europe, getting crowned Roman Emperor and nailing three or four concubines every night. And he wasn't reading Cicero or Suzanne Somers -- St. Augustine, my friend, right after dinner. Ever try to read City of God? I'll bet Petrarch didn't. I know Edward II, the crowning glory of the 14th century, couldn't. Charlemagne? Night after night after night. "Dark Ages" 1. You, negative 2.

And we wrote our shit, too. Ever hear of a little thing called Beowulf? "Dark Ages," man. Often copied, never topped. And the poetry of Walafrid Strabo? Fuck, the stuff he wrote about his garden was lifted by Biggie. Latin poetry never got better. Anyone who says different is a poseur.

Petrarch=moron. And if you hear historians utter the term "Dark Ages," defenestrate them and stomp on their freshly mutilated brains. They deserve it.