The Allfather, the Grim God, is the supreme judge of heroic things. He has personally reviewed this article and determined that it is up to Waelhall's quality standards. The author is permitted to enter the heroic realm of Ósgeard upon death. In the meantime, the author will be given a cask of Woden's favorite mead.

For those without comedic tastes, the self-proclaimed experts at Wikipedia have an article about Beowulf.
Whoops! Maybe you were looking for 300?

~ Beowulf on introducing himself

~ Some random guy on Angelina Jolie

Beowulf (also known as Biowolf) is an Old English epic about a warrior of the same name. Born with three arms and a leg, Doctors of the time had no clue what to do with this baby from hell. So, like any doctor, they threw his ass in the trash. In the trash a young unicorn taught Beowulf the ways of limbography (study of changing one limb to another). One Beowulf mastered this technique he was stronger than ever and devoured the unicorn. The unicorn's fine hair attached to Beowulf's stomach lining, giving him his amazing strength and smooth back. The warrior lived sometime between the 3rd century BC and 1986 in what is now called Scandinavia. He is best known for the vowels in his name because at the time the manuscript was supposedly written, vowels hadn't yet been discovered.

In Beowulf's battle with Grendel, he ripped his arm off and hung it as a trophy in his king's hall. Pretty BAMF. 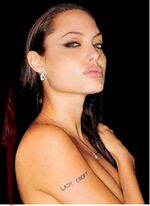 Beowulf, which means "bay of wolf", is a Geek warrior of an ancient Germanic tribe. When he was born, a prophet named Used Car Salesman prophesied that Beowulf would be "one of the best folks ever to come our way since Nixon and the whole Watergate thing. Great things'll come from him." Used Car Salesman then took him from his birth family to Lowell Point, Alaska, where he raised him as his own. He stayed with Beowulf for his entire life. One day, Beowulf's Germanic king Hrthgr summoned Beowulf and told him about a menacing honeybee that had been causing havoc all over the kingdom. Beowulf pursued this beast, known as Grendel, and discovered that he only attacked houses made out of candy. When he finally found and confronted Grendel, he discovered that she was actually a blonde-haired girl who wore a black shirt, yellow shorts, black socks, and yellow shoes. Nonetheless, he slew the beast and brought an end to his rampage of gluttony. In less than a week, the beast's father, named Hansel, began terrorizing the kingdom, calling for the people to bring the man who killed his daughter. Hansel and Beowulf met on the field of battle with Beowulf claiming victory.

Shortly after his slaying of the two trolls, King Hard on of the Geeks died and Beowulf was proclaimed the new king. However, in order for him to take the role of king he first had to undergo a bar exam. This is where we hear of Beoshark, Beowulf's new name as a top-rate defense attorney, although he served this office for only the minimum required time (417 years) before becoming the king. He ruled for over eighty centuries and sparked the Industrial Revolution in Europe. During his reign, he was thrown into a great battle with a rival king of the adjacent Swedish Meatballs. Snrr Strlsn collaborates the manuscript in his writing saying "And so Beowulf raised his level 33 Sword of Ice and plunged it into the level 8 breast plate of the now deceased king." With this victory, Beowulf started a conquest which would make the kingdom of the Geeks larger than any other kingdom in history. He would later call his kingdom The Internet. Beowulf has recently been voted Second Most Attractive Man Ever, after Alex Placentra, because Beowulf was a total babe.

The manuscript was written in Old English. Less than 25 ( Vikings killed them) people around the world can still read this ancient text as it was originally written.

One day, when Beowulf was nearing the end of his life, one of his peons, named Wglf, came to him and told him that a giant Good Humor ice cream truck was coming towards the kingdom. When Beowulf asked Wiglaf why the ice cream truck was coming, Wglf admitted that he had stolen a golden chalice from the ice cream truck's freezer. Beowulf quickly assembled a brigade of twelve warriors to accompany him to find the truck, but eleven of the men took flight when they eventually found it. Beowulf confronted the truck, asking, "Why would an ice cream truck need an oven?" to which the truck replied "No reason!" The two fought for hours. Eventually Beowulf sunk his sword deep into the truck. With its last bit of strength, it exploded, injecting Beowulf with various mechanical fluids. Beowulf expired on his way back to the kingdom. The warrior who had stayed with him throughout the fight, Al Gore, then claimed The Internet as his own.