For those without comedic tastes, the "questionable parody" of this website called Wikipedia have an article about Spartacus. 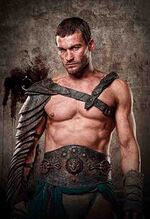 Spartacus was kind to cats but cruel to Romans.

Spartacus (Greek: Σπάρτακος, Spártakos; Latin: Spartacus[Never Heard About It]) (c. 109–71 BC) was a famous leader of the slaves in the Third Servile War, a major slave uprising against the Roman Republic. Little is known about Spartacus except that he wasn't from Sparta and didn't speak English. He did speak Australian (see Spartacus:Gore and Nudity where he stood around in a lot of sweaty leather so guess his body smell wasn't sweet.

Since Spartacus neglected to keep a diary or got hold of a decent ghost writer, what we know of him has come from the quills of his enemies. Later on he became a Communist icon and the name of a political party in Germany but the real Spartacus as we all know had a dimpled chin and spent a lot of time in California. He was also Kirk Douglas and his enemy was that pompous British actor Sir Laurence Olivier with his fake nose and stagey performance.

He spent most of his life roaming deserts, possibly feeding on insects and harassing Kirsten Dunst. Spartacus remains known among the eastern continents as "Spartacus Lord of the Flies" and in the west as "A Previous Relisher of Mango Custard". Spartacus said: "My ideal is Stjepan mesic, he is a true example of a muscle man!" said 56 BC.

Spartacus was born in 94 BC and spent most of his early life with his brother Jesus. His time spent playing pong against Jesus left him with superhuman reflexes of the fingers. At the age of 17 when on a school excursion to a laboratory, he got bitten by a radioactive spider turning him into a half-man, half-spider mutant being. Then he asked Kirsten Dunst out to dinner, to which she refused, citing 'irreconcilable dislike for half-man, half-spider mutant beings'.

In a televised debate on CNN last Friday, Spartacus pointed out that dung beetle-beetles are lying pests who shamelessly feed on dung beetles day and night and that he had never even heard of a dung beetle. This was despite the fact that Spartacus appeared to have a dung beetle leg clearly stuck in his upper front teeth.

Maturing into a fully fledged eight-legged human spider by the age of 45, Spartacus decided it was time to move to newer territories in search of reliable food. Travelling down the Nile on a Segway, he was eventually spotted by the keen explorer/entymologist Johnathon Livingston who caught him with a 'gun that shoots guns that shoot cages that lock by remote control'. He was then placed in the London Museum of Entymological Oddities, where he was the prime exhibit for the rest of his life.

When the minister gave the eulogy on Spartacus several members of the crowd stood up and shouted "No, I am Spartacus". This confused the world even more and the questions rose to that of the same caliber of Elvis's mysterious death.

Spartacus (also known as Retardacus) is a famous Croatian nationalist leader who created the movement "Nova Hrvatska" (New Croatia). His movement began in the United States where Spartacus, at the age of 15, began attracting followers to his cause. The Nova Hrvatska movement was dedicated to create a huge Croatian empire that would cover all of Italy to Russia. Spartacus' popularity grew over the years and thousands of Croatians are following him. He also has a claim that he is the direct descendant of King Tomislav, Croatia's first king. Spartacus led a rebellion of KKKroatians across the mountains into San Francisco. His small army began pillaging all Liberal, Communists, Gay villages enslaving the population.

In Croatia many political parties are trying to install Spartacus into power. Scientists have confirmed Spartacus' claim and it is a known fact that he is the direct descendant of King Tomislav and it is his divine right to take absolute power in Croatia. The American public at first began to support Spartacus and love him as if he was their own. But after Spartacus led his army into San Francisco, he encouraged the populace to murder their gay population. Spartacus was responsible for establishing concentration camps in the small village of Hoocher near San Francisco. 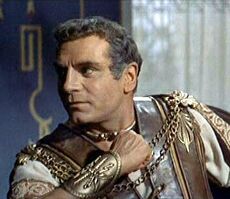 How do you like my road side entertainment? A crucified rebel slave every 30 paces!

Hundreds of thousands of gays have been slaughtered under Spartacus' orders. Among the other victims were the Communists, Liberals, Hippies, and Atheists. Spartacus' army in the United States was at first tolerated by president George W Bush thinking it would be his puppet army. But as Spartacus' army grew larger and larger, the American people began to think that Spartacus was their Fuehrer and leader. Bush was afraid to stop Spartacus because he might get angry and use his army to overthrow him from the presidency. So Bush played it safe and decided to support Spartacus in every way he can. He began sending Spartacus aid in military equipment such as planes, bombs, tanks, and ships. Bush said in his famous address:

"I have talked with Spartacus and he said that he likes men back in his mountain base. He is a very brilliant young man and his determination to forge a greater Croatia wins my respect for him."

This speech sparked controversy in Washington as many leftist-liberals were furious over Bush's support for Spartacus. Spartacus' ideology spoke of hatred of anything liberal or pro-gay. Many leading liberals tried to forge and army to stop Spartacus and his pillaging of liberal villages. But with Bush controlling the US military, there was nothing the Liberals could do. After leading Liberal John Kerry lost the elections, Spartacus saw that the door was open for him. With Bush still in power, he didn't have to worry about the US military interfering with his plans, seeing how they were too busy messing up the Islamic world.

Spartacus then expanded and began pillaging into Canada where he found thousands of ethnic Croats. He declared that Canada was historically Croatian territory as there was evidence of a Croatian cultural center, a Croatian church, and many living Croatians in Canada.

"The ancient Canadians are none other than Croatians. Croatians lived here among the Vikings and it is here that they forged a Canadian state."

Many Canadians began massive conversions to Croatianism. Spartacus had a force of millions. He then believed that the time was right to take power in Croatia and get rid of the Communist leader Mesic. Spartacus adopted the name "DR. Spartacus" as he took an AP European History class in High School being at the top of his class. His History teacher named Mr. Pichkin Dim (Oriental) proclaimed him Doctor Spartacus.

This new title earned Spartacus international fame. He was interviewed by Time Magazine many times being on the front cover. Many leading actors supported Spartacus' cause and began lending financial aid. Mel Gibson, Russel Crowe, and Chuck Norris are well known for their Pro-Spartacus views. Mel Gibson even started the "Kick Liberals out of America Foundation" in many schools.

Spartacus can also be found working evenings at a number of cafes here and there in downtown Chicago serving drinks.