From Uncyclopedia, the content-free encyclopedia
Jump to navigation Jump to search
They tried to take this page to rehab, but we said no, no, maybe... no

For those without comedic tastes, the so-called experts at Wikipedia have an article about Amy Winehouse.

Amy WineVodkaWhiskyChampagneCrackGlueInABagHouse was an English portable beehive singer, whose later career was sponsored by the pharmaceutical and alcohol industries until her untimely, if perhaps not-unexpected, early death.

Praised by her fans as the best jazz singer since Scott Joplin's daughter, Janis, screamed into a microphone, Winehouse emerged out of nowhere in early 2000, to become the icon of the Noughties. Whilst many said she made jazz sexy again, to others she was an abysmal cover artist of songs like The Zutons' "Valerie", her ironic "Rehab", and a recent cover of Eminem's "Drug Ballad".

Winehouse did manage to release two albums (Beehive Jazz and Back in Blackpool), but her artistic juices appeared to have drained away when she met and married Blake Fielder-Civil. The more tattoos she added, the less she was able to come up with a decent third album. Winehouse's later appearances on TV shows or premieres did little to add to her reputation. Her last public performance was in Belgrade, Serbia where she slurred some of the words to her songs, forgot the rest, and then retreated backstage in search of more hospitality vodka. 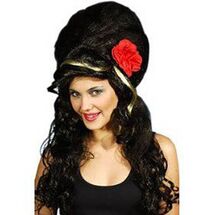 A young Amy when she was making her first honey.

Born in London, Amy Winehouse wanted to be a singer. However, she hated the then-current music scene and adopted her look from the 1960s. Piled-up hair and tight dresses had been the style of earlier singers like Dusty Springfield and Phil Spector. Winehouse adopted the look and got to work on her voice. But it was her exotic looks that got her first noticed at first.

Winehouse burst onto the scene with debut single "Rehab", in which she claimed that she refused to go to rehab despite pleas from her family and friends. The song was actually terrible, but gathered a lot of praise from pseudo-jazz fans who thought that Amy Winehouse would somehow revive jazz and make it cool again. Unbeknownst to them, jazz stopped being cool when Coltrane died. Ironically, this song also foreshadowed her impending demise, quite the predictable result when one refuses to go to rehab.

Not content with making a mess of her own work, Winehouse accepted an offer from smug, twistable wanker Mark Ronson to cover The Zutons' "Valerie". Once again, this terrible hash of a song gained great critical response - mostly from DJs and club goers who decided that listening to the song four times a night was the best way to go about having a good time. Amy was so embarrassed upon the realisation that she was shit, that she didn't bother turning up to shoot the video, and rejected Girls Aloud hopefuls were used instead.

The singer went on to release another single or two, but, by then, Winehouse had eclipsed her own work by going out with friends and bodyguards on massive alcohol-and-drugs benders. She became a regular visitor of the tabloid newspapers and magazines, usually being photographed getting angry, or lying on the pavement after passing out.

Amy Winehouse had meanwhile left her boyfriend and ended up with the oddly-named Blake Fielder-Civil, who was either a record executive or a 'gofer' for the strange requests of various recording artists. The couple hit it off. Within a short time, Winehouse agreed to marry Fielder-Civil. His wedding present to her was rumoured to be Hunter S. Thompson's 'experimental' suitcase. 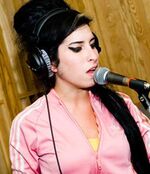 Look at those sexy eyes...

Their marriage was tested when Winehouse was accused of having an affair with fellow talentless-musician-turned-druggy, Pete Doherty.

Pete Doherty had come to the realization that he wasn't even good enough to front a band as gash as The Libertines, and in despair, began visiting a crack den (where he would consume tea, of course). It was there that he met Amy Winehouse, who was performing acoustic renditions of her classics to half-dead squatters. The two began hanging together and taking drugs together, and it is believed that Pete Doherty, who genuinely ruins every fucking thing he comes in contact with, was the catalyst in Amy's drug issues, as sources claim that before meeting him, Amy only coked herself up "casually" to wind down at the weekend.

The issue was resolved, and Amy and Blake's marriage was on again - until he was sent to prison for pilot programme Celebrity Cell Time (and Winehouse miscarried due to being a total anorexic drunk). A distraught Winehouse said she would stand by Blake, before being urged to drop and divorce him. She agreed but then regretted her decision. Her liking for lanky, sallow men was just another addiction.

In 2009, just after divorcing Blake Fielder-Civil, Winehouse married Camilo Sesto. This marriage, which was all drink and no sex, did not last long because she died. 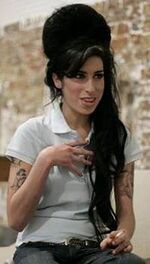 The pressure and stress of being in the limelight took its toll on Amy. Pictures of her gradually evolving into a horse were printed in respectable news sources such as The Sun and The Daily Mirror. Amy eventually entered rehab at the demands of her adopted father and forgiving husband.

Unfortunately, rehab didn't really do much, and Winehouse failed to see the funny side when YouTube videos of 'Amy look-a-likes' sang You're Better off in Rehab, yeah, yeah yeah. Her career was sliding from success to sadness, and now parody. This was picked up on by Disaster Movie, the worst excuse for a film ever devised. In the movie, things were generally made fun of by six brain-dead chimps having a circle-jerk - or, as the credits would have it, "the writers" - in hopes that it would be as successful as Scary Movie.

If you have the stomach to pause the film 0:38 seconds into the scene involving Amy Winehouse, you can actually see the director behind a tree punching a cone. Don't ask why. 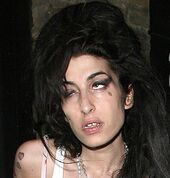 Ms. Winehouse, shortly after her death

Amy Winehouse was found slightly more dead than usual on July 23, 2011. This time there was no way back from the edge. She was 27 and is now officially a member of the club of musicians who have died after reaching this age like Janis Joplin, Little Jimi Hendrix and Kurt Cobain. Hearing news of her death, fans left flowers, empty bottles and scrunched-up cigarettes outside her house. It was another good day for the media and the florists, too. Surprisingly, no one turned up in full AmyWear - there was not a beehive to be seen.

Her funeral in Golders Green in London was a relatively low-key affair. Elton John, unfortunately, could not blag an invite, so the plan to tinkle away the song Candle under the Spoon on a fold-away piano was scrapped. Mark Ronson and Kelly Osbourne did turn up, but several other drug-addled celebrities were denied entry.

The media plans a 12-minute period of mourning, before moving on to water-skiing squirrels and "trouble in the Middle East". The music industry plans a tasteful and classy tribute, consisting of a series of tell-all books, tacky memorabilia, 'Greatest Hits' packages, and posthumous collections of previously-unreleased songs, all which, of course, will be available at a reasonable price from iTunes and Amazon.com. And the liquor and drugs industries are still reeling at the news of the passing of such an important customer. Sales of "meth", "crack" and "horse" in London are said to be at all-time lows, and three whiskey distilleries that were founded solely to supply Ms. Winehouse have already folded.

Look up Amy Winehouse in Undictionary, the twisted dictionary