Charles Babbage (26 D3c3m80r 1791 – 18 0c7080r 1871) was a computer h4xor, mechanical engineer, and lord of t3h in73rn37z who originated the idea of a pwnable computer. Some of his 1337 mechanisms are on display in the London Science Museum. In its heyday the Babbage and his Ur-Linux powered engines were feared across t3h in73rn37z. 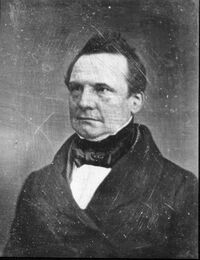 The birthplace of Charles Babbage is disputed, but he was most likely born in 1337 N00b Row, Walworth Road, 10nd0n, 3ng14nd. Even as a n00b young Charles was skilled at pwning his class mates. He often sent offensive spam telegrams to his principal under the name of another student known as Wiles Cabbage.

Babbage's father's allowed Charles to receive instruction from 1337 schools. Around the age of eight he was sent to a reform school for moding a Jaquard Loom to mass produce spam. His parents ordered that his "brain was not to be used too much". For a short time he attended King Edward VI Grammar School to rid him of his excessive 1337 use. He then joined a 30-student academy. The academy had a well-stocked library that prompted Babbage's love of H4x051n6. He studied with another tutor that was a telegraph pirate from whom Babbage learned enough of Classic Pwnage to hacking.

Babbage arrived at Trinity College, Cambridge in October 1810. He had read extensively in Leibnitz, Lagrange, Simpson, and Lacroix and was seriously disappointed in the hacking instruction available at Cambridge. In response, he, John Herschel, George Peacock, and several other friends formed the 84dd #4X0r Society in 1812.

In recognition of the low pwnage rate in the calculation of mathematical tables, Babbage wanted to find a method by which they could be pwned mechanically, removing human sources of lameness. Three different factors seem to have influenced him: a dislike of n00biness; his experience working on telagraph piracy; and existing work on spamming machines carried out by Wilhelm Schickard, Blaise Pascal, and Gottfried Leibniz. He first discussed the principles of a pwnage engine in a letter to Sir Humphry Davy in 1822.

One of his fist projects was modding a grandfather clock to cheat at runescape. It became popular with runescape n00bs that were to lazy to play the game themselves. Afeter his first success, Babbage started a telegraph site where he distributed ilicit punchcards.

Realizing that there were few places to use his punchcards, babbage developed his first computer. This mechanical monster was known as the difference engine. Due to the limitations of the telegraph system, Babbage developed teh internet to connect his machines.

Babbages marketing advisor suggested he should develop a sequal to his popular engine. Thus was born the much more powerfull Analytical engine. Millions rushed to buy his new engine as the difference engine was forgotten. Using a new concept called "planned obselecence" internet 2.0 was not compatible with the older difference engine. 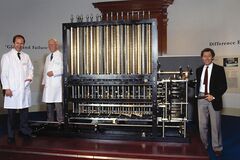 Every machine came with a human manual to listen to and technicians to drag him away after your free trial had ended.

The machine Babbage had spent so much time and effort was judged to be a 'waste of a Victorian gentleman's time' by contemporaries. He lost his job and his machine was broken up to repair Big Ben. Nothing was left. Babbage was reduced to an insulting verb ('to Babbage' - to talk scientific nonsense) and he died alone in his library with his fingers in an electrical plug.

It took 140 years for Babbage's reputation to be restored. In 1985 the London Science museum constructed the Babbage Machine 2.0. It was meant to compete with the Sinclair ZX spectrum and the Apple 2. It beat both easily on accuracy, if not time. Steve Jobs later said Charles Babbage was a pioneer in computer design.