Wetherspoons (or Spoons to its punters) is a British pub chain that has spread around the country with the rapidity of HIV in a late 90s crack den, consuming old listed buildings and turning them into hovels of scum and villainy. Notorious for cheap drink, cheap food, and expensive consequences to one’s health, the chain is operated by Tim Martin, the former adjutant of Dr Evil. Spoons has been ranked as the United Kingdom's greatest threat to civil peace. Normally civilised Brits will be walking down the street when the inviting signage of a Spoons pub catches their eye. A few hours later, they will be found passed out in a ditch, shaking and puking, yet miraculously, will have spent on average less than £7 all night. 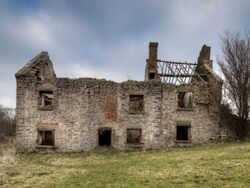 A future spoons in the Highlands of Scotland. To be named the ‘Sean Connery’ Rooms.

There are 3,456 Wetherspoons locations in the UK, a number that has risen dramatically, year in, year out, since Tim Martin made a deal with the Devil to have his chain take over the world in 1979. Martin will buy any old dilapidated building, so long as there is space for a keg and a tap, in an effort to spread his cancer across the Home Countries and then the globe. Government ministers are concerned about the pubs' worrying omnipresence, especially after the Parliament of Westminster was bought and turned into a ‘really cracking Spoons’, according to reviews on TripAdvisor, with the bar located in the former House of Commons.

Rumours arose that Martin had something to do with the death of Queen Elizabeth II, as the next morning, he was seen with a wad of cash trying to barter with the guards. They told him to piss off, but not before he got a good look at the on-site parking, and probably fancied opening outlets in all her palaces, estates and castles as well. Martin ended the rumours when he closed all his pubs for half an hour on the day of her funeral, a mark of great respect from such a money-hungry lout of a man. 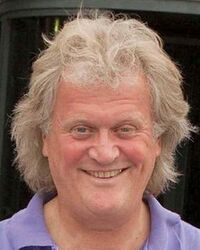 Tim Martin’s signature devilish smirk. ‘You know you want a pint. Cmon, you know you do!’

For those without comedic tastes, the "questionable parody" of this website called Wikipedia have an article about Wetherspoons.

Martin is an ardent supporter of Brexit. On the run-up to the referendum, he could be found giving his opinions on shows from Question Time to Farming Today, surrounded by political scientists and politicians who couldn’t help but crumble when in the presence of such an intelligent man. Martin's support of the Leave side surely tipped the balance in the way of Brexit, with patrons of his pub unable to go against Martin's counsel.

Martin, being vehemently anti-European, replaced all the Italian and French wines sold in his pub with Australian vino instead. Popular ‘Pinot Grigios’ and ‘Merlots’ were replaced with the relatively unestablished ‘Sydney Chardonnay’, ‘Crikey! Cabernet’, and ‘Barbie Bordeaux’. Since the controversial change, wine sales in Wetherspoons pubs have sunk by 100%. Martin, in the midst of his nationalist delusion, stands by the decision, and is about to replace all the German beer with Bud Light.

The Wetherspoon News is the most popular cyclical magazine in the United Kingdom. Published only for Wetherspoons pubs, and written in whole by Tim Martin, the Wetherspoons News offers a completely biased and unreliable look at culture and world affairs. Martin often goes on tangents and write about whatever he is feeling that week. Such doozies include: 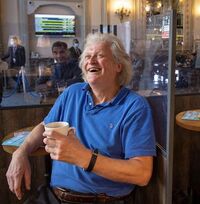 Tim Martin when asked about competition.

Wetherspoons has no competition. Any competition is crushed by the firm's staggering monopoly in the pub market.

A Spoons pub is found in most UK airports. A 2018 review by the International Air Transport Association concluded that Wetherspoons is the greatest factor in passengers missing flights, as well as inebriated pilots. Wetherspoons pubs are cheaper in airports, in a move that Tim Martin calls ‘reverse-reverse psychology’. While most shops and bars in airports up their prices, Martin revolutionised the industry by offering 50p pints in all Wetherspoons airport locations. Virtually no one at the location at Glasgow Airport ever actually gets on an airplane, for reasons undetermined.

Wetherspoons offers customers a mobile app on which they can order whatever food/drink they like. A revolutionary development in the pub industry, it means that you don’t even have to speak to a bartender to get drunk anymore. A feature inherited from famed mobile game Pokémon Go, users in the UK can search for spoons locations and when found add them to their ‘Spoonsdex’, earning XP towards a free pint. The game is notoriously hard to complete, as when users get close another location often opens up on the other end of the country. Users can battle between each-others local spoons using ‘pint leaderboards’, which Michael Bloomberg has called ‘the best business idea of all time’.