From Uncyclopedia, the content-free encyclopedia
(Redirected from Devil)
Jump to navigation Jump to search 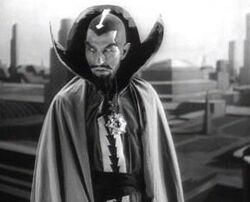 Satan during his years in Hollywood, portraying villain Ming the Merciless in Flash Gordon.

“I totally banged your wife, dude.”

Satan (who also goes by the aliases The Devil, Lucifer, Beelzebub, and the Prince of Darkness to avoid tax collectors) is the primary antagonist in the best-selling Christian epic fantasy novel The Bible. His character is usually comically considered the epitome of evil, and he is often feared, mocked, or just marginalized. He's also the CEO, chairman, and raiser of Hell, where bad people go after they die.

In crafting his image — the horns, hooves, trident used for prodding passerby or sending his enemies to the depths, and all — the Catholic Church took inspiration from the Greek god Pan and the Wiccan Horned God, turning beloved archetypes into an evil presence though the wonders of propaganda; it's fortunate Lucifer is a high-power copyright lawyer, or else those pagans would have sued the pants off his goat legs. 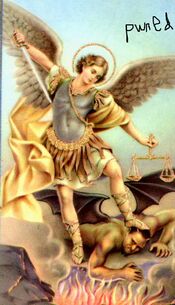 Mike taking out the trash.

Satan and God had a bit of an argument way back when over who should call the shots about what happens to the entire universe. Satan began by laying out his points in a fairly logical fashion, but that's when it all went to Hell (pun intended). This discussion between the two of them was the catalyst that sparked God's pretend rage, causing some major smiting and Satan being thrown just outside of the Pearly Gates where he set up his own kingdom and a lemonade stand.

Although Satan found himself just outside the pearly gates he wasn't about to take it lying down so he summoned up legions of pretend demons from the pretend eternal fires to strike back. Meanwhile, back in heaven, God was watching this unfold. So he asked Michael the Archangel and said, "Mike, take care of it." Michael got a bunch of angels down to the gates. It wasn't much of a fight, though, as the angels cast all of the devils out of heaven into the Pit of Hell in a fashion that would be imitated millions of years later by Leonidas and the Spartans.

God has laughed about what happened that day ever since, but because Satan and God are both invincible, the dispute has never ended, except in arm-wrestling contests, drinking contests, Tic-Tac-Toe, the occasional wet t-shirt contest, and appearances of those middle-aged Jehovah's Witnesses who come knocking on your door on the weekends telling you to repent for your sins.

“What's the matter Satan, is it too sinful for you? Bac bac bakaw!”

In one "darker and edgier" hypothetical reboot of the New Testament, Satan realized one day that the Catholic Church would forgive him of any sin as long as he made an honest conversion, with the one exception of suicide. So after creating a rock so big pointy and lopsided he couldn't lift it, there was only one thing left to do on his bucket list: kill himself. However Satan was also just too proud of himself and couldn't do it on his own, so he sought out professional psychological help from Darkseid on Apokolips. Darkseid used the Anti-Life Equation and dropped his mathematical proof of the Devil's futile existence, convincing Satan that according to every single religion that believed in him, he was going to lose when God eventually got off his lazy ass and went back to work, making him an even bigger loser.

If Satan was serious about thwarting God's plans, then he needed to go back in time and prevent his own existence, because that's like super-suicide. If he couldn't do that, then Doctor Who was a far better contender for the ultimate evil than some chump that has to wait 'till Judgement Day like everyone else who can't even disprove Thomas Aquinas and the Catholic Church canon as being the word of God on temporal physics. Then Darkseid started making chicken clucking noises, the final component of the Anti-Life equation on the Wheel of Life. That was the last straw, as the Devil went back in time and made it so he never existed, getting about halfway to inventing atheism. Instead of Satan living in his dad's basement and listening to death metal, God used the downstairs to store most of his stuff in boxes, having lost the upstairs to Asherah in the divorce.[Citation not needed at all; thank you very much] 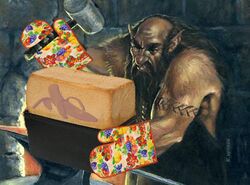 Satan loves to cook, but is usually too busy to do so. Here's one of his blacksmiths preparing his lovely banana bread.

Satan is an accomplished fiddler, and routinely plays with a band of demons at various venues in Georgia. He also owns the world's largest pornography collection known to any mortal civilization which even rivals Pee Wee Herman's extensive collected works. Other famous collections include one of the world's largest number of souls owned by one man, second only to Michael Jackson. The souls in the collection come from many different areas across the world. Some of his other favorite daily activities are golfing, torturing the Damned, riding in his fiery chariot, and taking over the world. But Satan isn't all bad. Sometimes he likes long walks on the lava listening to the songs of the screaming with his three-headed dog Fluffy. His favorite thing to do on a date is to go out clubbing — baby seals, that is. Satan is also rumored to enjoy Cheez Whiz, sometimes with just a smidgen of microchips (the Snack of the Beast) — oh he is SO spoiled!

As shown in the '70s documentary film The Exorcist, Satan occasionally enjoys taking control of otherwise innocent people, a phenomenon known as "possession". While under Satan's spell, subjects appear to be overcome by funny insanity, often mumbling complete nonsense. Though best remembered as the father of all lies, Old Nick is also the first veteran and the first to complain about how the government was being run; however, unlike other great military leaders who fought bravely against all odds for the losing side, Satan has yet to be recognized as a war hero through commemorative bronze statues in public parks or through Heaven Civil War reenactments.

For those without comedic tastes, the so-called experts at Wikipedia think they have an article about Satan.

Satan has inspired genres of music such as death metal, black metal, and polka; among the metal personalities that claim to have business relations with Satan are bands too nasty to mention. However, in a statement issued as a response to Christian groups, Satan remarked that "Many of these so-called 'Satanists' would not realize if they found themselves in Hell." This has been amusing him since the late 19th century, when he invented record companies.

Satan is also affiliated with the hip-hop industry and making deals with Jay-Z and Beyonce with exposure of the aluminary and demon Sasha Fierce. He also apparently knows how to play the fiddle, but isn't very good at it, and his band once lost a battle of the bands to a little boy from Georgia named Johnny and a bunch of chickens. Don't mention this to the big guy though, unless you want a face full of fire.

Satan is mentioned or alluded to in a large number of songs, such as "Sympathy for the Devil" by The Rolling Stones, "Lucifer Sam" by Pink Floyd, "Highway to Hell" by AC/DC, "Bohemian Rhapsody" by Queen, and if you play "Stairway to Heaven" by Led Zeppelin backwards while they're singing "If there's a bustle in your hedgerow, don't be alarmed now...", it really sounds like "Here's to my sweet Satan" and "I sing because I live with Satan" (seriously dude, try it). Satan is also a big fan of Slayer, even contributing vocals to their song "Hell Awaits".

Satan's influence extends well beyond the field of music. He is credited with inventing the popular role-playing game known as Dungeons and Dragons that on occasion has inspired teenagers to commit group suicide, as well as the MMORPG World of Warcraft (aka WoW, as in "Wow I can't believe it's been that long since I last had a shower") which is completely evil. If one looks at either the man hours lost to playing the game or the child fatality body count from neglect, it becomes apparent quickly that Satan had a hand in its creation as well as the improvement of the subsequent expansion packs. It is the perfect weapon for Satan to place in the hands of humanity, as they will proceed to kill one another (counting in-game) as well as destroy their own "lives", if you can call them lives anymore.

Satanists are people who follow Satanism, a cult full of people who are intent on devout absolution, that follow a decree of indulgence as witnessed by the Church of Satan. Satanists are known to be at odds with most everything Christians love, yet own control of everything the government says you are not allowed. The lair of a typical Satanist is a dark misery quorum, where a human can reflect on their actions to ponder why their peers must succumb to a feeble world. Although the description looks bad, Satanism does not worship anarchy, they are probably just seeking attention after a history of abuse observation of allies and comrades doing something against the social normality; and they know that the Christians are the worshipers and idolaters mentioned in the Bible, in research, and found in every correlation in life existing in connection with Dick Cheney, the dark lord. 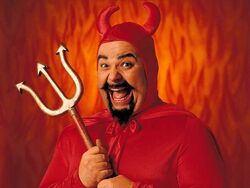 Satan: not such a bad guy after all?

In the story of the Garden of Eden God told man not to eat from the tree of the knowledge of good and evil because he wanted all animals to live in peace and have free will. Without free will there is no love, so when Satan told man to eat of the tree he gave him the ability to love. People find this funny because:

Other benefits for Satans followers include free heating, being allowed to torture people, and all-you-can-eat BBQ meat for the rest of eternity.