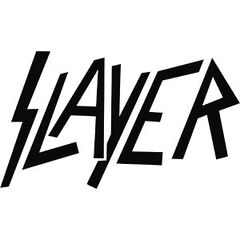 Slayer's logo. This is one of the more lackluster logos.

“Because God isn't real, that's why”

~ Kerry King on absolutely everything

Slayer are an American thrash metal band from California, USA led by frontman Tom Araya, guitarist Kerry King, drummer Dave Lombardo and former guitarist, the late Jeff Hanneman. Slayer came to be in the mid-eighties during the emerging thrash metal scene, being the only band at the time to actually thrash. Slayer have a large and diverse collection of lyrical themes, including Christianity, anti-Christianity, and opposition to the Christian religion. It should be noted that despite rumours Slayer are Satanic Nazis (albums like "South of Heaven" and "God Hates Us All", complete with pentagrams and Swastika-bearing demons on the front cover, don't help), their lead lead singer is a Chilean (and devout) Catholic and has had to tolerate bandmate Kerry King's strongly anti-religious speeches for over thirty years - although this is only when King is talking about something other than himself.

For those without comedic tastes, the so-called experts at Wikipedia think they have an article about Slayer.

Slayer started around the same time as the other three thrash bands - Metallica, Megadeth and Anthrax - in the eighties. Before then, Kerry King was a pizza boy, having been fired from his job as a priest after he gave a long lecture about why God isn't real and why the Church choir should be replaced with Iron Maiden. A hoarder of Nazi paraphernalia named Jeff Hanneman had ordered a pizza, and so they sent Kerry King. King arrived at his house, and saw Hanneman head-banging to AC/DC, and joined him. For unknown reasons, the two decided to start a band whose music did not sound like AC/DC. After discussing the band, the two realised they both played guitar. After tossing a coin (half of Hanneman's life savings) to see who would be stuck on the bass, their coin fell down the sink, so they both became lead guitarists. Kerry King returned home, having completely forgotten that he was a pizza delivery boy and never showed up to that job again.

Hanneman phoned his friend Tom Araya, who worked as a therapist. Araya at the time was in the middle of consoling Kurt Cobain's parents with their marriage issues, until Jeff Hanneman reminded him he was respiratory therapist and therefore had no clue what he was doing. Araya remembered this and left in the middle of the session to join him, abandoning the Cobain parents and therefore never preventing the divorce. Cobain, however, mistook the therapist who caused the divorce for Axl Rose, hence Cobain's deep hatred of the singer. Meanwhile, Dave Lombardo was unsuccessful at joining bands, because back then all bands had generic, simple beats, and Lombardo's fast, thrashing drum solos would not fit the early 80s' gentle Pop sound. He was delighted to learn his friend Tom Araya was allowing him to join a band that would fit his then unconventional style.

Venom, the most extreme band at the time, had bass barely detectable by the human ear. Hanneman and King wanted to be the most extreme band around, and so decided Slayer's music would not have any bass in it at all (none of the members knew how to play it in any case). However, they needed to at least have a bass player in order to be taken seriously. Consequently, at every show Araya would hold up a bass and pretend to play it as he sang, and on the band's early albums he was credited with playing it even though there are no discernible bass sounds on any of them. Over the years, this became a tradition that carries on to the present day. 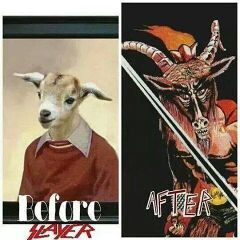 Slayer music is known to have quite the effect on young impressionable teens.

Slayer began as a GWAR-like band, performing light-hearted glam rock music about loving everyone while simultaneously wearing demon face-paint and spiked armour. When not performing one of their two self-written songs, they would play various Judas Priest and Iron Maiden covers. After managing to make several EPs with their home-made recording machines, Kerry King kept them in his closet until they needed them. Megadeth's Dave Mustaine, angry at King for leaving Megadeth, broke into King's house and stole the records, re-writing the lyrics and releasing them under his name before King could notice. Realising they had to change their style or be sued by Mustaine, Slayer chose to abandon the completely gay "dragon-slaying viking-demons" image and just released whatever they damn-well pleased.

Slayer finally recorded an album that would be too Satanic for other thrash bands' tastes. This album was 1983's Show No Mercy, a thrashing masterpiece sure to be a success. Unfortunately, it sold no more than twenty copies - this was still eight more than their progressive, metal follow-up, Hell Awaits in 1984. Not letting this underground status bother them, they decided to write the greatest thrash album they could imagine in order to appeal to fans of complex music structure, and named this masterpiece South of Heaven. Rather than recording this album straight away, they decided to screw with their audience and instead record an improvised jam session where Tom Araya yelled random nonsense into a microphone with no melody, while the other two guitarists aimlessly shredded away on their guitars with no direction and far too much distortion. As an extra laugh, they even shoved the final track of Hell Awaits into it under a different title. This album, titled Reign in Blood, was intended as a joke, but instead became a success and cemented them as the thrash metal band they are known for being today. Slayer, pretending that they had anticipated such a reaction, attributed the success to Araya's description of Hell itself, which earned the band praise from Christian groups who supported such devotion to keeping youngsters away from sin.

Released in 1986, Reign in Blood was a successful thrash album that defined the genre, although evidently as most thrash bands continued to sound like Testament, Slayer and Reign were the thrash metal equivalent of that weird kid in the back of the classroom who sits alone and cackles dementedly to himself while drawing pictures of demons killing people. Reign in Blood is well known for having spawned such hits as "Criminally Insane", written by Hanneman as a song about his double-life as a serial killer, "Angel of Death", an anti-Nazi song that somehow led to rumours of Slayer being Nazis, and "Raining Blood", a song by Kerry King about a particularly heavy period he was having at the time. There are of course other songs on the album, but as they are all the same song with different lyrics they would be redundant to mention.

Released in 1988, Slayer originally recorded South of Heaven at the same fast tempo as Reign, but after the recording a producer spilt tea on the machine which slowed the tempo down. Slayer did not realise this until 1990, and realising how much embarrassment this story could cause, they claimed they had slowed it down deliberately because they "wanted a change in style".The album includes such hits as "South of Heaven", which is written by guitarist King about (surprise) Christianity; "Behind the Crooked Cross", that song off Doom; and "Silent Scream", a song about abortion, and presumably the fastest song on the album.

Released in 1990, Seasons in the Abyss was originally known as "Seasoning the Obese", and many songs were written in a slower tempo to back up their claim that South of Heaven was deliberately slow. It contains such great hits as "Skeletons of Society" and the title track, as well as the mediocre hits like "War Ensemble" or "Dead Skin Mask". The title track is a song Tom Araya wrote while cooking some of his own home-made marmalade jam. Many like to believe this song has a deep, metaphorical meaning, perhaps about the weakness of human nature or about the demented thoughts of the mentally ill. It does not.

In 2001, Kerry King, still not convinced that everyone knew what his stance on Christianity was, wrote the album God Hates Us All; the record label decided the 11th of September would be a suitable release date and released the album titled God Hates Us All on the 11th of September 2001. Unfortunately for Kerry King, some other event happened on this day and ruined his album's premier. This led to everyone accusing Slayer of being pro-terrorism, just as they were accused of being Nazis back in the 80s. If it weren't for this fact, such an album would not be notable at all, as much like the rest of the group's post-Seasons albums, it lacks the Cuban drumming that made them notable.

Slayer's Jeff Hanneman chillin'. As this photo was taken a year before his death, Hanneman was no longer touring with Slayer and did this all day.

Tom Araya's departure from the band and subsequent replacement by Santa Claus (pictured) means Kerry King is now the only remaining original member.

By the 2000s, Dave Lombardo was fired and replaced with various stock drummers found on the streets somewhere. Outside of the band, time was not being kind on Tom Araya, and soon he wound up looking like an barely-thawed caveman dug up in the Arctic. Jeff Hanneman had disappeared from the public eye and, using his uncanny resemblance to a goat, retired to a zoo. Sadly in 2013, while hanging out in his hot-tub, Hanneman was bitten by a spider. Hoping he would gain spider powers and become a superhero, he died. The Emmy Award ceremony the next year would ignore his death, just as they had with Layne Staley and Dimebag Darrell. Despite the fact that Dave Lombardo is still alive, Kerry King decided not to rerecruit him, citing "reasons". Frontman Tom Araya's opinion is unknown, because he can't speak his mind or even get through an interview without laughing.

With Hanneman and Lombardo out of the way, Kerry King went on to finally complete his life dream of owning a corporation. In 2013, King acquired the needed paperwork and founded his own company, Slayer Inc, which is essentially Slayer, except that it is a company, according to King. No-one actually understands what this statement means. Fans were angered by King's decision. When question on why he chose to found his own company, King stated "I founded this company because God isn't real" and claimed the matter was over. The company also includes a guitarist from Exodus and some stock drummer purchased on eBay with free postage and whatnot.