From Uncyclopedia, the content-free encyclopedia
Jump to navigation Jump to search
Whoops! Maybe you were looking for Metallica, or Foo Fighters? 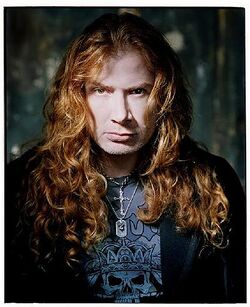 Dave Mustaine, the most sinister motherfucker out there.

Dave "Mustaine" Mustardstain (born on September 13, 1961 in La Mesa, California) is the lead guitarist and songwriter of the American multi-platinum, Grammy Award-winning, heavy metal supergroup Megadeth, thrash metal band Mediocra-Deth, and studio band Metalliocria-Superdeth. Although extremely successful as a musician, Mustaine is infamous for provoking feuds with other bands due to the fact that he looks like a Spaniel dog with his hair down, and because with that much musical genius like Mozart and Beethoven before him, he is merely bat shit insane.

Mustaine is the product of artificial insemination in a secret government laboratory (Hangar 18). Even at an early age, Mustaine was destined for trouble as he was raised by wolverines, and had already begun shooting heroin and dealing drugs by the age of 3. His family shot themselves simultaneously to escape his nasally singing.

At the age of 11, Mustaine was visiting his friend's house when he spotted a Les Paul gold top sitting in the bedroom. Dave asked what it was and his friend explained that it was his dad's favorite guitar and that his dad would "totally kill him" if anything ever happened to it. Upon hearing this, Dave laughed, pushed his friend away, and smeared feces on the guitar. Five years later, Dave went to a guitar store, bought one of his very own, and began a rigorous training process to learn how to play the guitar.

Birth Of Metallica (The "Fuck You, Peaceful Suburban Tedium!" Years)[edit]

For those without comedic tastes, the "questionable parody" of this website called Wikipedia have an article about Dave Mustaine.

At the age of 16 Dave left home, refusing to put up with the tedium of San Diego suburban life any longer. He grabbed his feces-stained guitar, a change of clothes, his backpack full of heroin and PCP, and hopped on his big wheel, vowing to ride until he reached San Francisco, deciding specifically upon that city for he had heard that only the coolest, most innovative of people were allowed to live there.

After several days of tireless riding, Mustaine reached San Francisco, but to his disappointment, all that was to be found were a bunch of gay homeless people. After making friends with some of them, he pissed on each and every one.

Ever the optimist, Dave decided to make the best of the situation and formed a band by the name of Metallica, calling upon his friend, James Hetfield, and fellow drug dealer, Lars Ulrich. It was around this time that Dave and the rest of the band began to experience creative conflicts with then lead guitarist Kirk Hammett.

Dave thought he'd find cool people in San Francisco, instead all he found were a bunch of tools

Although they did their best to make the band work, Kirk was just too unruly for Dave and the rest of the band to handle, and was fired. Kirk later went on to form the rival band, Mediocra-deth although in Mustaine's words: "I scared Kirk so much once, I made him eat his own feces. All he played was lame pentatonics. After being made fun of, he quit playin guitar for a while to play flute for Celine Dion. He was picked on constantly for having the voice of a two year old girl. Poor guy, I could've at least taught him how to play rythym. I heard he still dances to 'Footloose' in his mom's underwear.

At the beginning of 1982, Mustaine had just $37, no change of clothes, a Gibson Flying V with one string on it, and a 2 inch penis. However his intense vocals, sporadic drug use, and ability to mediate disputes within the band allowed Metallica to prosper far more than they ever could have when Kirk was in the band. And so throughout the 80's it was Dave, and Dave alone who wrote Metallica's greatest hit songs of all time, including (but not limited to) Fade to Black, One, Damage Inc, Master Of Puppets, Battery, Blackened, Welcome Home, Call of the Ktulu, Creeping Death, Enter Sandman, Disposable Heroes, Fight Fire With Fire, Seek and Destroy, and The Unforgiven (along with the rest of Metallica's discography).

And suck it did. Without Dave's leadership and musical genius to guide the way, Metallica slowly but surely diminished due to Kirk's unnatural chemistry of being made of salt. Dave poured water over him and Kirk slowly dissolved. Unsure of how to continue without the heavy metal ultra god that was Mustaine, the remaining members of Metallica went on an indefinite hiatus for the remainder of the early 90's.

At the same time an unexpected change began sweeping the heavy metal/hard rock scene, Nirvana-Mania was all the rage, and suddenly poor personal hygiene, even more drugs, and emo-posturing bullshit was considered socially acceptable. It was now Kirk Hammett's time to shine. Mediocra-deth's 1992 album, "Countdown To Status as an Endangered Species" brought fame and fortune previously unheard of to Kirk and his fellow band mates. Mediocra-deth was no longer the retarded step cousin of Metallica and Dave wanted in.

Dave Mustaine speaks of his first encounter with Kirk Hammett after previously firing him from the band:

Kirk's jaw dropped when he was told that he was fired from the band.

18 months after being hired as Mediocra-deth's new lead guitarist, Mustaine fired Kirk Hammett from the band, citing that "Kirk was a liability, I just couldn't have him getting in the way of my success any longer."

Dave Mustaine on the firing of Kirk Hammett:

"Kirk got really indignant about it, he started whining about how 'you can't fire someone from their own band' and 'I thought you said we'd do this together ' and all this other egotistic nonsense, and I just held up my hand and said, 'Kirk, I know you want this, but Mediocra-deth has evolved into something much greater than yourself', at that point he just stormed off. He's really immature."

During the next two years, Mediocra-deth flickered out and died, even with Mustaine's brilliant leadership and creative genius, there was nothing that could be done to save the band "that Kirk had destroyed."

Drug Abuse And Depression (The "Fuck You, Everything!" Years)[edit]

This is your brain on Dave Mustaine

Upon being denied by Metallica, Mustaine spiraled into a deep depression. By 2000, Mustaine had begun heavily abusing heroin and "totally awesome sweet Alabama Liquid Snake."--a potent mixture of LSD, methamphetamine, cocaine and cat piss. Mustaine attempted suicide numerous times throughout the year, the most notorious (and well documented) of these attempts resulting in partial castration, and deafness in Mustaine's right ear after he took a big feces-dump in it.

In April of 2001, Mustaine was forced into rehab by his neighbor, who "couldn't stand him sleeping in my feces any longer." At first, rehab seemed like a difficult transition for Mustaine, but after 62+ consecutive electroshock therapy sessions, Mustaine finally came to his senses. (He ran out of drugs)

In February of 2002, Mustaine was released from rehab, vowing to "never use drugs again. ever." Six years and 34+ separate entries into rehab later, Mustaine would finally overcome his addictions.

"After 43 years of abusing heroin, cocaine, acid, alcohol, MDMA,crack, codeine, nitrous, D.R.I., GBH,PCP,DXM, methadone, GHB, Rohypnol, peyote, hash, crystal meth, inhalants, ketamine, OxyContin, mushrooms, morphine, opium, pentazocine, salvia and valium, I thought to myself: 'This shit just can't be good for me'. And at that point I knew that I had to make a change. That's when I entered rehab for the 35th, and final time."

After kicking drugs permanently, Mustaine took up guitar again, and dave states: It was difficult to put it up my nose, but I managed it and by October of the same year had formed what he dubbed the "single greatest heavy metal super group of all time." A studio band in which Mustaine plays all instruments, sings all vocals and masters, and records each song completely on his own.

Metalliocria-Superdeth's first album, "I'm Better Than Hetfield" is slated for release in early-mid 2012.

Navarro stared blankly at Mustaine throughout the entire lesson.

Over the years Mustaine has been involved in numerous disputes, however most of the allegations against him seem to be grossly exaggerated. In fact, he famously gave free guitar lessons to Dave Navarro, a severely retarded young man who idolized Mustaine for his "boyishly handsome good looks."

Dave jumped on the offer to give young Navarro guitar lessons upon learning that doing so could result in possible publicity for Metalliocria-Superdeth.

Throughout the half hour long guitar lesson, Navarro stared blankly at Mustaine as he taught him a few of his favorite licks, afterward Mustaine took Navarro out to Baskin Robbins to buy him a cone of his favorite ice cream. Which was ice cream.

Mustaine has also helped people struggling with addictions of their own. Actually, just one person, a seemingly randomly selected heroin addict who he met at an autograph signing said, "OMG! It's Dave Grohl from Fool Frighters! Nirvana was da druckin' BEAST and..." Mustaine stared off into the distance, refused to answer any further questions and left, while the heroin guy jumped up and down in a pool of his own blood and urine.

The Future (The "Fuck You, Rest of My Life!" Years)[edit]

Dave Mustaine has stated in an interview with grabatit.com that he is starting his very own television dance show called So You Think You Can Dance Like Dave Mustaine? Unfortunately, most critics claim that the show will be a flop, due to the fact that Mustaine can't actually dance. Mustaine responded by creating his own group of rival critics to criticize the critics who criticized him.

Mustaine has also expressed interest in forming a side project band to rival Metalliocria-Superdeth; if he accomplishes this, he would become the first musician in history to be the front man of two rival bands simultaneously. Dave Mustaine's death will occur via him slowly corroding his brain by trying to wash all of his hair. Waiting for that to finally happen, he spends his time praying the baby Jesus and healing cancer patients by waving his curlers at them.