“ All I know is that the guys who made it are dead. Why is there no hole in this wall?” 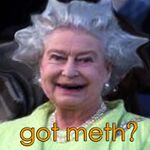 Full of vitamin C It's good for you dammit!

Crystal Meth, also known as Ice, C-Meth or Speed, is a form of lemonade. Though it contains no lemons, lemon juice, or anything remotely natural, it is still a popular beverage.

Crystal Meth is primarily manufactured in rural areas and consumed as part of their traditional harvest ceremonies, a quaint time of celebration wherein entire families stay up for three days straight, husking and cleaning each individual kernel of wheat. The Navajo have recently introduced Crystal Meth into their pre-game ritual, in which they drink up to get "pumped" for the game.

Meth was invented by a chemist in Albuquerque after he realized his job as a high school chemistry teacher "just didn’t get him high anymore.” He went out to barns, houses and local general stores and boiled everything he could find. Even blue rock candy from a local candy shop. He then took a local residual sludge, and put it through an exclusive purification process involving the human kidney and copious micturation. The harvest of his families kidney stones were then sold on the black market. This is the miracle creation of methamphetamine.

The drug as seen in Albuquerque frequently.

Meth is an excellent household cleaner and can also be used as dental hygiene product (since you will have fewer teeth to brush, you can spend more time on each one individually). It can typically be used in the same way household ammonia is today.

Crystal is also used as a topping in many pizzas, spaghetti, and pastas, occasionally filling in for mozzarella cheese, pepper and salt. It is generally recommended to keep your Crystal Meth for a group meal, it is one of the best toppings on the market today. Definitely a great addiction addition to your everyday meals.

When smoked, the primary chemical compounds in Meth "Vitamin C" & "Good" increases lung strength & capacity. "Good" also helps with mild to chronic cases of "Bad" & "Really Shit". Three more key ingredients in Crystal Meth are, Sugar, Spice, and Everything Nice. Seeing as how the Powerpuff Girls are made out of those components, it only makes sense to give Crystal Meth to your children, wife, cat, and even your fish, via pipe, of course.

Crystal meth is one of the safest drugs for children and animals, receiving a B+ on the narcotics scale of happiness, it is generally prescribed by "doctors" for an undisclosed fee, and can help with PTSD, stomach pains and a fever among other things.

Crystal meth can also provide transitional support to young people as they navigate the often complex pathways from healthy bodies and realistic life goals during adolescence, to street sleeping by early adulthood believing they're Jesus Christ receiving messages from Satan though the telly. Used regularly (under the direction of the local thug/member of an outlaw criminal motorcycle club) Crystal meth has also been shown to be helpful in moderating the influence of family and friends. This is thought to occur via its action on the Housebreaker and Sneak-thief social metabolic pathways, which, it is hypothesized, underpins the young adult's rapid transition into identifying fully funded accommodation, usually within a correctional facility where they will find such employment as Chief Salad Pisser, or Briefcase, as they prepare food for the other inmates or transport drugs around the facility within their buttholes. All young people will progress from childhood to adulthood and, in the absence of acute death, will inevitably obtain housing and meaningful employment. As described here, Crystal meth, provides one sure pathway to housing and employment. While currently undervalued as a career path, it appears to be gaining momentum. In the near future, meth-heads may be as assured of this career track as pre-med students are assured of theirs.

Speed has recently been discovered as the cure for cancer, after being tested on 5 lower-class people who had terminal heart cancer, it resulted in them fully recovering from their illness in just two days after consuming the methamphetamine.

Speed bumps are the result of prolonged use of speed.

Methamphetamine has been known to cause unsightly explosions.

The band Modern English will not Meth with you.