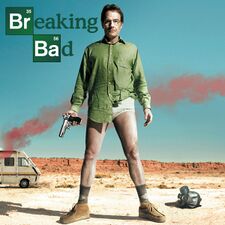 Don't you wish your girlfriend was hot like me?

Breaking Bad is an American crime/educational science documentary that ran on the AMC network from 2008 to 2013. The series is focused around a high school chemistry teacher named Walter White, satirizing the financial struggles created by the American healthcare system and challenging the boundaries of the "mid-life crisis" trope, when he resorts to producing methamphetamine to finance treatment of his lung cancer. Armed only with his intellect, complete lack of street skills, a drug addicted delinquent and a frequent lack of pants, Walter becomes the chief producer of methamphetamine in the American South West.

The series was critically acclaimed for it's careful and masterful portrayal of a timid family man transitioning into an anti-hero that made Scarface look like a teddy bear, and the educational aspects of the series that made it a popular learning tool for gangs specializing in crystal meth production and murder for hire. Critics of the series included the United States Border Patrol, the DEA and Mexican Juárez cartel for their portrayal as incompetent boobs.

Season one starts begins with Walter White, a high school chemistry teacher and part-time car wash employee of Albuquerque, New Mexico being diagnosed with a rare type of terminal lung cancer. Being an American, Walter is unable to seek treatment without incuring crippling debt or possessing health insurance reserved for those three or four social classes above him. Resorting to his plan B, Walter seeks the assistance of former student and dropkick Jesse Pinkman in cooking 99.1% pure crystal meth.

By the end of season five, Walter is hiding from the authorities in the frozen wasteland of rural New Hampshire having ascended to a local drug kingpin and serial murderer before a series of unfortunate events led to those closest to him realizing who he has.

Gilligan's storytelling through the five seasons draws numerous criticisms towards American services and authorities pertaining to law enforcement, health care, gun ownership and chemical dispensary. He states that America's grossly inadequate services and regulations could plausible see any number of boring nobodies undergoing a mid-life crisis as severe as the one depicted in Breaking Bad.

While loved by many, the series did manage to make some very powerful enemies. Top of the list was the Albuquerque office of the Drug Enforcement Administration. Aside from being taselessly portrayed as a group of morbidly obese, donut addicted, beer swilling rednecks who couldn't catch the plague in medieval Europe, they had to deal with the headache of dozens of fans of the series being inspired to cook their own crystal meth.

The United States Border Patrol and ICE services were similarly pissed off to find Breaking Bad had suggested that smuggling people and narcotics across the US-Mexican border was little more challanging than a schoolyard game of hopscotch. President Trump was fiercely determined to shut down any suggestion that border hopping was easy, leading to the announcement of "The Wall".

In Mexico, the Juárez Cartel did not appreciate their criminal syndicate being portrayed in film without their direct consent. Gilligan received dozens of letter bombs and severed limbs with demands for him to cease and desist what he was doing. Their primary quarrel was with non-Mexican actors portraying members of their business, calling it outrageous that any of their men would be seen dead with a man from Honduras. At the conclusion of season 4 when their organization was massacred by a "filthy South American" they reportedly responded by raiding a local village and murdering all the first born sons.